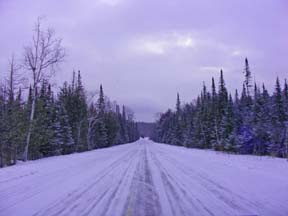 For the last two years, I’ve been sticking to the shortest road route from home to Northport, conserving fuel. Last Friday the back roads called my name. This uncharacteristically straight stretch (most of our county roads wind around hills) always reminds me of the U.P. “Up North” depends on your starting point. It’s a state of mind.

Winter Carnival approaches, now only eleven days away, and there’s no fear of a snowless event unless the weather changes drastically between then and now. The question has been raised, will there be an OUTHOUSE RACE again this year? The answer is YES! There’s even a rumor of a women’s team in that event! Stay tuned, and plan to be there!

And from the Great Beyond:

Suze Orman will be on “Oprah” today. WOMEN AND MONEY: OWNING THE POWER TO CONTROL YOUR DESTINY—great title, solid ideas, as always from this financial guru. I’m a believer in her message, though more backslider than practitioner. (What can I say? It’s the truth.)

Tomorrow AM radio from Louisiana (any chance in the universe I could tune in?) will have an interview with Geraldine Brooks, whose new book PEOPLE OF THE BOOK is right up front on the counter at Dog Ears Books, singing its siren song.

Today is the 199th anniversary of the birth of Abraham Lincoln.

(Thank you, Shelf Awareness, for bringing me these bits of news from the world outside.)
Posted by P. J. Grath at 5:23 AM

Northport outhouses? Here's a story for you.

Thanks for the story, Susan. My maternal grandparents in Springfield, Ohio, had an outhouse until the late or middle 1950's. Indoor plumbing was limited to a hand pump in the kitchen, inside only because the kitchen had been built around the pump.

PEOPLE OF THE BOOK has called to me for awhile, too. I've resisted so far, though I can't say why. It seems like a great example of a "Walter book" as we sometimes say.

I don't know if you can find tomorrow's interview online or not, but she did one on NPR that you can find on the NPR web site.

Inquiring minds (one, at least) would like to know which road you've shown us in that lovely, snowy photograph.

The road! Well, I think it's called Johnson Road, though one end that used to be called Johnson is now called Jacobson--I think!--but this is the other end. If you drive south of Northport on M-22 and take the first real road to your right, that's it. I was coming from the other direction, so the view in the picture is looking toward the 22 intersection closest to Northport. Clear as mud? Remember where the lady's-slippers used to be? And the road you'd take to get to the trillium hill? That's the road.

Straight from the horse's mouth; outhouses are still being used right here in Leelanau County, but don't tell anyone.

Thanks for the road info. Found it on Mapquest, and it is one I've ridden on.

Due west across Big Blue lies Rhinelander, Wisconsin, where my parents bought and renovated an old house in 1950-51. They installed indoor plumbing and took down the outhouse. Ever frugal, they sawed off the top of the two-holer, put in a window and a new floor, and turned it into a playhouse for me. I was proud of their ingenuity - took me decades to realize not everyone who heard that story thought it was an example of good parenting . . . .

We have stayed overnight many times in Rhinelander, breaking up our overland journey from Northport to St. Paul. I love the beautiful blue dome of the courthouse at night.

As for outhouses, I spied one on the corner in front of the Filling Station today, obviously destined to be in the Winter Carnival race. Our own came from a friend's farm. David thought he might use it for a writiing studio, but I convinced him he should let me keep garden tools in it.