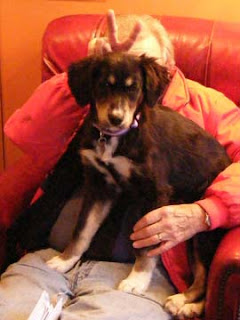 Who’s being silly here? We are infatuated with our puppy! "She landed in a tub of butter when she came to live with you," a friend said, quoting what someone had said to her when she got her new dachshund. Well, we think we were incredibly lucky to find her. There's a line in the musical "Showboat," when the director of the troupe asks the potential leading man if he's a quick study, and he answers in a single word: "Lightnin'!" That's Sarah. She went to the vet for the first time today and has, he says, no fleas, no mites, no worms. A little infection in one ear but otherwise fit as a fiddle and—can this be true?--likely to get up to 65 pounds as an adult! So much for our idea of getting a small dog!

Deciding I needed to lighten up a bit after all that Aristotle, I took a cookbook to bed with me last night. It’s the latest (and last, she says) Alice Waters, SIMPLE FOOD, and right at the beginning it hit the culinary spot for me when she said she hoped her book would help people use cookbooks for inspiration, without feeling the need to follow every line slavishly. That’s the way I generally use cookbooks, and most people I know who love cookbooks read them as much for pleasure as for following recipes.

Waters (I want to call her “Alice,” because her sister is a good friend of mine, but Alice and I have never met) is very insistent on fresh, organic, locally grown products. To say she “recommends” farm markets is putting it mildly. Not long ago, the question of local food came up at a small dinner party where I had served pomegranate and chocolate for dessert. Yes, I do stray from apples and cherries once in a festive while, but basically I’m on the same page with Waters, Wendell Berry, etc., etc., when it comes to local agriculture. I see this not simply as assuring fresh, healthy food and supporting farmers in their tough business of making a living, but also looking to the long-term sustainability of community. There’s historical evidence that a dependable food supply is essential to any population’s security (cities have always been vulnerable during wartime, and tyrants make sure to feed as many of the people they want to tyrannize as possible), but that’s only the preventative side of food and community, the positive, emotional satisfaction of connectedness being more obvious and no less important.

I'd add maple syrup to AW’s list of kitchen staples. We use it on oatmeal as well as pancakes, and a couple of drops in a vinaigrette finishes the taste without being noticeable in itself, a tip from my friend Kathy Garthe, wife of an organic cherry farmer. I don't like to be without it in the house.

Another book on food I’ve been waiting for is PLENTY, and that finally arrived. The 100-mile diet idea started, the authors say, with company to feed at their remote Canadian cabin and nothing in the larder but one old head of cabbage. Someone caught a fish, others gathered berries, picked apples, what-have-you, and a memorable meal put together. (It was a one-dish meal, as described in the book, which sort of boggles the imagination.) I only just opened the book today, and then it was time to close the shop and get Sarah to the vet, but the idea is that for a year the authors lived on the food they could acquire within a 100-mile radius of their Vancouver home. I’ll give a full account in future.

There’s something about winter that makes reading and thinking about food almost as satisfying as eating. Well, almost….
Posted by P. J. Grath at 4:55 PM

Sounds like a very interesting cookbook that I should check out! We're trying hard to go local here, and plan to join a co-op this spring! I'm so excited about it.

I'm really not Anonymous -- I'm Susan! -- but this is the only way I can get in, for some reason. I've read PLENTY and loved it! Alas, sourcing local foods in balmy Vancouver is easier than in northern Michigan. Still, I've found one of the best ways to eat well all winter is to make applesauce -- lots of it -- in the fall. It keeps forever, and freezes even longer. Am just now finishing COMMON GROUND by Scott???, an account of a CSA (Community Supported Agriculture) farm out East. Beautifully written. Inspiring. Makes me long for my first earthworm sighting -- spring!

COMMON GROUND--I need to look in my own bookstore tomorrow! Title sounds familiar, and I think I have it in stock but haven't read the book yet. Glad you made it onto the comments page, Susan!

Diane, our nearest co-op is 40 miles away in Traverse City, but in the summer we have farmers' markets out here in the county and nice little farmstands, one of which is right on my way home.

I think people are starting to feel about local independent bookstores the way they've already started to feel about locally grown food. Is this wishful thinking on my part? I get a lot of hints in this direction, and I think it's all part of a desire to fashion unique, personal lives for ourselves and our communities.

Pamela, I BOUGHT Common Ground from you! :)

Susan, how funny! My memory is like a sieve--or like a really, really old, raggedy dishrag (more hold than cloth). I'm glad I had that good book for you here at Dog Ears!