Not Everything Victorian is Outdated 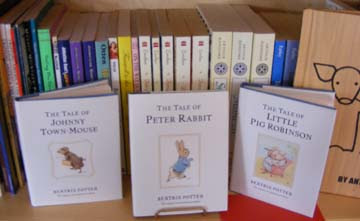 It’s the last day of the first month of this new year already. Author Margaret Truman, daughter of President Harry Truman, died two days ago. Here in northern Michigan, the wind has died down since yesterday, and now the sun has even come out. Outdoor scenery, though, while beautiful, is fairly monochromatic about now, though, so I’m turning my attention back to the warm coziness of my bookstore.

“I do dislike the modern fashion of giving children heaps of expensive things which they don’t look at twice.” Don’t we all? Well, Beatrix Potter expressed this sentiment over 100 years ago in a letter to her publisher, clarifying her personal preference that her own stories for children be brought out as small, modestly priced books. I am reveling in Linda Lear’s biography, BEATRIX POTTER: A LIFE IN NATURE, and am learning for the first time just how seriously Potter pursued both her art and her scientific investigations. The family connection with Millais, her admiration for Turner, the hundreds of botanic illustrations of fungi and solitary researches into their germination were all new to me. I’d known about her speculations regarding lichens and that her view was later vindicated but had no idea of the many trips to the Royal Botanic Gardens and the Natural History Museum, or all the happy hours spent outdoors, “botanizing” and collecting. And then she buys her own farm! What emerges from this biography is what one might call a “woman of substance.”

When we finally saw the film version of her life, “Miss Potter,” I wondered if the romance with Norman Warne had been a cinematic invention, some screenwriter’s ploy to bring the viewers closer to a Victorian woman. Such, it appears, was not the case: the romance was real. Had it not been for Norman Warne, would Potter have continued to direct her talents in the direction of science rather than children’s literature? Yes, there were already those “picture letters” to the children in her life, first versions of what would later become the wonderful little tales of rabbits, mice, squirrels and cats, but what a shame if all the rest of us could not have shared them, if my son and I had not had THE TALE OF JEREMY FISHER to read together or our dear NOISY-NOISETTE, the French version of SQUIRREL NUTKIN.

I am so inspired that I’ve re-ordered several of the little Potter titles, still (in the anniversary edition) well under $10 each. Now that’s a children’s book!
Posted by P. J. Grath at 8:52 AM