A Day at Home 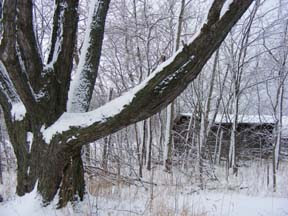 The little popple grove between the house and the old chicken house takes on an air of mystery in winter. To tell the truth, it has mystery in other seasons, as well. I discovered the old daffodils under the silver maple (by the old well) early on, but it was three springs before I found, quite nearby, the clouds of yellow violets, one of my most beloved woodland wildflowers. This is part of baby Sarah’s new world now, and she explores with all the eagerness and enthusiasm of the puppy she is, her nose leading the rest of her small, wriggling self tunneling into the snow.

Reading Aristotle this morning, I was struck once again by his emphasis on the importance of good habits in character-building and, while not disagreeing, could only wish he had left a bit of room for the possibility of redemption. “If a man, acting not in ignorance, commits the acts that will make him unjust, he will be voluntarily unjust” is a reasonable statement. As a lifetime of health choices contributes either to good health or disease (heredity and fortune playing their parts), he points out, a lifetime of moral choices creates character, for which the person is responsible, just as, “once a man has thrown a stone, it is no longer in his power to call it back; still for all that, it was in his power to throw it, since the source of the act was in him.” In similar fashion, Aristotle argues, once a man has created his character through repeated actions, becoming unjust or licentious, “it is no longer open to him not to be so.” Is this so?

We can agree that the man had the original power to become just or unjust, and we can see that some become unjust in the course of their lives. The question is, can settled character never be overturned? To answer the question Aristotle’s way argues against any hope of rehabilitation. But if the unjust cannot be happy (again, in Aristotle’s terms, but a case could be made on other grounds, as well), could the problem be, in at least some cases, not impossibility of change but lack of vision and belief?

Redemption does not change anyone’s past, but however short one individual’s remaining future, an example of redemption, of a life retrieved, can inspire others. True stories of human lives that have been turned around, along with true stories of dogs and horses gone “bad” and “brought back,” keep me from accepting Aristotle’s conclusion. Horses and dogs must have the choice made for them. Human beings have to choose for themselves. A man is the thrower, after all, not the stone.
Posted by P. J. Grath at 10:24 AM

I love your last line here! That sums my feelings up perfectly. And nothing is more inspiring to me than a story of redemption.

Where else can one see a photograph like this one, picture yellow violets, and move on to thoughts about Aristotle and redemption? Your posts are a delight.

Aristotle might allow (if we could talk, and wouldn't I love that!) that the unjust man could have a change of heart late in life. What he couldn't change, though, was the life he'd already lived, and who can argue that? Redemption is real, I believe, but so is regret. Do I sound like that insufferable Mary in PRIDE AND PREJUDICE? Oh, talk about Freudian! I typed PRUDE AND PREJUDICE the first time and had to backtrack! But maybe I need to lighten up a little. I think I'll read a cookbook tonight!