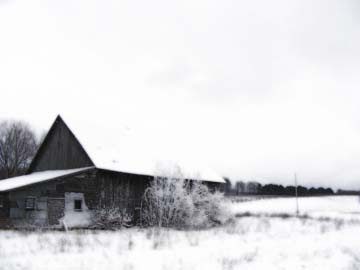 The bookstore Christmas tree is gone from the window, decorations and other accoutrements put away, large houseplants in floor pots and a couple windowbox inserts of overwintering geraniums replaced so as to capture maximum light. I consolidated paper and cardboard for recycling and moved stacks of other boxes (most full of books) back to storage, sweeping the floor of needles and remains of two ornaments I broke taking them off the tree. Sarah had several more short lessons (improving on the ‘Stay’ command, doing well on “Drop’ when she returns with a thrown toy), and she had her first meeting with another Northport dog, the Carpenters' dog, Cricket.

Having read ethics with morning coffee, at the bookstore I opened DOGSMART: THE ULTIMATE GUIDE FOR FINDING THE DOG YOU WANT AND KEEPING THE DOG YOU FIND, by Myrna Milani, to a wonderful chapter, “A Meeting of the Minds,” all about dominance and subordination in dogs, humans, and in households combining dogs and people, along with the subtle and sometimes confusing signals the two species inadvertently give each other. There was nothing that contradicted anything we’ve learned from Cesar Milan (what a coincidence the two names are so similar!),and I’ll go back now and begin at the beginning of this fascinating book. Or should it be more Chiang Lee tonight? Or first one, then the other? Housework and transferring class lists to gradebook can wait until tomorrow.

Sarah had a hard time on her leash after dinner. Not only was the air redolent of skunk (there's always been a skunk living in the barn), but at least half a dozen deer had crossed Claudia’s road minutes before we came upon their tracks. The little puppy nose wanted to immerse itself and follow. Sorry, Sarah! Good dogs don’t run deer!
Posted by P. J. Grath at 4:52 PM