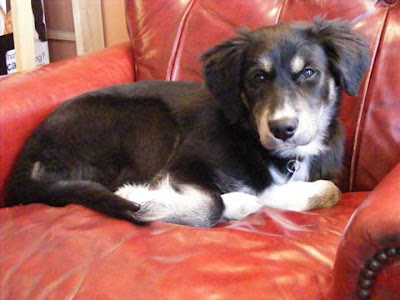 We were agreed that we didn't want a puppy. We were agreed that we wanted a small dog, one no bigger than Nikki, and David really wanted a lap dog, which would have meant something smaller than Nikki's 30 pounds. So yesterday we went to the Cherryland Humane Society and left with 4-month-old Sarah, whose paws indicate (our vet will tell us better when he meets her) that she may reach 50 pounds. But she is (besides being cute) very smart, friendly, affectionate, unafraid--and, well, irresistible.

Sarah? That was her name at the shelter. It may stick (as did Nikki's), but so far I'm calling her Sarah So-Far (like Maggie-Now in Betty Smith's Brooklyn novel). My suggestions of Missy (one grandmother's dog), Pepper (the other grandmother's dog), and even Eliza Bennett (Lizzie, for short) were rejected by David, and it was David who came up with the name Barkis (from DAVID COPPERFIELD) for our long-ago dog, so I'm not arguing with him.

So far Sarah is practically the perfect puppy. She slept peacefully all night long in her crate in our bedroom and hasn't had any accidents in the house. She's taken to the bookstore like a duck to water. When I called various customers to tell them their special orders had arrived, I told them also about Sarah, and everyone is eager to come in and meet her. She loves meeting new people.

Oooooooh, she's adorable! I just read your post about a week ago on your store's website about Nikki, and it absolutely made me cry. We're dog lovers over here too - two mini doxies named Ralph and Liesl. (Anyone know where the names are from?) Congratulations to you! I love fresh puppy smell!

P.S. I'm setting up links on carp(e) libris, and I've added your blog! I'll put your store in later when I get that link list up.

She looks perfect in that chair, so it seems you made the right decision. Dog Ears really does require dog ears, doesn't it? She's a cutie, and will be such nice company. I'm so excited for you. Enjoy the puppy time.

It's true - she is A-dog-dorable, and actually looks queenly in her chair, calmly folding her limbs as she awaits the next supplicant. I am happy happy happy for you ... so is Godfrey ... and now we want to get down to dog search business worse than ever (but we have to wait til AFTER Louisiana, sometime in February).

It's been a busy day today at the bookstore, with people combining picking up orders and shopping for books with meeting Sarah. Puppy breath, puppy ears--what's cuter? Wish you could all drop by to play with her.

The store is now complete. Fine books for intellectual stimulus, fine art for visual satisfaction, intelligent proprietress for stimulating conversation and a wagging tail for a true sign of welcome. Ambience perfecto.

Wowser! She's adorable! No wonder you couldn't leave the Humane Society empty handed. I hope she comes to the bakery tomorrow, but if not, I'll stop by the store to meet her.

You all are making me laugh with delight. David and I laugh with delight just looking at Sarah. She's so at home with us, it's as if she's been here her whole life already. One person today asked if she could read yet. "We only got her yesterday!" I protested.