THE ANGUISH OF SURRENDER, Part I 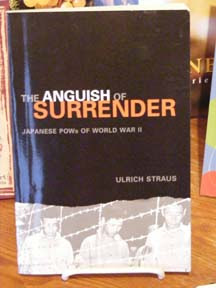 (This is a corrected version of the original posting.)

Like many retirees, Ulrich Straus wanted to write a book, and he did. Unlike most other books by retired state department people, he did not write a memoir but a book of history, a story from World War II that had not been told before in English, the story of Japanese soldiers and sailors taken as prisoners of war by the Allies in the Second World War. The plight of Japanese-Americans denied their civil rights and interned in camps during World War II is familiar now, even to schoolchildren; by contrast, the story of Japanese prisoners of war is barely known at all. Perhaps it took someone with Straus’s unique personal history to bring this chapter to light.

Leelanau County is Rick Straus’s retirement home, but over the course of his life, beginning in childhood, he lived a total of about 27 years in Japan. His father was a German businessman who was sent to Japan by his company during the Great Depression and later moved his family there. When Japan started to feel unsafe, the elder Straus brought the family, still German nationals, to the United States, where Rick finished high school and went on to the University of Michigan for its Intensive Japanesse Language program.

Enemy aliens could not volunteer for the military, but they could be drafted, and the story of how Rick, still a teenager, was drafted into the army is a story in itself but one I won’t get into here. He served in the military in post-war Japan as a translator of German and Japanese documents at the Japanese War Trial in Tokyo in 1946-48 (he was 18 at the time), later went back to Japan as a Fulbright scholar, and eventually went to work for the state department, finally serving as American consul general in Okinawa from 1978 to l982. It was an exciting life. His interest in Japanese POWs was natural: besides having lived in the country as a child, had the war lasted longer he would have been interrogating Japanese prisoners of war himself.

David and I first met Rick on the beach at Gills Pier Road, when his Samoyed approached our Nikki, their tails wagging. Fast-forward several years to 2001 when Rick asked me to edit the manuscript for his book, THE ANGUISH OF SURRENDER: JAPANESE POWs OF WORLD WAR II, subsequently published by the University of Washington Press in 2003. Everyone remembers the fall of that year. Waking from nightmares in the wee, dark hours, I would make coffee and sit down with the pages of an engrossing story from over half a century before. The work kept contemporary demons at bay but did not banish them utterly, for one very good reason: perception and treatment of enemies forms the thematic core of THE ANGUISH OF SURRENDER. When the project found a publisher, David worked with Rick in selecting photographs for the book. We were honored to be able to make our modest contributions to the large, important work Straus had produced.

Straus conducted thirty-five personal interviews with former Japanese POWs for his book, on top of copious documentary research, and when I say he tells the “life stories” of these men, that’s what I mean. He begins by tracing the development of the traditional Japanese military man from schoolboy indoctrination through formal military training. Never denying that Allied troops captured by the Japanese suffered terribly in captivity, he makes it clear that everything in Japanese culture up to the close of the Second World War taught that surrender was shameful and that those who surrendered had dishonored themselves. The Japanese had never even ratified the Geneva Conventions, their reasoning being that the enemy would not have to feed and house Japanese prisoners—there would be no Japanese surrendering—so why should Japan take on the cost of caring for prisoners?

Because they expected to be severely punished and believed they deserved it (as the Japanese military believed, too, of those they captured), Japanese POWs were overwhelmed to receive humane treatment, including good medical treatment and gift cigarettes, from their captors and guards. Amazed and grateful, they quickly began to see their captors as human beings rather than monsters, and most were eager to cooperate with the Allies. Escape attempts were rare.

When the Japanese government was sent lists of men taken prisoner, they notified the families that these men had been killed. Dying for the emperor was honorable; surrendering was not. Most of the prisoners, for their part, dreaded returning home, and many felt they would never be able to do so, that returning would bring shame on their families. Reality was kinder, and Japanese culture underwent deep changes as a result.

Coming Tuesday, January 22: THE ANGUISH OF SURRENDER, by Ulrich Straus, Part II
Posted by P. J. Grath at 4:32 AM

Pam,
You may not remember me but I am Ken Wylie's brother. I happened on your fine blog when I found Roger Landrum's review of Ken's lttle book of poetry.
So nice of you to host that critique. I do, by the way, agree that it is easy to read and clear-eyed. Really quite good, even as I am not objective in something written by my kin.
Back to my point. I liked Part One of your review of "The Anguish of Surrender" and am looking forward to seeing your next words. Good stuff.
George Wylie

Lots of people have been surprised and delighted by your brother Ken's poems. I'm glad you're interested in Rick's book, too, and hope you will visit, read and comment often. Welcome!

This sounds like a good book! I should look into it. Thanks for sharing! It must have been quite an experience to be the first one to go through the manuscript.

Rick's wife and agent had read it before I did, Diana, but it's always exciting to get at something before it appears to the general public.