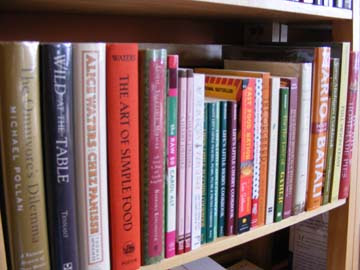 The air is colder today, but the winter sun is a cheery sight. It keeps getting brighter and brighter, too, as the morning goes on.

Small epiphanies for me usually come in the morning. When I hit the statistic in PLENTY today about food shipped nationally using 17 times the fuel (even with “cheap” oil) that regional food requires to get it to market, that Vermont maple syrup came instantly to mind, and the next instant brought the realization that I can buy the Michigan syrup in the plastic jug and transfer it to a glass container. Why didn’t I think of that right away? Or, I wonder if the co-op in TC sells Michigan syrup in bulk. Since I’m driving to town two days a week to teach, making a stop at the co-op wouldn’t be that far out of the way. (Diane’s comment was probably the seed for this brainsprout.)

I’m having a strange, emotional response to this book, PLENTY. The first teary-eyed sensation came with Alisa’s grandmother died, though it was early in the book, and I’d hardly had the chance to take the grandmother deep into my heart. Then there was the quotation at the beginning of the May chapter, “When the world wearies, and society ceases to satisfy, there is always the garden.” Then James wrote of their first garden salad from the farmers’ market, “The foods that overflowed our big glass bowl were not only the flavors of spring, but of this particular spring, this unique year with its hard rain and rare glory of sun.” I’m all verklempt! What’s going on here?

Farmers’ markets in this country are a phenomenon of the 1970s, the book says, and that may be true of country and small town markets, but I remember shopping at the big farmers’ market in Springfield, Ohio, with my grandmother, and Cincinnati had a huge open-air market that went back much further in time.

Coming soon in this space: THE ANGUISH OF SURRENDER: JAPANESE POWs IN WORLD WAR II, by Ulrich Straus. Meanwhile, see the new link in the list at right for a blog called "Collecting Children's Books," which I learned about from today's "Shelf Awareness" newsletter.
Posted by P. J. Grath at 8:03 AM