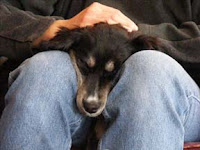 Here’s Sarah on Saturday, making herself comfortable in a friend’s lap. She’s had many adventures since then.

Half-moon (on the wane) bright over Claudia’s wooded hill, morning star bright over the wooded ridge to the east, puppy’s nose eagerly burrowing into deep, water-heavy remains of snow in the meadow--so my Tuesday morning began. Later this morning the sun disappeared behind dark clouds, leaving wet, muddy streets in the village (wet, glare ice in the driveway at home) and bringing a forecast of dropping temperatures and “hazardous conditions” through Wednesday morning. Michigan weather—gotta love it!

I’m going to treat myself sometime today to a little quiet reading, now that my Monday class is behind me and no new prep required for Wednesday. Last night after dinner I settled into my reading chair with GRUB, by Elise Blackwell, an entertaining novel about several young writers in NYC and their struggles to become published novelists. I’m enjoying it but must admit that, over halfway through the book, I still don’t understand the significance of the title. “Grub” is the name of the upscale restaurant in the neighborhood of one writer (where his roommate works as a waitress), but it has yet to play a major part in the story. Several one-word titles have appeared within the novel: OINK is one writer’s title, BAILIFF another’s, and the publisher of THE RELUCTANT LEPER wants to change that title to PONCHARTRAIN. The one-word title as marketing strategy? Perhaps. And surely there will be some shuffling of partners, suggested already by midpoint.

Belated official congratulations today to Jessica Stockton Bagnulo, out on the East Coast, a fellow bookseller whom I’ve never met in person. Jessica was the winner of this year’s top prize, $15,000, in a business plan competition, PowerUp, sponsored by the Brooklyn Public Library. The prize money brings her that much closer to realizing her dream: her own bookstore in Brooklyn, New York. You can peek into Jessica’s world, dreams and all, through her blog, the “Written Nerd” (see links list at upper right).

Later same day: Well, P.S. and don’t I feel stupid again? Devouring today’s book during all the stolen moment I could put together, I reached the end and found, opposite the last page of the novel, this note: “GRUB is an updating of George Gissing’s satire of the Victorian literary marketplace (NEW GRUB STREET 1891). It draws on it, borrows from it, and could never have been written without it.” So there you have it. Do you write? Edit? Publish? Sell books? Just read ‘em and love ‘em? You’ll have a good time with this one.
Posted by P. J. Grath at 9:06 AM