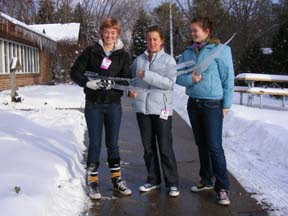 After a magnificently bright sunrise against clear blue sky, sunshine has appeared and disappeared today. Bruce is at the counter today--when he needs to be; when things are quiet, he’s in one of the red leather reading chairs—so I’ve been able to get out for a couple of walks in the frigid January air. These girls outside the library with their prize icicles were having a good time.

I had a good time in the early afternoon, reading Aristotle down at the Treasure Chest over a hot chocolate. Explaining how it is that he can say a man becomes just by performing just actions (answering the objection, How could he perform just actions if he weren’t already just?), Aristotle wraps up by saying observing that “most people, instead of acting, take refuge in theorizing; they imagine that they are philosophers and that philosophy will make them virtuous; in fact, they behave like people who listen attentively to their doctors but never do anything that their doctors tell them. But a healthy state of the soul will no more be produced by this kind of philosophizing than a healthy state of the body by this kind of medical treatment.”

Talk is cheap, Aristotle is saying. And even the philosophers can’t get away with talk alone. It is because life demands action that ethics (for all its theory) is the practical branch of philosophy.

Big book news today is the Literate U.S. Cities list, with Minneapolis at the top. I was glad to see that Cincinnati made the top 10 bookstore cities. Chicago was on neither list, which is sad.
Posted by P. J. Grath at 12:03 PM

On my first day back to work in the city, I'm jealous of Bruce in the Red Chair and anyone able to sip hot chocolate at the Treasure Chest enjoying a few moments with Aristotle. Oh well - my opportunity returns soon.

I remember our own searching for long icicles - what fun. Of course, I remember our licking them as if they were popsicles and now people are cautioned to not eat icicles - glad we missed that caution as it is great fun remembering both the icicle searching and the joy of tasting that cold icicle.

Oh, wonderful! Two comments, and neither of you commented on my silly error, which I am about to correct RIGHT NOW! Did you see it, or did you not? Too late (almost)!

Probably you did not mean this mistake, but your link to the literate US cities list doesn't work for me, due to a couple of typos.

I think you wanted http://www.ccsu.edu/amlc07/Overall_Rankings/Top10.htm

http://www.ccsu.edu/AMLC07/Default.htm has a little more info, too.

Thanks for pointing out this listing.

And, by the way, Happy New Year!

We enjoyed visiting with you at the shop. We've returned to Woodstock, and we've had much more snow since we got back than we had there in Northport.

Thank you so much, Walt. I gave up trying to get the first address to work and finally put in the second you sent, resulting in an operative link. Good to have you on board--for more reasons than one!