[This post has been waiting "in the can" and is getting its turn today.]

Our bed is snug and warm, air in the cabin cool when morning comes, until the Artist gets up in the dark to start the propane stove to take away the chill. First signs of dawn in the east come before six o’clock, but we do not usually hurry to get up and begin our day — time enough for that when the cabin is once again a comfortable temperature. Nights, after all, are cold in the high desert: at our ghost town elevation, winter nighttime temperatures have generally been below freezing and occasionally well down into the 20s. Now, in early March, low 30s are the overnight norm, with days as warm as high 60s. 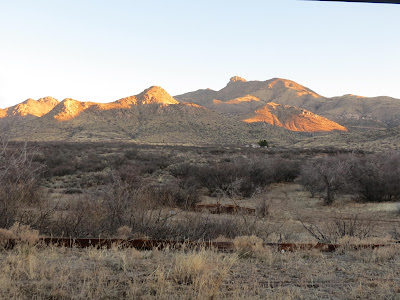 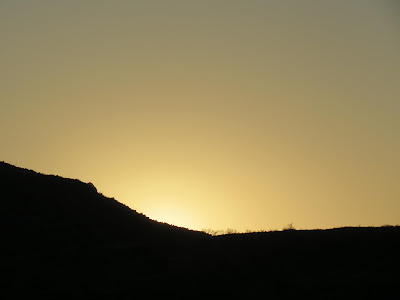 Sunrise is most often simple and uncomplicated, but it can also be as variable and colorful as sunset, depending on the morning. Whatever the sky, whether clear or streaked with clouds, the mountaintops and high slopes receive the sun before the sun has cleared what we see as the eastern horizon. Mountains are like lakes and oceans and islands. Like lakes and oceans, they never appear the same two days or even two hours in a row, and like islands seen from shore they seem to move around in the landscape, even though we, the viewers, know very well that it is our position, not theirs, that is changing as we go from place to place.

The landscape of my ghost town can look dead and empty in winter. Where are the leaves, flowers, animals, and birds? Is there no sign of life whatsoever? 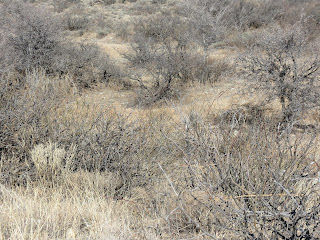 You must go out into it on foot, unhurried. Soon you hear a bird and look for it in a nearby stunted tree. It rarely works to chase after birds. The surest way to see them is to choose a spot, a shady spot if you can find one, and stand still as a statue, watching the sky and branches and ground around you. The birds soon appear. Brightest these mornings is the cardinal, a reliable visitor. More exciting to me, because we have them not in Michigan, is the pyrrhuloxia, Arizona’s “silver cardinal.”

Most beautiful singer, of course, is the mockingbird. Most numerous birds are sparrows, but not every dull-brownish bird is a sparrow, and morning may bring others close enough to photograph and subsequently identify with the help of good field guides. See below a cactus wren in two different settings, followed by a less-than-optimal shot of a curved-bill thrasher, identifiable not only by his bill but also by the golden eye visible between two twigs.

A rabbit frequently appears around the cabin in the morning, but I have not caught him or her on camera, though I keep trying. We also have yet to see other notable backyard visitors of 2015, a rock squirrel and a Western fence lizard, the latter flashing his brilliant blue throat in the sunlight. I will be watching for lizard and squirrel as winter gradually warms into spring. 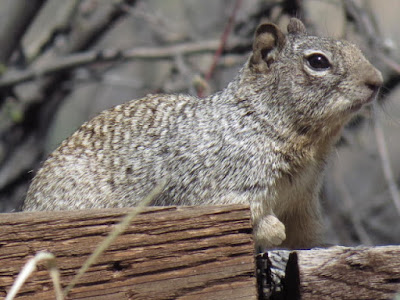 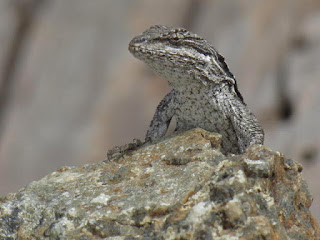 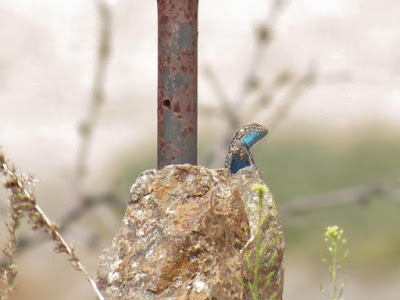 Meanwhile, from the window over the sink, I see a cow and calf ambling down the dirt road behind the cabin, as nonchalant as early morning flaneurs on the Champs Elysées, leading their lives without reference to any human watcher. 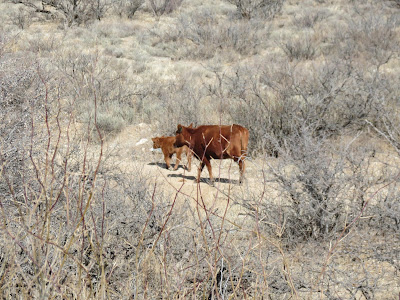 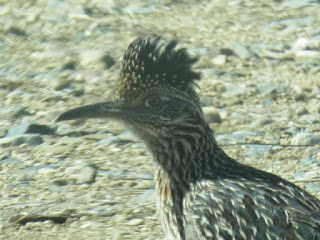 On the way to town on morning errands, we see roadrunners, sometimes as near as our own driveway. Surely the roadrunner is the drollest bird in Arizona! People must have found them amusing long before the cartoon character’s invention, the cartoon an effect rather than a cause. When a single day may bring as many as five of them to our attention, the Artist thinks I should start taking them for granted, but I cannot. Not yet. They surprise and delight me every time. Well, except for a dead one on the highway one morning. I could hardly believe my eyes, seeing a roadrunner, unlike his cartoon doppelgänger, reduced to permanent squashed immobility. I wanted him to jump up, pop back into his former, rounded, quick-footed self, and go hurrying off to new adventures. 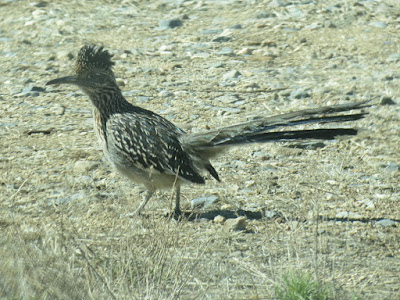 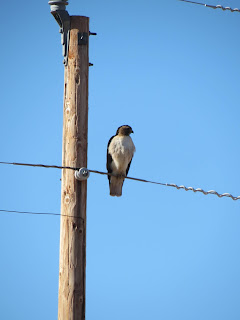 At a certain mile marker on our road between Dos Cabezas and Willcox, I always begin looking for hawks. Wires close to utility poles are productive sites, but a tall mesquite or occasional small tree can also hold a hawk, and it’s a rare day that we don’t see at least one. I would like, eventually, to be able to tell each species from a distance, either at rest or in flight. That, however, is a long-term goal.

So far we have been able to watch sandhill cranes only in flight formation, high above our heads. Their voices may first alert us to their presence, and we scan the air overhead, trying to see them, but other times, long before we hear them, I spot in the distance something that looks like a faint, drifting scarf of dark smoke. No, it doesn’t move like smoke: it is, once again, a shifting, graceful, phantasmagoric cloud of cranes. 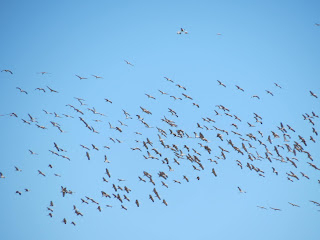 At closer range, the flock in the sky — and often several smaller flocks gradually come together, the aggregate number gradually increasing into the hundreds or maybe thousands — has the appearance of an enormous school of ocean fish, changing direction like a single animal, wheeling and swirling and changing shape like ink dissolving in water, except that the birds do not vanish in the air. Instead we see a thousand small black marks in motion, and then, as they wheel in the sun, all at once the school flashes shining silver. I notice that long before they are low enough to be seen as individual birds, and even without hearing their voices, we know at our first distant glance that this distant aerial dance school is one of sandhills. This is because while geese or ducks are directional in their flight, clearly going somewhere, sandhill cranes seem to join together and fly for the thrill of flying and the joy of each other’s company. I'm sorry my little still snapshots fall so fall short of the experience of watching cranes in flight. 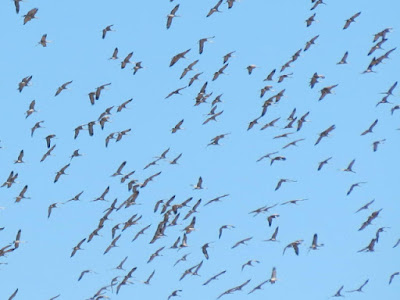 “WATCH FOR ANIMALS NEXT 21 MILES” reads a typical sign along Southwest roadways. “I do little else,” I commented to the Artist as we passed one such sign, and he laughed at the truth of my remark.  Always I am hoping to see one of the high desert’s larger mammals, perhaps the coyotes we hear at might, a herd of mule or white-tailed deer, or another family of javelina — this time when I’m ready with a camera, please! But the large animals are wary, and rightly so. One day I wanted to stop to inspect a road-killed deer to determine which species it was, but we were on a curve, with another car right behind us, and by the next morning the deer carcass was gone. A dead skunk, now — that can lie on the shoulder of the road for two weeks. And it has, too. Even scavengers are passing it by. “A dead skunk is a hard sell,” the Artist observed. 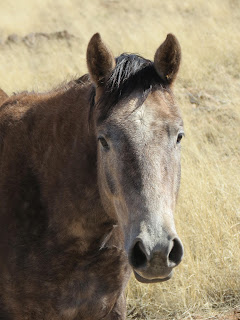 Of course, I am always scanning fenced enclosures for horses, and there are never enough horses to see and never a horse not worth closer inspection. In the least glamorous herd, there will always be at least one with a beautiful face. And now, having been reading a book on reining horses, we look at conformation with more specific points in mind. Would this horse be good at reining events? Does it exhibit the correct, symmetrical trapezoid form? Would we be able to tell?

The Artist was at the wheel on the day we were once again on our way to the Stockton Pass through the Pinaleno Mountains when I spotted a javelina ahead in the road. Luckily there were no other vehicles in sight in either direction. “Slow down, slow down!” Quick, the camera! Yes! Success! My day is made! 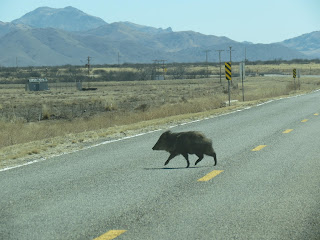 The javelina is locally called “wild pig,” or, more derisively, just “Pig!” Its Latin name is Tayassu tajacu, its proper English name collared peccary, and because it is largely nocturnal, it is more often heard at night than seen during the day. It has that in common with coyotes, though we are accustomed to coyotes around our northern Michigan home, and their sounds at night are nowhere near as nerve-wracking as that of a herd of marauding javelina. Javelina generally travel in groups, looking for trouble, as it were — breaking down fences, raiding gardens, getting into garbage, and generally annoying homeowners — and so this solitary soul near the Coronado National Forest was a mystery, but as it lost no time in hurrying across the road and down into heavy brush that camouflaged it very effectively, I wondered if perhaps its family members were not far away. Would you, driving by, have spotted the hidden javelina? I certainly would not have suspected its presence. And then one naturally wonders, how many animals are around us here all the time, in this “empty”-looking landscape, blending into the monochromatic winter scenery right before our unsuspecting eyes? 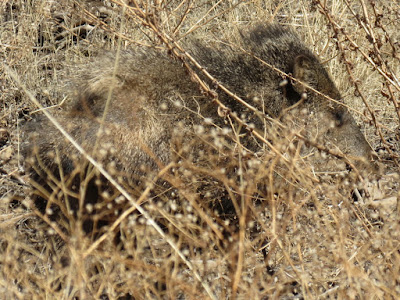 Wonderful pictures.
You are careful and passionate observer.
Thank you