Yet Another Bookman's Holiday

We are getting back to normal -- or at least establishing a "new normal" following the Artist's three-day hospitalization in Tucson due to a non-ST heart attack. [link] Since a friend visiting from Michigan, staying in nearby Willcox, is a big fan of indie bookstores and offered to do the driving, we made a little expedition over to Benson the other day to introduce him to bookstores we have discovered on the other side of Texas Canyon. Sadly, our very favorite Benson bookstore closed three years ago -- was in the process of closing in April of 2015 before we left Arizona for Michigan -- not because of business failure, I'm happy to report, but because the owner had put in her quarter-century of bookselling and decided it was time to retire. Even without that shop, however, our itinerary included several interesting book sites.

The first was Singing Wind Bookshop, unusual primarily for its location. Singing Wind is not in the town of Benson at all but two miles north of the expressway on Ocotillo Road and then down a long dirt driveway. It is housed on a ranch, and you can see exterior shots on my 2015 post. This time I photographed only the donkeys outdoors. The Artist loved them! (See above.) Aren't they sweet?

Indoors we were greeted by Missy, resident bookstore dog, eager to have herself immortalized in a portrait. 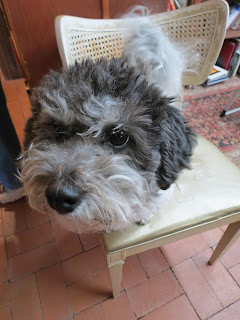 Then Peggy, in charge for the day, called the owner to give us "the tour," and Winn toured us to a fare-thee-well, shelf by shelf, through her excellent inventory featuring (but hardly limited to) books about the Southwest. Tom and I both made substantial purchases while the Artist went back outside to commune with the donkeys, and Tom was impressed with the selection and very glad we had made the trip to Singing Wind, all the more so since he found a favorite author whose books he usually has trouble finding.


From the ranch we went back into the town of Benson for a stop at the little bookstore run by the Friends of the Library. All three of us found treasures there -- books, magazines, music CDs -- more bags of books to crowd into Tom's car! 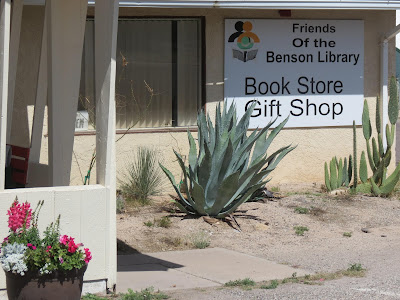 Then, rather than take time for lunch, we decided to push on to one more bookish destination, the Benedictine monastery on the San Pedro River south of the town of St. David. 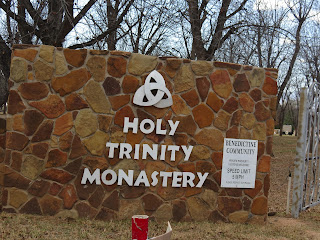 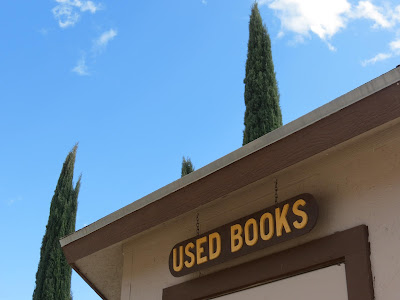 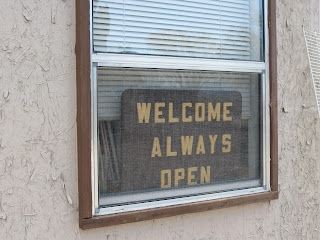 I wanted to photograph the bishop's house, also, because it is so gracious and lovely but was disappointed that the peacocks, although within hearing, were nowhere in sight. They had showed off, preening and strutting like runway models, feathers shining irridescent in the sun, on our previous visit -- the day I didn't have my camera with me. Now they remained hidden. How vexing! But of course we had come primarily for the bookstore, where once again I managed to find a few delightful items amid the donated books. Both bookstore and thrift shop, as well as the office and shop with new religious books, souvenirs, and local produce (mostly pecans and honey), are maintained by volunteers who come for a month at a time and live in their RVs back by the birding trail along the San Pedro River.

The three of us agreed unanimously to content ourselves with treats at the Old Benson Ice Cream Stop instead of traditional lunch, which made me happy, as I had been anticipating an Italian cream soda ever since we set out for Benson. 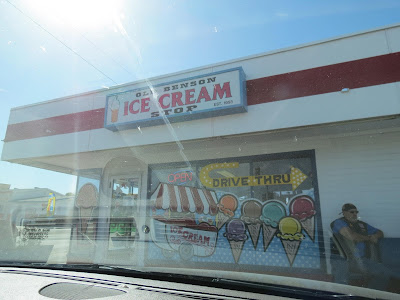 While I was inside waiting to order, another woman came in, apparently on her first visit and practically reeled when confronted with the huge menu board listing possibilities, exclaiming, "You could come here every day for a year and have something different every time!" As for me I'm working my way through all the available flavors of the Italian sodas. Last time hazelnut, this time raspberry, next visit who knows?

It was very windy all day, and when we came through Texas Canyon the dust was still in such an uproar on the Willcox Playa that Dos Cabezas was not visible at all, and it remained hidden to us all the way home. I tried to capture the effect of a dust storm with my camera but to so little effect that there's no point posting the results.

Here, on the other hand, are books I have bought recently. Four of those pictured (which ones, do you think?) were not from our Benson trip: one (used) was from the little Friends bookshop in Willcox, two (new) from a research station in the Chiricahua Mountains, and one (used) from a desert museum store. The remainder, my purchases from Thursday, totaled $60. That was spent at $50 Singing Wind and $5 at each of our other two stops. Can you guess which books came from where and which were most expensive? 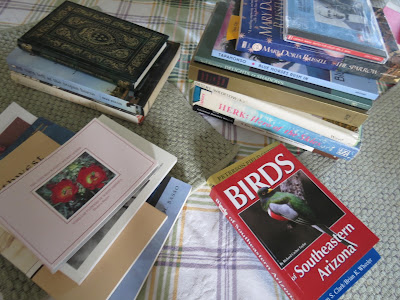 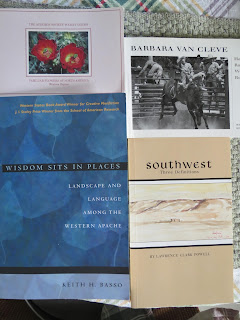 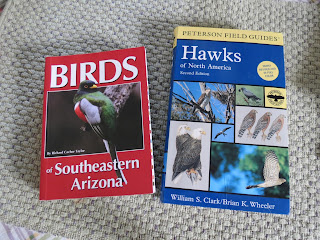 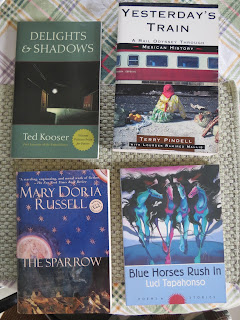 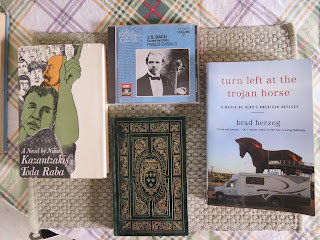 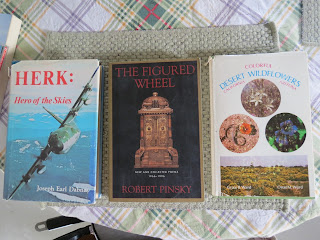 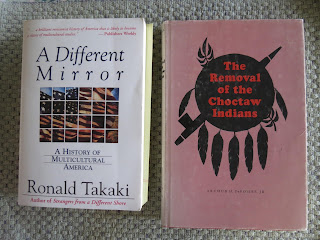 Bookseller's note: I do not begrudge paying full price for new books or a reasonable price for used books in an indie bookstore. Bookstore owners have invested time as well as money in their businesses and are working to make a living and deserve to be paid for what they do. I am not without prejudice in these matters, of course, as you know, because, as an indie bookstore owner myself, I understand from firsthand experience that a bookstore owner cannot make expenses, much less make a living, by selling books at the same prices as volunteer-staffed library bookstores, but I bring the matter up today because at the Friends bookstore in Benson there was no way to help overhearing a man (with a very loud voice) complaining about the wonderful store with the fabulous inventory of used books that used to be our favorite Benson stop. His complaint was that prices in the bookstore were higher than yard sale prices.

All of us could, I suppose, survive without bookstores. We could do our book-buying online (searching out specific titles) and at yard sales and garage sales (taking potluck). But I have to say that if I am ever able to retire, I plan to continue patronizing indie bookstores wherever I find them, as I already do, despite having my own. I love the volunteer-run library bookstores and thrift shops, but I also really appreciate well-curated bookstores, run people who know their stock, love their books, and have enough faith in themselves and what they sell to maintain open public, "bricks & mortar" shops. And I'm (really) not saying this to toot my own horn but to salute my colleagues because I know the sacrifices you make on a daily basis. Thank you, people like Winn at Singing Wind, for providing me with bookman's holidays!

Reader's note: Then just last night (in the middle of the night, actually, during a sleepless hour) I finished my reading of Ronald Takaki's A Different Mirror: A History of Multicultural America (1993). Reading it was often, I'll be honest, an emotionally painful experience. Nevertheless, it is a book I highly recommend, and I guarantee that if you read it through to the last page, you will never again be tempted to view American history in simplistic terms. Thank you, Ron Takaki, for this important work!

I have now begun Edith Wharton's Age of Innocence, and before the Artist and I go to sleep at night, I read aloud a chapter of Brad Herzog's Turn Left at the Trojan Horse, so far much more than just another travel memoir. 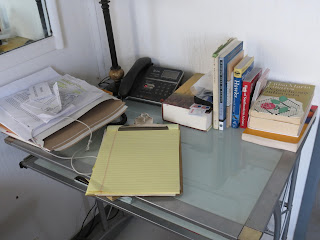 Another great post.
Keep them coming.
Glad the artist is doing well.
I'm into Age of Innocence as well.
An anthropological at NY high society.

Steve, I think often of our reading circle and miss you guys! As for AoI, just when I think Edith Wharton is treading old ground, I come to a fabulously insightful sentence and read on with renewed eagerness.