Who Gets to Name Places? 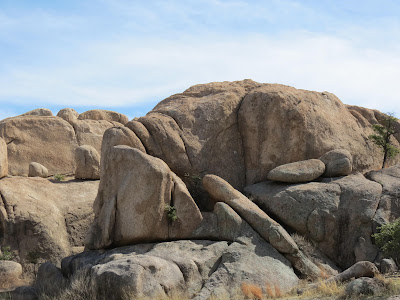 Sunday was another cold, windy, chilly day, too cold to sit and drink coffee on the porch at Beverly's and watch trains go by. Go to La Unica for lunch? No, esta cerrada los domingos. (Sorry about those missing accents!) Another nearby wonder our friend Joe had never visited, however, was the Amerind Foundation Museum, over the other side of Texas Canyon, and yes, the museum was open until 4 p.m., so off we set. 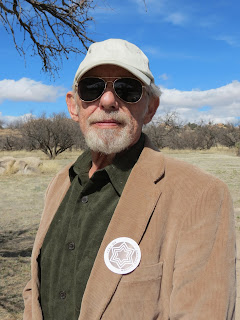 I had already been twice to the museum and was more in need of a little quiet reading time than another exhibit walk-around, so I waited in Joe's truck, luxuriating in warm sun through the windows, while he and the Artist took in the exhibits. One of the books I bought from Winn the other day on the Benson book-buying excursion was Wisdom Sits in Places: Landscape and Language Among the Western Apache, by Keith H. Basso, and Chiricahua on Saturday and Texas Canyon on Sunday were the perfect backdrop for Basso's book, as his purpose in these essays -- as in the research preceding their writing -- was to understand the significance of place-names in Apache life and thought. For too long, Basso writes, linguists have considered place-names exclusively as referrents, regarding them within the larger range of proper nouns "as referential vehicles whose only purpose is to denote...." He notes the irony of this position,

...for place-names are arguably among the most highly charged and richly evocative of all linguistic symbols. Because of their inseparable connection to specific localities, place-names may be used to summon forth an enormous range of mental and emotional associations--associations of time and space, of history and events, of persons and social activities, of oneself and stages in one's life. And in their capacity to evoke, in their compact power to muster and consolidate so much of what a landscape may be taken to represent as both personal and cultural terms, place-names acquire a functional value that easily matches their utility as terms of reference.

Because of the evocative power of place-names and their freight of associations, they also make available rich metaphorical meanings that native speakers use in story-telling. It felt good to sit quietly and soak in warm sun and rich ideas. 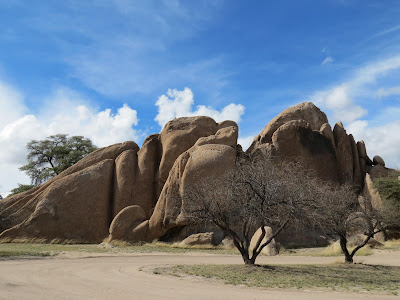 When my expedition companions returned from their museum tour, the Artist directed our friend to drive to the picnic grounds, where amidst seemingly gravity-defying boulders (many, I have discovered from close examination, have vestigial mushroom-like stems connecting them to base rocks) the three of us deployed cameras like the tourists we were. 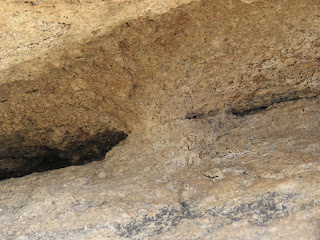 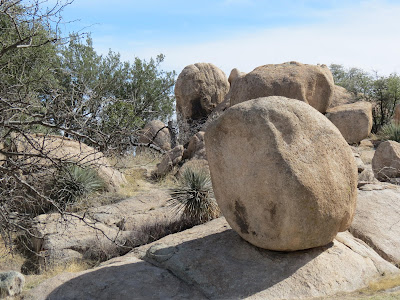 The edge of Texas Canyon encompassing the Amerind and lining Dragoon Road is certainly spectacular, and Joe was especially entranced, seeing it up close for the first time, but I couldn't help relating the place to my reading and thus thinking that surely it once had an Apache name, a name that would have been very important to the people who knew and used it. The entirety of Texas Canyon would have had such a name, and the smaller area we were photographing no doubt -- the feeling was very strong; I was sure of it -- had its own specific name, a name would hold for its people a history of events to which we visiting Anglos are completely blind. 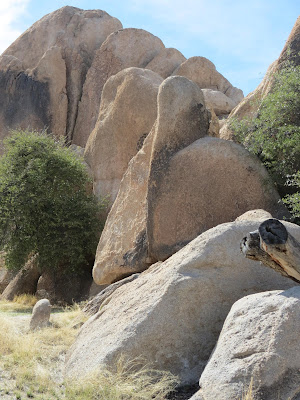 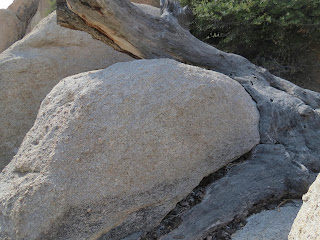 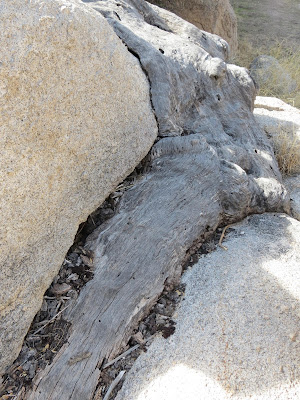 We can read all we want about the geology of the area, how the rocks came to be, as they are, but we have no personal connection to the place, no memories of unwritten local events, no knowledge of the stories that would make the rocks live for those knowing the stories. We are only strangers passing through a place named on our paper maps. 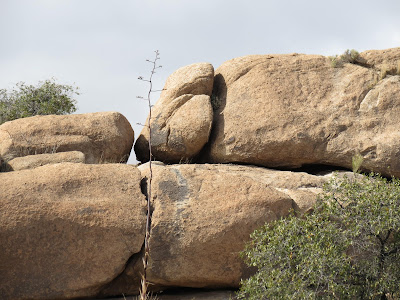 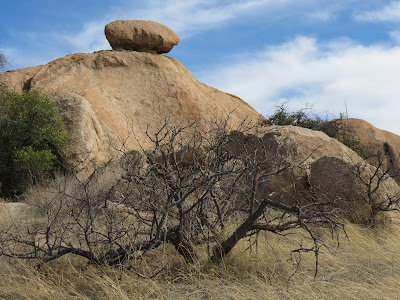 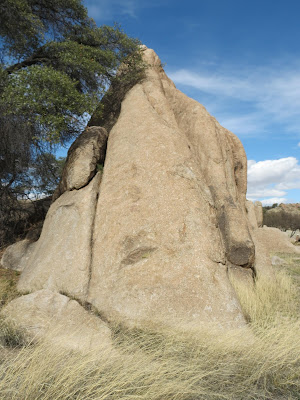 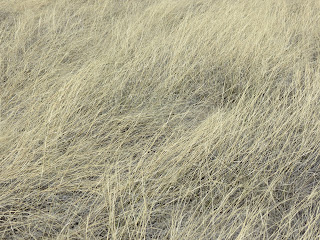 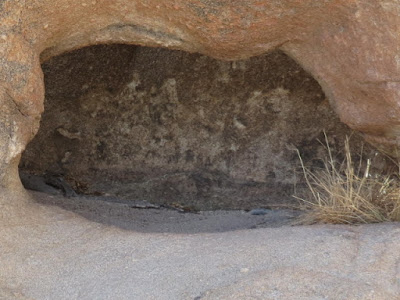 Back on the road, though, from our passage through Texas Canyon on the expressway, I could see Dos Cabezas in the distance, and I thought, those twin peaks are my mountains. I look out on them every morning. They are the landmark from which I orient, whatever direction we travel out from our winter cabin to go elsewhere. Those mountains have become part of my life, whether hidden in clouds or mist, standing out bright in the first light of morning, or darkening as night comes on. I smiled, seeing Dos Cabezas -- and again, a little farther down the road, when Willcox appeared, "my little cow town," as I call Willcox, feeling a fondness for an endless number of ordinary spots and corners in the town, places now woven into my life history and meaningful to me, even from my ephemeral position on the far periphery of local culture.

Most of the town names around here are not awe-inspiring or evocative of very much. Willcox, Benson, Pearce, and Safford are named for whitemen who were at one time big deals but are hardly household names any more. Texas Canyon is called that because some a family from Texas got no closer than this to their original destination, the West Coast. The name Cochise County, when you get right down to it, is only the name of a person — albeit an Apache — not the kind of specific, descriptive place-name Apaches themselves would have used.

Dos Cabezas, the name of a small mountain range, its twin peaks, and also the ghost town nestled on the south side of those peaks, comes nearer the spirit of Apache place-naming. As one of Basso's informants said of her home mountain: "'Elsewhere, hearing that mountain's name, I see it. Its name is like a picture.'" That is certainly true of Dos Cabezas. Its name is like a picture, and whenever I see or hear the name, I see the mountains, their identifying twin peaks, and the ghost town below, and my impulse is to pronounce the name aloud.

In Dos Cabezas, our little poblado del invierno, I feel like more than just a stranger passing through. However temporary our stay, I feel at home here. 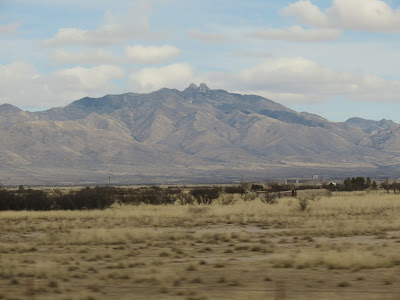