And Yet Another Place of Ghosts 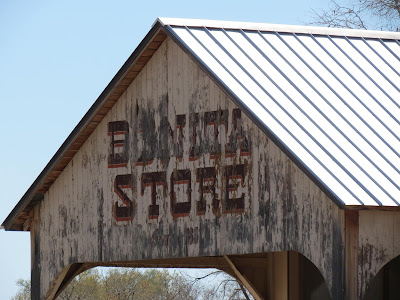 [This is another one that's been "in the can" for a while. I'll have something new soon.]

Dos Cabezas and Pearce are not the only former townsites in southeast Arizona now gone sleepy. Much, much sleepier is a dusty T intersection on the back roads from Willcox, in Cochise County, to Safford in Graham County to the north. Astonishingly, there is a modern elementary school at Bonita (which I always want to call “Bonita Junction), but little else other than cows and wildlife.

Coming down from the mountains, Bonita Creek cuts across the east-west road and takes a shortcut southwest to cross the north-south road south of the intersection and school. The path of the creek is easy to follow with the eye. Like the course of the San Pedro River over on the other side of the Dragoon Mountains, the creekbed here, too, is lined with cottonwoods, and now, as they begin to come into leaf, their soft grey-green crowns winding across the land tell where water flows. 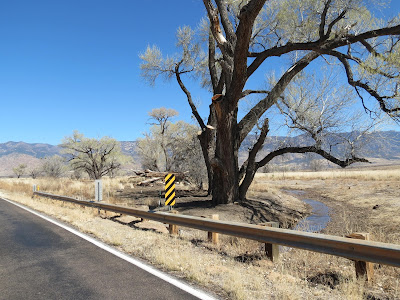 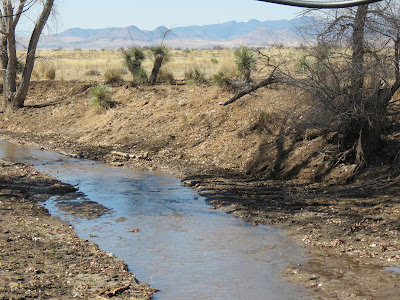 No matter how many times we pass this way, I am fascinated by the old store at Bonita, the only remaining once-commercial establishment of the former town. Other fans of the noir Western “Red Rock West” may recognize the building, but it isn’t a cameo appearance in a film that stops me to look again and again at the old store. (We first came this way before I had ever seen the Nicholas Cage movie.) The building itself, with its straight, true lines and faded paint, has a presence and obviously holds innumerable stories and secrets.

Arizona Place Names, by Will C. Barnes (and revised and enlarged by Byrd H. Granger), gives a hint of what some of Bonita’s secrets might involve.

When Fort Grant was in its heyday Bonita was a town just outside the military reservation where the soldiers poured in every payday…. There were then about one thousand people living in Bonita….


Payday for the soldiers occurred three times a year. Approximately one thousand soldiers descended on the town. Added to this were the girls who flocked in from Willcox. The eight or ten saloons did a rush business, as did the girls.


Today Bonita is a quiet and sleep spot.

Indeed it is! Where would the “eight or ten saloons” have stood? Where were the houses for the 1,000 inhabitants, and how could over 2,000 people have made this place “roar,” as the author says they did three times a year? It truly boggles the mind.

I position my camera to shoot through the chainlink fence (keeping nosy parkers like me from getting too close to the old building) and zoom in, hoping to investigate the interior, but all I can see are reflections on the store windows of the empty land behind me. 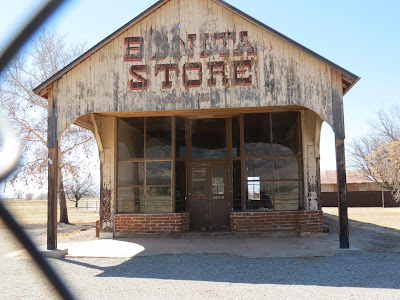 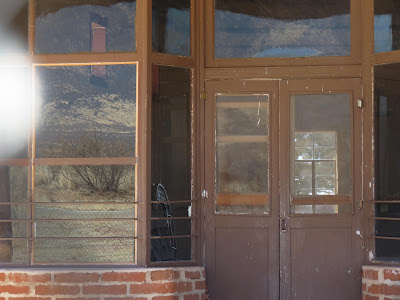 How long has the store at Bonita stood closed to the public? What was sold there back in Bonita’s “heyday”? In less distant years, what children made this little foot-powered merry-go-round spin? 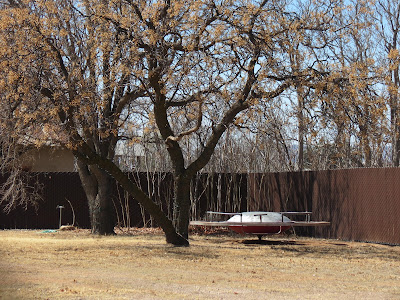 We sigh and turn out sights toward the mountains, anticipating our climb to the pass and perhaps a stop among junipers and oaks along the way, and as we cross Bonita Creek once more, we muse about the lives of those who settled here (post office established 1884), undoubtedly attracted by the running water that still, when flowing, helps supply the town of Safford. 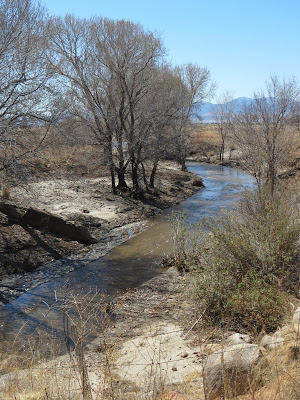 I love seeing the photos and imagining what life must have been like in the early 1900's.

I have tried to imagine, Deborah, but it's difficult!

I always wonder about the people that built their dreams in a place that no longer exists. I think about them when I see abandoned farmhouses and old stores like this. I wonder where they went when the place closed down and if they had new dreams.

Thanks, Steve. I see that I have used "yet another" on two post titles in a row, obviously reflecting the fact that we are retracing a lot of previous adventures this time around. Hmmm.