Don't Go to Bisbee on Monday! 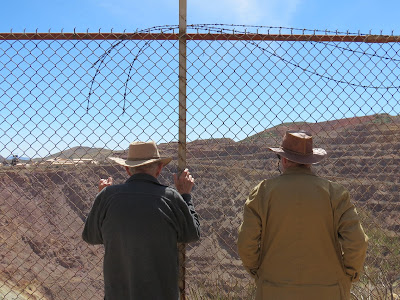 I love this photo of the Artist clinging to the chainlink fence next to his friend as the two of them peer down into the open mine pit. Bisbee is not like anywhere else in Cochise County. Some aspects of it -- the galleries and new restaurants and visiting tourists -- are like Jerome, Arizona, but Jerome (up north of Phoenix) doesn't have a huge open pit like this, so maybe Bisbee is not like anywhere else at all. We made the trip there on Monday of last week. 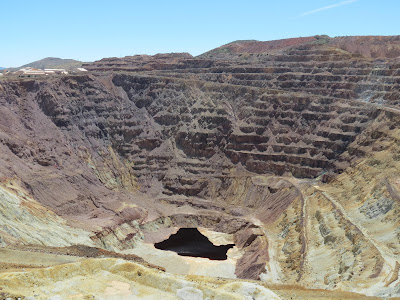 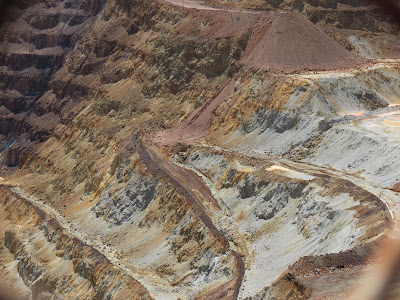 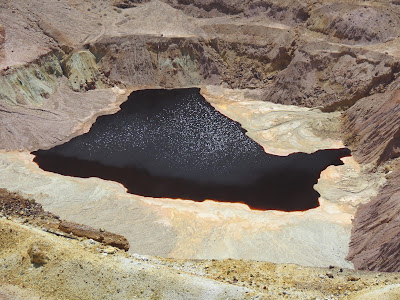 I'm not nuts about the scary, man-made hole in the ground, but the colors of the exposed rock please me. They remind me of the soft and varied colors of cows. 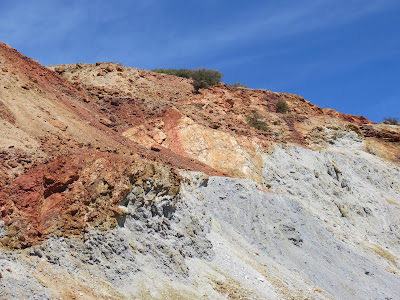 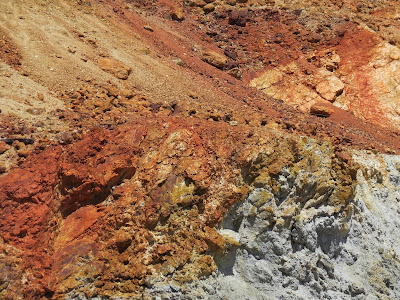 Colors and materials of Bisbee's old historic buildings blend harmoniously with the surrounding rock. Some buildings are imposing, others modest. 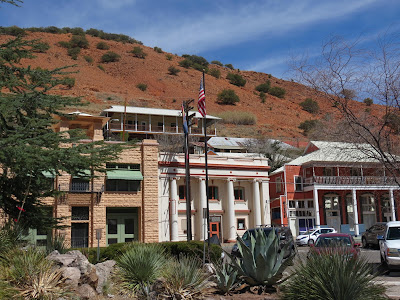 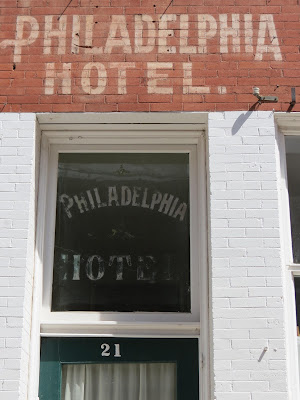 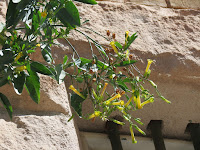 But smaller details also catch the eye, too. I was admiring some of the season's first flowers (it's almost spring!) with a woman from Iowa when a local man passing by stopped to tell us it was Indian tobacco, a member of the nightshade family. I also noticed chinaberry trees all over Bisbee neighborhoods. Isn't that a lovely name, chinaberry? 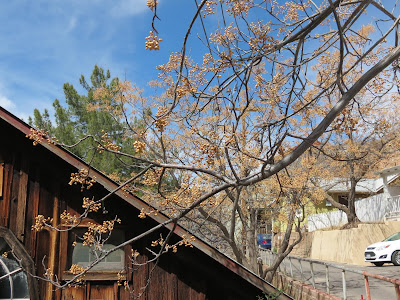 Our visiting friend eagerly posed in the doorway of the brightly painted remains of a former building, a site I remembered from visiting Bisbee three years earlier, though if I compare these photos with my old ones I would probably see that the painting itself has changed in the intervening time. 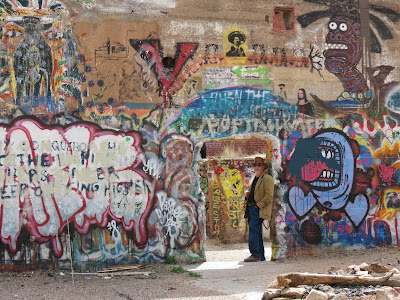 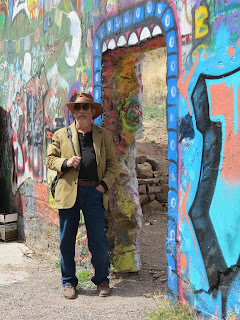 There are distinctive features everywhere one looks in Bisbee -- walls hung with art or turned into art, a door decorated with bottlecaps, a stone wall with wooden doors that have pickaxes for handles. While I was gazing at the wall hung with paintings, the man who had identified the Indian tobacco appeared with three canvases under his arm. "The botanist!" I exclaimed, and he smiled and said he wasn't really but had learned a lot from friends. I wanted to photograph him from the back as he proceeded up the stone steps but could not get my camera on and focused and the subject framed in time. The picture I saw with my eye, however, is still in my mind. If you use your imagination, maybe you can see him there, too. 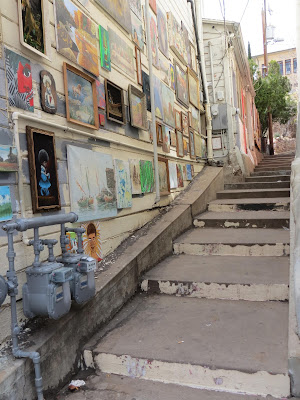 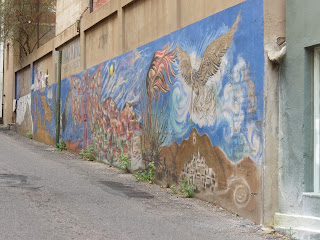 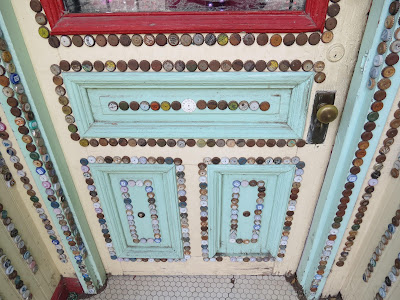 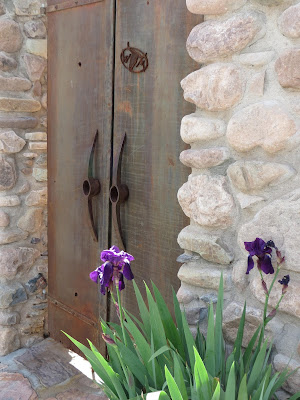 Bisbee engages other senses besides vision. Wafting barbecue smoke drifted over a wall to tease us with its tantalizing aroma as we passed by ... 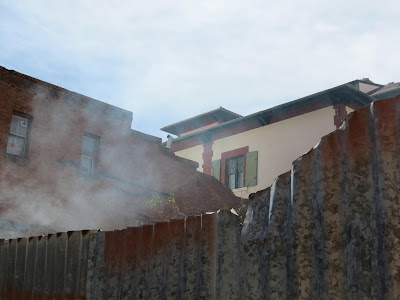 ... while smoothly polished examples of different rocks and minerals outside the historical museum invited stroking. 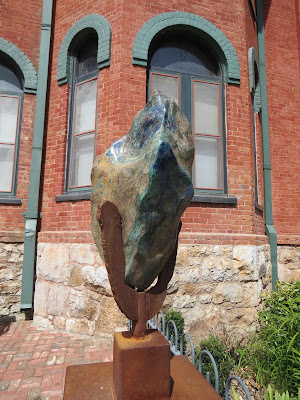 Had we brought checkers or chessmen, we could have sat down for a game, but the Artist was intent on a visit to the Copper Queen Hotel, where the son of an old friend can sometimes be found in his lobby jewelry shop. No, not that day. 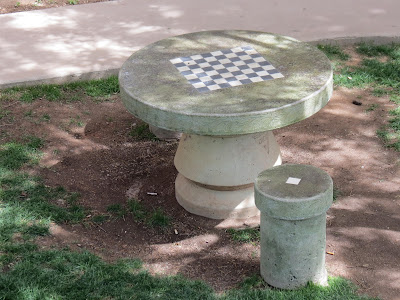 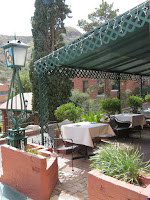 Many businesses, we had discovered, are closed on Mondays in Bisbee -- as is also true in Benson and Willcox, which was one reason we had decided to make Bisbee our destination that day. The bar side of the porch of the Copper Queen was open, though, and we were happy to find a table in the fresh air and order drinks and "starters" (which made our light lunch that day). Following a chilly, windy weekend, sitting outdoors in warm air, without jackets, enjoying cold drinks felt like heaven. 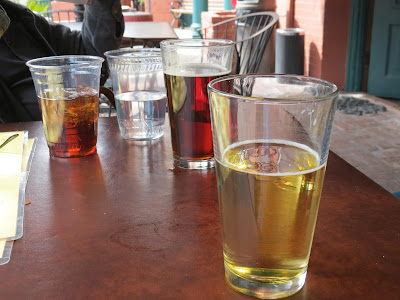 Over on a busier street, we found a few shops and galleries open and even managed to get in a little shopping. Well, mostly looking. I looked at boots and looked at scarves but in the end bought only -- what else? -- a book! St. Patrick's Battalion, by James Alexander Thom, is a historical novel that takes its story from an incident of the Mexican-American War of 1846, when an Irish-American soldier and hundreds of his comrades defected to the Mexican side of the conflict. As Catholics coming from poor peasant stock who had seen their own native land invaded and seized by the English, their sympathy was with the Mexicans. I've only heard tiny bits of this part of American history and look forward to reading the novel.

One good thing about being in a tourist town on a day when many businesses are closed is that the streets are not as crowded as they would be otherwise, so I would not say absolutely that you should not go to Bisbee on a Monday, and, after all, it worked out for us. We were not able to have bowls of pho at the Vietnamese restaurant, but cups of beer-and-bean chili at the CQ filled in nicely. So, sure, go to Bisbee on a Monday! Just know ahead of time that you will not have the full selection of restaurants and shops.

I'll close today's post with a store sign that caught my eye and made me smile. Customers of Dog Ears Books (and readers of Walter Mosley) will instantly catch the double reference. 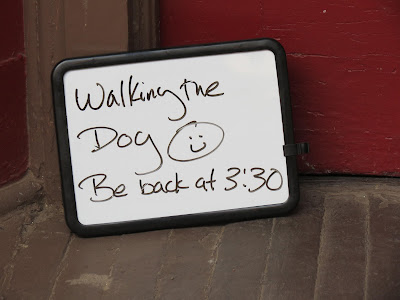 Everyone needs some "Walking the Dog" time.

Miss Sadie can relate. We, too, enjoy "Walking the Dog" time, even on icy trails.

As always I enjoyed this Bisbee post. I am chasing myself just now or I'd find more and better things to say. Soon, soon.

Just wanted you to know that I have deleted my FB account altogether, but hope to revive TLV. Shifting gears is always such a challenge for me. Anyway, you know how to get to me, in all ways, always!

All dogs and their human companions vote for dog walks! As for Torch Lake Views, Gerry, I know Dawn wants to see it reborn as much as I do!