The Expected, the Unexpected, and the Big Surprise

Yes, today is the first of March, and we did have a full moon last night, and — still moving backward in time — yesterday was a day of snow here in southeastern Arizona, the day before a quiet one of R&R (reading and relaxing) in the ghost town, but I want to begin all the way back with Monday, because that is when we at last came to the banks of a flowing river. 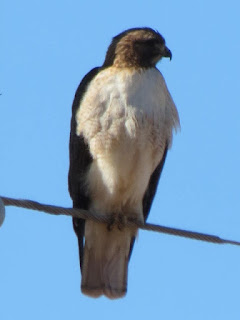 The first day’s stop along the road Monday, however, was for this hawk. We look for him every day, and this time he sat still for the camera, so that I at last could identify him as a red-tailed hawk, as common in Arizona (if not more so) than it is in Michigan. On average, one red-tailed hawk can be found every four miles of highway in this part of the country. Not a rare sighting, in other words. But I don’t mind identifying common birds, especially one with as many different and perplexing color morphs as occur in this species, and I’m calling this a Fuertes’s morph until someone tells me I’ve got it wrong: light buff breast with barely visible horizontal bar markings. Lovely! On our way back later in the day, he was at a meaty afternoon meal, standing on the meal, in fact, and tearing strips of muscle upward with his short, curved beak.

We had morning coffee in town (cabin coffee comes earlier in the morning) at a charming Mexican restaurant, La Unica, where we went for my birthday lunch three years ago. La Unica features the best tortilla chips I’ve had in my entire life, made in-house and available for sale by the bag in the little store area up front, and on this last Monday of February, a big bean and cheese burro fueled me for another day of adventure.

We’d been to Benson several times already this winter, where seeing what should be the Rio San Pedro as a wide, dusty, dry wash hurt my Michigan heart each time. Monday’s adventure, however, took us to a very different stretch of the river, where to our great joy we found flowing water at last. As you can see, the river between Tombstone and Sierra Vista, when in full flow, would boast two or three different streams. While most of the exposed bed was dry on Monday, one held streaming water, sparkling in the sun. Water! Life itself! 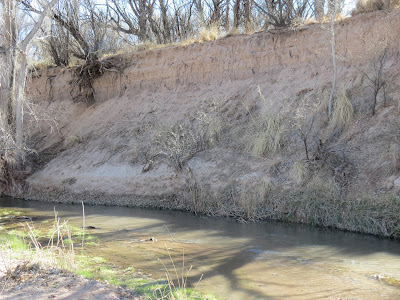 A section of deep-cut bank shows the power the river can have and has had many times in the past, probably after summer thunderstorms, although for now its flow is gentle and quiet, with little erosionary force. There was still the mystery of the dry bed at Benson — geographically north but, I’m pretty sure, downstream, since the San Pedro is a tributary of the Gila. Is all the water being drawn off for homes and farms? A couple days later another thought came to me, as I remembered the little no-name creek by our Michigan farmhouse and how in one extremely dry summer the flowing water ducked underground for a long stretch, reappearing farther along its course. Perhaps that’s what the San Pedro is doing. I do hope so.

Two days later, on Wednesday, we awoke to the scene at the top of this post. Actually, we woke earlier, at first dim morning light, to heavy fog, and after a while the snow began, falling steadily and more and more steadily for a couple of hours. Our little world was completely transformed, and it was as if we had been transported to another world. 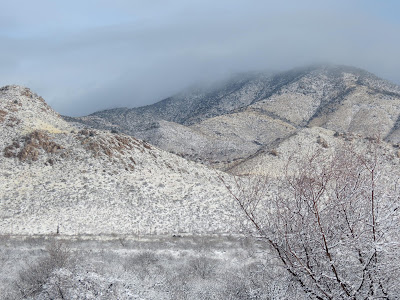 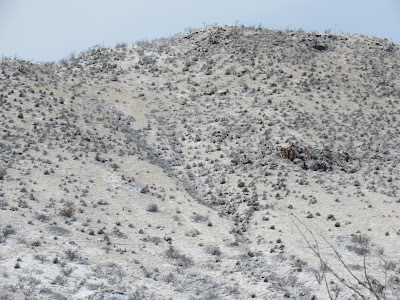 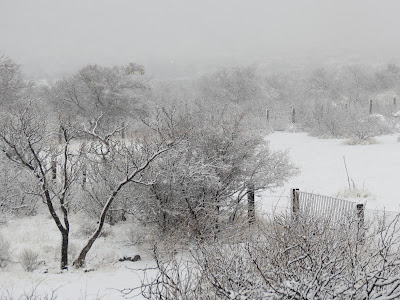 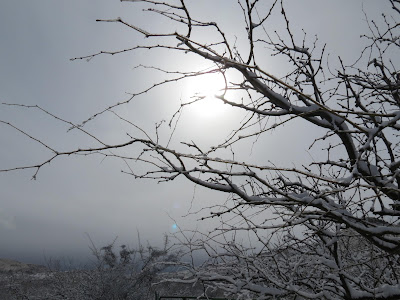 Expecting the snow to vanish by noon, we set out for our daily Willcox errands, marveling at how different our familiar mountains looked with snow. Willcox greeted us with hail and rain, but that let up after a while, and we resolved on another drive over to Benson, this time to explore further down the river corridor. On the expressway, we encountered driving snow. Not only the Chiricahuas and Pinalenos were snow-capped on Wednesday, but the Dos Cabezas and Dragoons, also, and the snow extended far down their slopes. As it turned out, the day was so cold that those slopes remained snowy late into the afternoon, and there was still a bit of snow on the ground behind the cabin, too, when we got home again.

There were many more opportunities to employ a camera throughout the day, including our visit to a Benedictine monastery outside the town of St. David, monastery grounds guarded by a large flock of strutting peacocks — but unfortunately both camera batteries, mine and the Artist’s, ran out of power. Bad luck! We will have to go back another day.

And then February, our first month in the ghost town, came to an end, with a full moon and clear, glowing sky promising sun the following day. 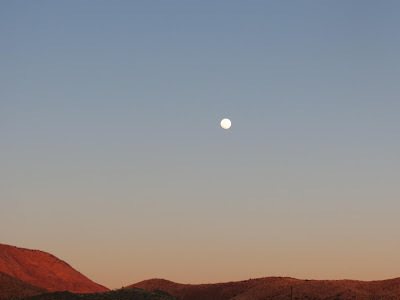 What a great post! So enjoy being brought along for your beautifully observed adventures!

Barbara, I enjoy having you traveling along with us!

LOVE that there was snow in Arizona, there's been snow in Michigan too, while we were gone. (Of course.) Today here in AL it's cold...freezing in fact. My blood is thinning out already.

The moon sure was pretty at the end of the month wasn't it!