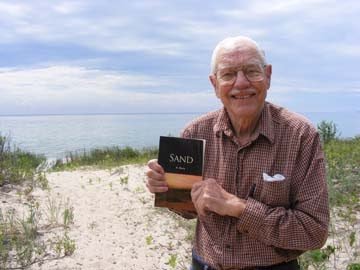 For years—he has lived here fulltime since 1978--no one around Northport knew that Al Bona was a poet; his neighbors and other local residents knew him only as a retired banker. (He was actually retired from the presidency of a small family-owned savings and loan association in Illinois, and that’s a whole story in itself, but I’ll leave it for him to tell another time.) But when he and my husband, artist David Grath, became friends, Al gradually began to share with David and me a few of his poems, and both of us were impressed by the originality of his voice and the lyrical clarity of his thoughts. Encouraged by our response, Bona let us into more and more of this very important but previously hidden part of his life.

Finally, we decided to “expose” him publicly.

In 1999 David had an art gallery at 102 Nagonaba (later my bookstore site, currently Sally Coohon’s Dolls and More). David and I invited friends, borrowed folding chairs, fixed refreshments and introduced Al Bona and his poetry to the assembled crowd. After that, for Al, there was no turning back. Submitting poems to the Dunes Review literary magazine came next, and in December 2002 Bona’s “Prince, Let Go That Foolishness” was published, with subsequent issues of the Dunes Review carrying more of the Northport writer’s work.

Finally Bruce Balas of Omena, a.k.a. Dog Ears Books bookstore angel, thought Al’s poems should be published in book form and pursued the possibility with Dan Stewart of Omena, who designs and publishes books under the name The Old Scott Farm. Together Al and David chose one of David’s paintings for the cover of the book. And now at last Al Bona’s inaugural volume, Sand, is being offered to the public of Leelanau and beyond. “As it gets closer and closer to publication,” Al said recently, “I’m starting to get excited.”

David and I are excited, of course, but the excitement has extended beyond the borders of Leelanau County. Here, in part, is what some other outstanding poets of northern Michigan have to say of Bona’s poetry:

"Al Bona’s poems are born in the regions of history, politics, philosophy and war, but come to fruition in the plain country of human frailty and hard questions. From Catullus to Ginsburg, he is fearless in subject matter, practiced in compassion, sharp of wit.”
– Anne-Marie Oomen, Un-Coded Woman and American Map

“On subjects as diverse as Eastern and Western classics, literary greats and political figures, aging ... in war zones and pastoral places, Bona is the humane reporter. He’s the witness determined to leave an honest record.... These poems considered together come across as benedictory blessings notable for a lack of self-pity.”
– Todd Mercer, Box of Echoes

“Al Bona’s poems record a life of travel, feeling, books, military service, good food, friends and a certain ruddy political outlook. In much the same way he studies the prairie crab apple with its beautiful ordinariness, he has taken all of this living into his sand roughened hands, turned it over, and found a kind of sweet-sour essence.”
– Holly Wren Spaulding, The Grass Impossibly

Uh-oh. David and I can't take all the credit, can we? We have to share it with Bruce Balas, Dan Stewart, Anne-Marie Oomen, Todd Mercer, Holly Wren Spaulding, all the folks at Dunes Review and everyone else who has recognized Al Bona's talent as a poet. Oh, well. Okay. Bona Fan Club United!

The launch party for Sand will take place at Dog Ears Books,106 Waukazoo Street in Northport, on Friday, July 16, from 4-6 p.m. Come one, come all! This is something to celebrate! And you will not want to miss the opportunity to buy Al's book and have it signed by the poet himself. 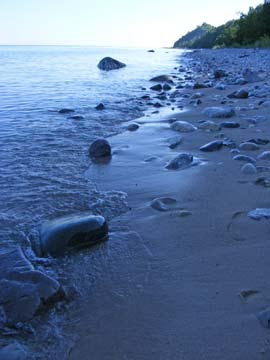 Congratulations to Al Bona. I'll be missing the launch due to my mother's art opening at The Center Gallery but I wish you all the best (and if you don't mind, perhaps that errant punctuation at the bottom of my blurb could be corrected?)

Thanks for the good wishes, Holly. I have corrected the errant punctuation, also. (How did that happen?) We wish your mother a lovely opening in Glen Arbor. All the arts are well, it seems, in Leelanau County.

I am willing to bet that you had a great event this afternoon. The story of the blooming of a poet was very nice to read.

That's one of my many jobs for today, Gerry--posting pictures of yesterday's event. Yes, it was lovely. And the next one (not a launch, so not as elaborate) is this coming Thursday!!!

Isn't it? And here you thought you knew him, right?