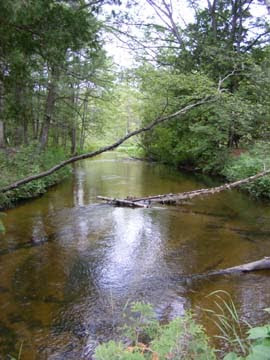 Sometimes I amaze myself. I actually manage to keep reading books during the incredibly busy, full summer days! The effort pays off, too, and this quiet, drizzly, sweet Monday after the hot, hectic holiday weekend seems just the time to slow down and tell you about one of my latest finds.

It took Ed Winters some time to remember how to walk on a beach. His feet sank, and for a while it was more of a stumbling gait than a walk. He had to stop thinking and concentrate on his feet. He moved closer to the water where the sand was wet, smooth and firm. He walked, moving up and then back with the rhythm of the waves. The small waves hushed against the shore. The sky was overcast, but it wasn’t going to rain. At least a mile out, a car ferry made a small shadow on the surface. Ed stopped, as though he could keep a step ahead of the heavy feelings, like some stranger walking close behind him. He looked for beach glass, but found none.

Threatened Species is the first work I have read by Midland author Jeff Vande Zande, whose knowledge of and love for Michigan roads and streams pervade the pages of this quiet book, and I’m glad to have been led to discovering him. (Thank you so much, Valerie!) Vande Zande’s characters are ordinary people. They have pain and confusion in their lives, but the author’s language is never overwrought, never overreaches. My feeling as a Michigan reader is that of encountering on these pages people I know in places I love.

“Threatened Species,” the 110-page novella that is also the book’s title story, tells of a camping trip that turns into a road trip. The travelers are a father and his pre-adolescent son, and the trip begins in Michigan’s Upper Peninsula, but I don’t want to give away too much of the story by recounting the full itinerary. I’ll tell you that it is trout season, so early spring, and that, because in August the boy will be moving to Paris, France, with his mother and stepfather, Ed Winters feels this will be his last chance for any extended time with his son.

His son. In the guest room, separated from him, he imagined what it would be like to have him an ocean away. Holidays would be hell, but even the day-to-day stuff would get to him. ...Ed raised a fist in the air and then swung it down forcefully into the mattress. Alone. He would soon be absolutely alone.

Like other fathers and sons, especially in northern Michigan, these two have been bound by fishing as much as by blood, and it is the promise of a legendary fish that draws them farther and farther from home. We as readers experience anxiety along the way over the fate of this often-sad pair, as decisions made on this trip could influence the rest of their lives, and fear of loss does not always make for good decision-making.

The chapters narrating Ed’s point of view are written in the third person, those from Danny’s in the first. When a second first-person narrator enters much later in the story, the reader feels a shock, but that was a strong decision on the part of the author. It all works and would not have worked the same way had he decided differently. There is a competent sureness at work here.

The five short stories that fill out the remainder of the book reaffirm the impression one receives from the novella, that of Vande Zande’s strong story-telling skill. In “Haunted” and “Breakdown” his protagonists are women, and their points of view as true as those of their male counterparts. This author accurately sketches human situations in much the same way a visual artist sketches human forms. Truth is complex, and truth is simple. Vande Zande catches the paradox artfully.

I’m trying to put together a visit to Northport for Jeff. If it comes together, we’re all in for a treat. Meanwhile, we have his book, and that’s the main event, after all.
Posted by P. J. Grath at 5:08 AM

I believe I must read some of Jeff Vande Zande's books, even if they have nothing to do with the Civil War.

Gerry, it won't take you weeks to read this book, and I think you will really be glad you took the time away from battles. I've been thinking a lot about young Michigan fiction writers and how so many of them don't get the national attention they deserve. Jeff is one of the deserving, Bonnie Jo Campbell another, and there are more, of course.

The stream in the photograph is Shalda Creek, which enters Lake Michigan through Sleeping Bear National Lakeshore. It's a little beauty. I've also been remembering today the little rivers David and I used to float and paddle down in southwestern Michigan, notably the Paw Paw and the Little Rabbit. It seems like only yesterday!