The Life I Have: Stimulating Conversation and Reading 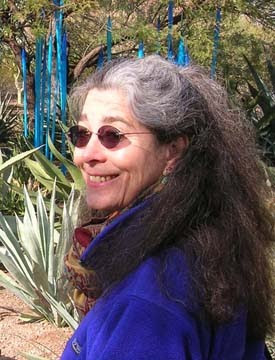 "An ounce of practice, worth a pound of theory, takes a ton of patience." - Stephanie Mills, On Gandhi's Path: Bob Swann's Work for Peace and Community Economics

Stephanie Mills, Sunday's guest author at Dog Ears Books, had to provide me with this lovely picture of herself, taken at the Desert Botanical Garden in Phoenix, AZ (which was at the time hosting and exhibit of Dale Chihuly's glass art--see background). I had to ask her for a photo because in the midst of all the intriguing conversation on Sunday afternoon I forgot to pick up my camera at all. I'd already been kicking myself a few days before for never having anyone take a picture of me with my visiting authors, and beyond that, I had wanted to ask Stephanie if I could do some portrait shots of her, more than the usual, casual, candid snapshots I usually take (when I remember to do so) at book signings, but somehow--oh, well, no use crying over spilt milk. The important thing is that she was there at the bookstore, holding us all spellbound.

It was rather a reunion of 1960s survivors (not all made it through the decade), with each of us coming from a different experience of the Sixties. Stephanie Mills, ever since her graduation from college, has led a life of commitment to ecology and the environment. Bob Swann, the subject of her latest book, also led a life of commitment. His passions were peace, Civil Rights, intentional communities and local economies; in every instance, what he strove to do in his life was to develop and hand on tools for peaceful, sustainable, small group independence.

Sometimes I imagine a life I might have lived instead of the one I did live. Sometimes the imagined life is on a working farm. At other times I am a world traveler. Often in my alternative, imagined life I took the path of music. There are others, too. For each imagined life, I can look back to see a small step or two taken in that direction--my son in an alternative school, our move to the country, my brief career as a blues singer--and then a turning from the path, a different path chosen. What, I wonder, happened to those who stayed on paths I traveled only for a short while? Some of the answers are in this book. There are a lot of memories here for me, too. There was time spent out on Stewart Lake in Barry County, where Circle Pines Camp brought Bob Swann in his own time. I too remember the political protests of the Sixties, the back-to-the-land movement of the Seventies, the Michigan Land Trust and School for Homesteading developed by an interdisciplinary group of professors at Western Michigan University. Where are they all now? It makes me happy to see local food production coming again to the fore of public attention, perhaps stronger than ever.

In highly urbanized, industrialized North America, access to arable land is not so clearly understood as being fundamental to household and community subsistence and social order as it is in peasant countries. This misconception may change, however, as economic decline and the end of cheap oil mandate the relocalization of food production and much else besides.

My beans are coming in. Our local farm market has come into its own this summer in Northport. There may yet be chickens in my future. For the time being, however, I am fortunate to be living a life that includes meeting and talking with fascinating writers and readers.
Posted by P. J. Grath at 4:43 PM

Speaking of Dale Chihuly exhibits, Marjorie and I thoroughly enjoyed the one that's on right now (until Sept. 30) at the Frederik Meijer Gardens in Grand Rapids.

Thanks for the tip, Walt. I probably won't be able to get that far from Northport before Sept. 30, but I'll tell others about the show. Only time a friend and I tried to go to Meijer Gardens was on a Sunday morning, and we were too early, but I've heard wonderful things about it over the years.

I have also heard that the exhibit at the Meijer Gardens is exceptional. I hope to go, and of course if I do, I'll post pictures.

Sometimes I think back at things I might have done and wonder how it all would have turned out. But mostly I recognize that the path I took turned out pretty darn good.

I just wish we could get nine lives like a cat and do something completely different with each of them.

PS: It sounds like you need a resident camera person during your author talks so that you can relax and enjoy the talk and handle all the hosting responsibilities and let someone else make sure to get the pictures. I'd volunteer but the commute is a bit long. sigh.

I suppose if we had nine lives apiece, Dawn, we'd all want a dozen more, but nine sounds good to me. A resident photographer sounds good, too, but I think for now I'll work on my memory, and that should do the trick. If it works.

I decided to upload some of the photos I took at the Chihuly exhibit. You can find them here.

Thanks, Walt. Now I'm wondering (stretched association) if you and Marjorie have ever been to Columbus, Indiana. The visitor center there has a large Chihuly, but the town itself deserves a good, long visit for its world-class architecture.

I don't think we've ever been to Columbus, Pamela. But we'll keep it in mind if our path ever takes us near there. We enjoy interesting architecture.