Were You There? If Not, Here's What You Missed 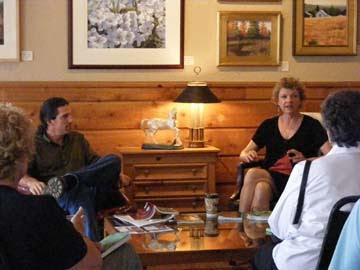 Visiting writers Anne-Marie Oomen from Empire and Benjamin Busch from Reed City (currently, not originally) arrived in Northport on a slightly drizzly Thursday afternoon. It was, I told the audience at Dog Ears Books in my brief introduction, the first real conversation between these two writers, and the rest of us were privileged to be on hand to “eavesdrop” on it. 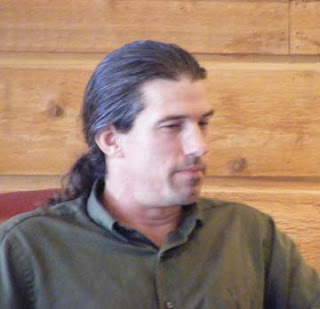 Ben spoke of his writing as a search that more resembles an ellipse than a straight line. “I’m distracted by bright, shiny objects,” admitted this actor-photographer-filmmaker-writer. Poet-playwright-essayist-teacher Anne-Marie, reading from her recent book of travel essays, emphasized the importance of maintaining an openness to new experience when traveling off the beaten path. “You’ll find plenty to write about, if you do that,” she advised. 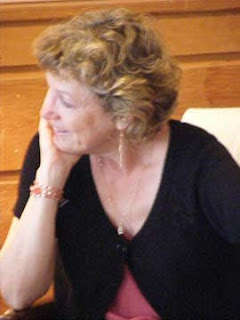 Despite the openness to life that she needs to maintain, Anne-Marie agreed with Ben that a writer’s life always includes a sense of partial spectatorship and that, while attention to the moment is crucial, further discovery always takes place later, in the writing itself.

A bookseller staging an event, like a hostess giving a party, knows the sense of spectatorship, too, that feeling of not being wholly present in the enjoyment of the moment. I’d set up chairs before the guests began to arrive, but as the crowd grew we had to add more, and still people continued to arrive. That’s always a good thing but requires constant vigilance—greeting and seating without undue interruption of the proceedings. Traffic noise from the street: I had to close the door during the reading, and then, good-by breeze! A fan helped move the close, humid air around but also interfered with hearing the writers read their excerpts and the casual, conversation between the two, so the fan couldn’t stay on fulltime, either. I sat behind the audience, rather than up with the speakers, to make sure the speakers were audible and the air not too stifling, only interrupting a couple of times to suggest returning from discussion to reading. It wasn’t like having Anne-Marie and Ben all to myself on my front porch at the farm (with all our spouses present, too, of course), but I take pleasure in sharing writers with others, giving their presence and living voices to my bookstore patrons. Though the writings are always the true, original gifts, as a bookseller I enjoy giving this secondary gift to my community.

All that is beside the point, and I don’t know why I’m even mentioning it, except that it’s part of my memory of the event, because--fan off, door closed, chairs crowded close together, bookseller distracted from time to time--none of that discouraged audience attention. Poets Al Bona and Todd Mercer and mystery writers Elizabeth Buzzelli and Robert Underhill were among those present, and naturally they, as writers, would be attentive, but so was everyone else, and I wish I could have heard every single conversation after the reading, but I was too busy selling books to circulate in the happy, buzzing crowd.

What new works will Oomen and Busch give the world in the next decade? All I know is that we who were together on Thursday will be glad to remember being with them in Northport on that rainy day in July 2010.

There was just time for the bookseller to have a drink at Stubb’s Sweetwater Grill with her writer guests before they sped away to other commitments. Hugs all around. So quickly over, after all our months of scheduling and planning! Did it really happen? 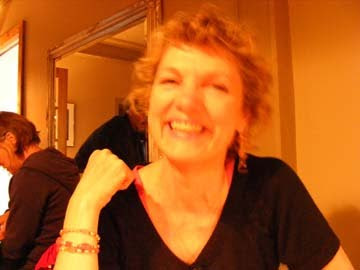 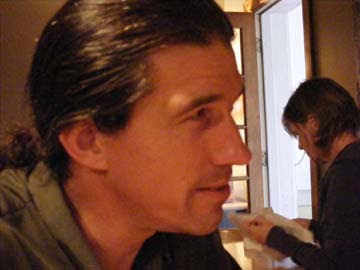 “Nothing is fully real until I share it with Charles,” a friend wrote to me many years ago. (That friend and I still write letters on paper to each other, folding the paper, addressing envelopes, affixing stamps and mailing the letters.) So home in the rain I drove, Sarah beside me, to share stories and photographs with David, who was resting up for a big Friday of his own events. He will be at the Artisan Design Network (ADN) gallery in Traverse City from mid-morning to mid-afternoon and then at the big annual Art Leelanau bash in Leland later in the day. This is summer for us: nonstop.

And now, next at Dog Ears Books, this Sunday we will have author Stephanie Mills from 2 to 4 p.m. See my last post for more on her latest book or just come to be surprised and delighted.
Posted by P. J. Grath at 5:40 AM

PJ you have such a gift for gathering readers and writers into a conversation. And you have to be much more flexible than the party hostess, as you never know who's coming! Northport is blessed by Dog Ears and you.

I keep remembering more people who were here as my brain settles back down again. Novelist S. K. Wolfe (known to Northport by her other name), African historian Kenneth Wylie, and book designer Dan Stewart were here, too. I wish I'd thought to have a guest book for Oomen and Busch and audience members to sign and write comments in! One of those "escalier" ideas--too late my brilliance kicks in....