On the Water, Part III 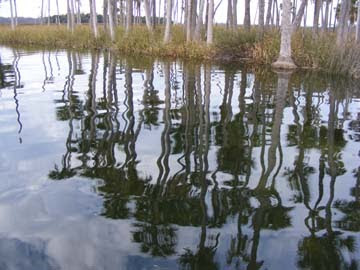 Some of the most beautiful scenes of our Sunday on the water were along the palm-lined mouth of the Weeki Wachee River and adjacent salt marsh sawgrass coast and palm hammocks past Bayport. 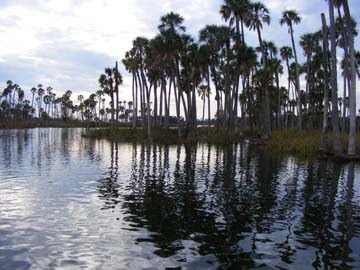 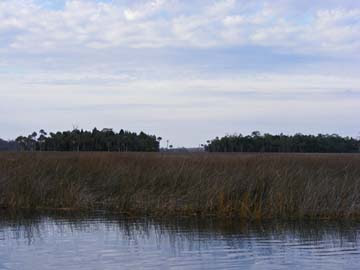 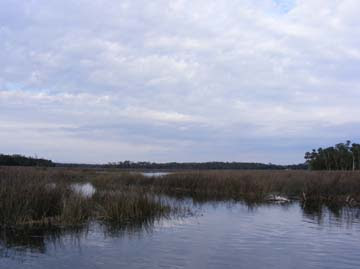 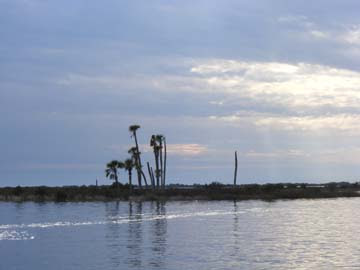 Among pictures I failed to get were those of manatee greeting us as we made our way upriver. Unlike dolphins, these ungainly marine mammals don’t leap through the air in graceful arcs, though they do glide silently through the water alongside a boat in much the same way. And I must say that the old river and ocean hands in the boat, while they may not have my eye for the funky, are aces when it comes to spotting manatees. They also know where all the osprey nests are.

Well, because the tide was high on our return to Hernando Beach (where we caught a ride back to Aripeka), and because Captain Steve has been boating in these waters for thirty years, he was able to take a shortcut from one channel to another between two little islands. Thrill ride! Shrimp boats (the chief shrimp fishing in these parts is for bait shrimp, I’m told) were going out as we were coming in, and I would have liked to get pictures of those serious watercraft, but our sharp turn into the channel caught me by surprise, and it as all I could do to hang on. 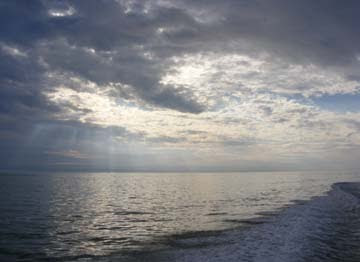 And now that a week of heavy socializing is behind us and we’re caught up on laundry, the Pack of Three (like Gang of Four or Group of Seven) is getting back to its quiet routine. Sarah loved all the company, but she was happy to see the dog park again, too. Now, if only we didn’t need the furnace indoors and heavy jackets outside! It’s all right. March will blow in soon.
Posted by P. J. Grath at 10:07 AM

I so enjoyed the cruise. Seeing palm trees reflected in the water, watching sawgrass ripple in the breeze - ahh.

Pile the whole pack on the couch under a comforter and read. In fact, that sounds so good I think I'll go do it myself.

What beautiful photos, Pamela. I can smell the saltwater. Do your fingers swell up a little from the salt? I especially loved your first photo of the trees reflecting in the water.

What a wonder that you could see some manatees. Love those huge ungainly animals. It's such a thrill to see them.

You have so inspired me with these photos and Florida-talk that I have changed the computer's desktop to an egret photo. And my daughter & I are counting down the days until we reach Florida. (I believe it's March 10th for me.) Will wave as we fly overhead.

wonderful pictures! The second grassy one makes me think of a painting David might paint!

Ah, yes, the sun and the water! We in Michigan know well such charms, don't we? And yes, David loves to paint these scenes. Kathy, where in Florida will you be?

Sorry, Pamela, it's taken me forever to answer your question! We will be in Fort Myers Beach. A bit south of you. Heading out on Wednesday for a glorious and (hopefully) warm week. Of course anything is better than the 30's and 40's, right?