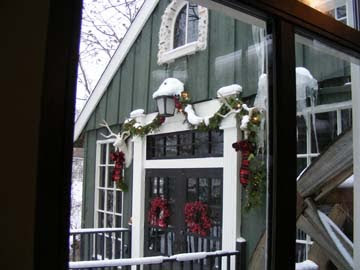 My son recently sent me a link to a news story about desperately cold British pensioners burning their books to keep warm. David, my husband, thought that was an interesting idea and one we should keep in mind for the future, if we need it. Naturally, I hope it won’t come to that, however uncertain the future of bookselling.

Thursday, yielding to temptation with no defense to offer, I left the Leelanau Township Library in Northport with borrowed reading material—as if I needed more, especially this busy week before departure. Crazy, I know. But the Michigan Quarterly Review, Fall 2009 Special Issue, was entitled “Bookishness: The New Fate of Reading in the Digital Age,” and the cover featured a photograph of Shaman Drum Bookstore in Ann Arbor, Michigan, with a big “GOING OUT OF BUSINESS SALE” in the front window, so tell me I didn’t have to read that?

Our next stop after the library was the new coffee house in the old but beautifully remodelled Willowbrook building on Mill Street, but it wasn’t until we got back home that I got seriously into the MQR. The diversity of tone in this issue is delicious: the featured symposium is a smorgasbord of reflections on books, reading and the digital revolution. Paul N. Courant (“New Institutions for the Digital Age”), for example, meditated on what the change from printed paper to digital archives means for libraries:

One of the important features of a book is that you can put it down and pick it up again. You can put it on the shelf and return to it, and unless something strange happens it will still be there next year, next decade, next century. It is even more likely to be accessible in the distant future if it’s a library book that was returned to the library.

I might quarrel with Courant over that last sentence. Suppose the librarians decide to de-acquisition the book I go back to find again? I think I’m more likely to be secure of finding the book again if it’s in my own private home library--but then, mine is the perspective of a bookseller (a bookseller who has attended many library sales, I might add), not that of a librarian. I was intrigued by his observation that digital texts, while cheaper to obtain and house than books, also require vigilant maintenance right from the start (“electronic record is subject both to bit rot...and to format obsolescence”), whereas old-fashioned books on the shelves can go 50-100 years without needing any particular care.

Mice crept into at least two articles. Did you know that mice prefer hardcover to paperback books? They like the glue.

David Kirby (“The Traveling Library”) was fascinated to learn that though most of his summer session students in Florence, Italy, did not own e-readers and had no desire to own them, they believed that traditional books would be obsolete in 20 years. Because that’s what they’ve been told? We were told decades ago to expect the “paperless office,” but that hasn’t happened yet.

The piece that stopped time in its tracks for me, though, was “Growth Rings,” by Benjamin Busch. There’s no way I can do it justice with a brief characterization, and when I consider pulling out an excerpt or two, the choice is overwhelming. Because the essay is so complex, I will take a few sentences from near the beginning to indicate the mastery of the writer and the direction of his thoughts:

I wondered how many books and manuscripts, notes and letters, were macerated, recycled, and flattened into new paper. So much language being erased, and new language coated onto the bleached threads. Where does that first record go? In the forests, later growth rose, nourished by the soil made of rotted trees that struggled first on the bedrock. In this endless circulation of dead matter, where is the first language? If you look closely enough at a page of a book until the smooth paper is exposed to be a tangle of broken wood, could you see the dents on those pieces of fiber where other words had once been imprinted on them? Were there yet traces of pens marking ideas into notebooks? Were all the first thoughts and last words there? 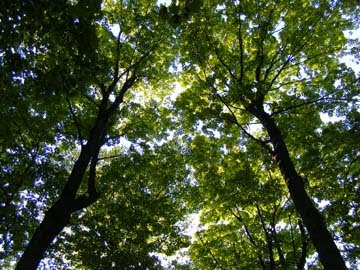 Reflections on parents and their books and writings, along with the author’s time spent in the woods, along a stream, as well as his sense of books as “trees pressed thin,” his love for books as objects, cast a spell over me as I read.

The writer will die, the reader will die, and the mice will come for the papers they left in boxes. We will all be covered with a blank white sheet. But there will be a shelf somewhere where the book will survive. Someone will walk into the empty room, blow the gathered dust from it, sit, and begin reading in the light of a window. The book will change what they see outside. Then the reader will consider the placement of the book and the book will remain, again, where it is placed.

Recall that this was a feature Courant also had noted about books: Put a book on the shelf, and you can come back to it. It will not be erased from the shelf’s memory. It will not expire and be deleted. If it is your book and if you choose, you can take it down from the shelf, wrap it up, take it to the post office and send it to a friend. The book you own is yours to give.

I am not arguing with anyone who prefers to read electronic texts rather than to own books. To each his own. Different people, different priorities. As for me, though, I choose books, day after day, now and for the rest of my life. I would not be myself without them.

This is, by the way, my 600th post since I began "Books in Northport." The milestone almost slipped past me, but I caught myself just in time.
Posted by P. J. Grath at 1:15 PM

I read some time ago that Picasso burnt some of his canvases in his early days, to keep warm!

It is unusually cold for us here in the UK - we are not used to it!

The Busch quote is beautiful - I would like to read his whole piece.

Congratulations on your 600th post! I look forward to many more.

At this time, I have large numbers of extexts AND paper books.

The book-burning-for-warmth thing sounds surreal. It reminds me of something I read about the railways in Egypt in the 19th century. Apparently mummies were so ubiquitous that they were burned to power steam locomotives.

First, thanks to both of you on the congratulations, though I now realize I slightly jumped the gun. I had written the post and scheduled it to upload automatically later in the day and didn't realize it was already counted, because scheduled, in the 599 number. So next one will be 600th for real.

There were so many beautiful paragraphs I could have quoted from "Growth Rings." I urge everyone to get their hands on the Fall 2009 MQR and read that piece.

Burning mummies???!!! dmarks, you are a wealth of astounding facts! We did have friends who did a Peace Corps stint in one of the -stans, a very rugged and rural place, and the wife told us about burning her last paperback book one page at a time while waiting for her husband to return, presumably with fuel for the fire.

Now there are services that will capture an entire blog and create an editable file that the blogger can fuss with before the file is printed as a - ta-dah! - book. On the other hand, if even mummies can be burned for fuel, I expect that no matter what I do with my pixels they will one day vanish. And, um, when they do, I may well be past caring. But today, I am frisky and your post is absorbing and I hope you'll keep writing them for a long time.

VERY sad news re Shaman Drum, one of my all-time favorite bookstores, along with City Lights and Dog Ears.

Love the quote--a pentimento of language.

Karen, it is sad about Shaman Drum closing, but I am so flattered by your putting me in company with that store and City Lights that I can't wipe the big smile off my face.

Here in Joliet, Illinois, where we are visiting my mom for a couple of days, I found a new-and-used bookstore that has been around for over 30 years. Took some pictures, bought a couple books, and will post a story on my blog sometime in the days ahead.