Goodness in the Work of Toni Morrison 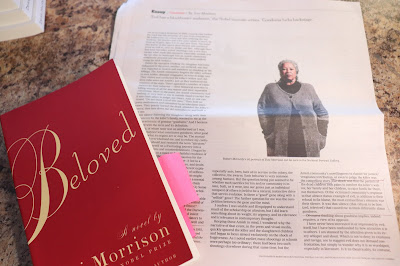 In an essay on “Goodness,” published in the September 8, 2019, issue of the New York Times Book Review, the late author Toni Morrison wrote of her search for goodness in American literature of the 19th and 20th century. She found that, generally speaking, with the exception of satirical works such as Don Quixote and Candide, it was evil that inspired writers to “vivid language” and gained for them a “blockbuster audience.” Those novels of earlier times ended, however, with redemption and the restoration of order, virtue its own reward in the triumph of the long-beleaguered protagonist.

The movement away from happy endings or the enshrining of good over evil was rapid and stark after World War I. That catastrophe was too wide, too deep to ignore or to distort with a simplistic gesture of goodness.

As was always true in her fiction, Morrison uses forceful, succinct, and vivid language to express her findings on good and evil in literature. “Evil grabs the intellectual platform and its energy,” she notes.

It hogs the stage. Goodness sits in the audience and watches, assuming it even has a ticket to the show.

She finds modern novels -- again, in general — uninterested in goodness, except to expose “the frailty, the pointlessness, the comedy” of it. The conditional “in general” is important because the importance of Morrison’s own work cannot be overstated, and she herself was very interested in goodness and its role in fiction.

Searching for definitions of goodness in philosophy and science, she finally narrowed the concept down to altruism and theories of altruism down to three: (1) learned behavior; (2) a form of narcissism; and (3) “instinct,” a genetic predisposition passed down through (genetic) evolution. She turned then to her own work and took examples illustrating the three theories from, respectively, A Mercy; The Bluest Eye; and Sula.

Expressions of goodness are never trivial or incidental in my writing. In fact, I want them to have life-changing properties and to illuminate decisively the moral questions embedded in the narrative. It was important to me that none of these expressions be handled as comedy or irony. And they are seldom mute.

What a breath of fresh air, even in the midst of the most horrible tragedies in literature (horrible because we as readers know such events took place not only in the lives of fictional characters but in our own country’s history), to find goodness given un-ironic voice! Morrison concludes her essay by telling us that “[a]llowing goodness its own speech” is crucial because it allows a character to learn something, “something vital and morally insightful….” Articulating goodness is an expression of, as well as a means to, self-knowledge.

Such insight has nothing to do with winning, and everything to do with the acquisition of knowledge. Knowledge on display in the language of moral clarity — of goodness.

I had reached the next-to-last page of the first section of Morrison’s novel Beloved when her essay came serendipitously into my hands. I think Paul D’s words of judgment would have leaped off the page at me, anyway, but there’s no saying for sure. Anyway, Sethe is telling him that her act of violence against her children worked, in that it kept them from being returned to the plantation where she (before her escape) and others had been violated. Paul D insists she should have found some other way to save her babies.

“There could have been a way. Some other way.”

“You got two feet, Sethe, not four,” he said, and right then a forest sprang up between them, trackless and quiet.

Is Paul D’s articulation of a moral difference between human beings and animals without language an expression of moral clarity? Does it enlarge his self-knowledge at the time of his speaking the words?

Paul D had only come to know what Sethe had done when Stamp Paid, the self-named man who smuggled other enslaved people to freedom, showed him the story in a newspaper. Stamp showed him the paper because he believed in truth and felt Paul D should know the truth of the woman whose life he had re-entered, but afterward he had doubts. He tried to set that truth-telling, going behind Sethe’s back to Paul D, against other “sneaking” things he had done, “always for a clear and holy purpose.” He had sneaked

…runaways into hidden places, secret information to public places. Underneath his legal vegetables were the contraband humans that he ferried across the river. Even the pigs he worked in the spring served his purposes. Whole families lived on the bones and guts he distributed to them. He wrote their letters and read to them the ones they received. He knew who had dropsy and who needed stovewood; which children had a gift and which needed correction….

In other words, Stamp Paid was a good man. But was telling Paul D what Sethe had done a good thing, as he believed it was when he did it?

Afterward—not before—he considered Sethe’s feelings in the matter. And it was the lateness of this consideration that made him feel so bad.

Motivation is what matters to Morrison, as it did to Kant, in determining goodness. Amy’s apparent kindness to Sethe in caring for her wounds, and Baby Suggs’ seemingly generous neighborhood feast — despite the gentle, effective nursing in the one instance and the joyful sharing in the second — both appear imperfect in the author’s eyes, tainted by pridefulness, illustrating the narcissistic theory of goodness. We don’t see either Amy or Baby Suggs growing in self-knowledge as a result of reflecting on their own behavior, though it seems impossible to say that what either did was not good. Certainly, neither was a bad person. And neither, certainly, was Sethe herself, though her goodness through most of the story can be seen as instinctually motivated.

Stamp Paid looks to me like the clearest example of goodness, the character who gains the most, articulately, in self-knowledge (his author’s own definition). He not only practiced goodness as a habit (Aristotle’s definition) but reflected on his deeds and their meaning, and in questioning his own motives in revealing Sethe’s story to Paul D, he created his own opportunity for further moral growth.

Sethe and Paul D take longer to open themselves to self-knowledge, but who can blame them? It’s a long road because they have had so much pain and are protecting themselves from more until, finally, their shared past allows them to face a future together and to see not only themselves but each other in new and important ways.

I haven’t told you anything really about the story, because that you should read for yourself. Beloved is one of the most powerful American novels ever written, Toni Morrison an outstanding American writer. And for me her literary investment in “making sure acts of goodness … produce language” is as important as her command of language itself.

Go elsewhere for superficial cleverness or smart irony. Come to Toni Morrison’s work for clarity, truth, and fiction to help you grow your soul. 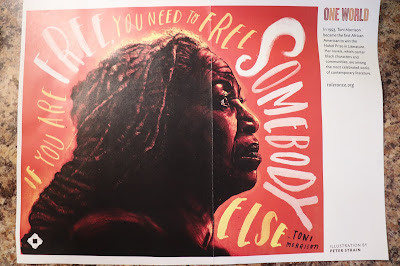