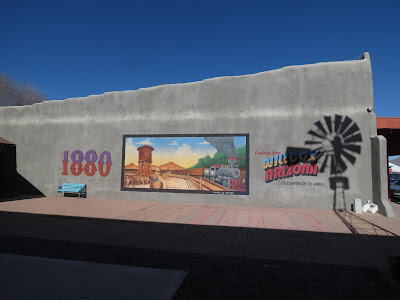 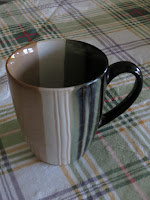 We had an interesting if ordinary weekend. No huge adventures, but we stumbled on a little flea market in Willcox on Saturday, where I was happy to find a woman with lot of housewares priced to sell. I found this lovely coffee mug, three others not quite as stunning (but the Artist is happy with solid black), and a steamer pot, with steamer but without lid. I love the Southwest colors of my mug. David bought a few DVDs he can watch on his laptop if he gets too desperate without movies.

But we went to the movies, too. On Sunday afternoon we went to a matinee at the Willcox Historic Theatre, down on Railroad Street. The movie was “Hostiles,” one a lot of friends back in Michigan have seen recently. 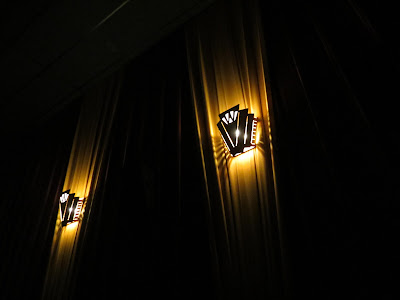 In discussing the film afterward, we agreed that “Hostiles” was pretty much a set piece. You knew right from the beginning that the Indian-hating cavalry officer would come around to an understanding with his old enemy, Chief Yellow Hawk, and you knew the chief would survive the trip to die on his home ground, or at least in sight of it. (Spoiler: He makes it all the way.) Once the woman whose family was murdered joins the group on the trail, you know she’s going to end up with the cavalry officer, and you also know that the captain’s friend, the bearded one who has lost track of how many people he’s killed (he tells a young soldier, “You get used to it”) and says his soldiering days are over — you know he’ll be dead before the last frame.

I’m not saying I didn’t enjoy aspects of the film, but what I enjoyed most was the scenery. The opening scenes in New Mexico, vast grassy desert and rocky mountains (though not the Rocky Mountains) were very much like the scenery here in Cochise County, Arizona. So if you see the movie, you’ll have a good idea of what we see every day when we go outdoors from our cabin. 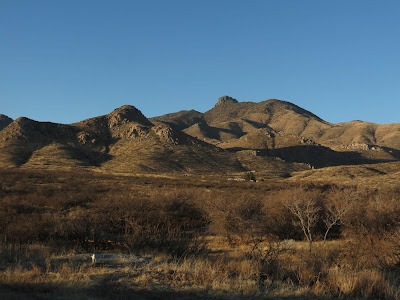 Back to the movie, though. It was very much a white man’s movie. The chief is noble and stoic, the settler woman whose family was murdered is blonde and beautiful, the cavalry captain ruggedly handsome. Both the captain and his doomed, bearded friend come around in the end to realization of the white man’s sins against the Indians, and the captain “does the right thing” by the chief and his family, but in the end all the Indians are dead except the little boy, who is taken under the wing of the woman who lost her own children, and we’re pretty sure the captain will complete that little family circle. As I say, a white man’s movie.

It reminded me of the French movie, “Indochine,” with Catherine Deneuve. That film was set in Indochina, obviously — Vietnam — and clearly the challenge to the movie makers was how to make a film about colonialism and war in Vietnam, a sad chapter in the history of France, palatable to a French audience. I’m hazy now on the details but retain a general impression that the young Vietnamese man, near the end of the film, acknowledges Catherine Deneuve as his “real mother,” which I took as an intentional subtextual metaphor, Vietnam acknowledging France as its cultural parent. Again, white man’s view.

We'd been to the only bookstore in town on Saturday, a little shop run by the Friends of the Library, where books are cheap and where local honey and jam can also be purchased (mesquite blossom honey seemed an appropriate choice), and among a selection of battered volumes in French and Spanish -- Spanish because I'm learning and French because I don't want to lose it -- I also bought a river story. David and I both appreciate river stories, and I thought Swift Flows the River might be good for bedtime reading aloud, an imaginary travel up the Columbia. Wouldn't you know! The novel begins with an Indian massacre! I didn't even get through the whole scene before laying the book aside. I'll probably go back to it, because the map endpapers promise quite a lot in the way of upriver exploration, but why did it have to begin the way it did? I feel trapped in the history of my country.

And aren't we all? Trapped in the histories of our various countries, trapped in world history and world "progress," such as it is? There was a quote from D. H. Lawrence at the beginning of "Hostiles" that I'll have to look up online....

The view of the country around here pleases me, but I cannot claim the view of the hawk. What does she see from her high, slow swoops across the sky? I read the Range News and wonder at the subtext of stories on various local and regional issues. The starting point for any view I have, on any subject, is that of a white Midwestern American woman of my generation, but I hope I can imagine, if only imperfectly, how those of different backgrounds might see my view and how it surely differs from their own.

I have reviewed the first eight chapters in Ultimate Spanish that I'd labored through back in Michigan and am now launching into Chapter 9. Clearly, any success I manage to achieve will be due to review, review, review. ¡Siempre me olvido! It is so easy to forget what one has "learned" only recently, easy to fall back on what is familiar but wrong in the new context, since ça fait longtemps or it's been a long time is not the same as hace mucho tiempo.

And isn't that exactly the problem with the subjective, parochial, and monocultural points of view that all human beings can't help having? It takes a lot of work to get outside and stay there for any length of time. The filmmakers tried with "Hostiles," but the pull of unconscious and deeply held narrative expectations and standards brought them in the end to dead Indians and a conventionally handsome white couple left with the Indian boy they would adopt and raise.

What would that boy's life be? What was it up to this point, and what would it be from now on? Through his eyes. Now there would be a movie.

And here's the D.H. Lawrence quote:

"The essential American soul is hard, stoic, isolate, and a killer. It has never yet melted." 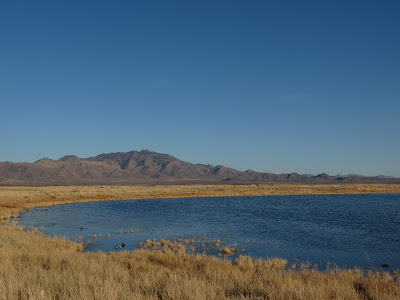 I'm very bothered by some of your statements about the movie Hostiles. You make the career officer's statement to the young officer, in essence, 'you get used to killing,' sound as if he is blase about killing. It's very obvious from his acting, his hesitation before speaking, his eyes and much else that it has affected him mightily. It's obvious that it wasn't easy for the young officer.
Why do you think the officer killed himself? There is much depth in this movie. Your comment about all Indians being dead is true so far as the Indians in the _movie_ but only in the movie.

Let me answer your question first. I think he didn't like the person he had become. Maybe he even feared he had become or would soon become like the escaped murderer he caught up with and killed. I think he was serious when he said "you get used to it" but was unhappy with that truth about himself. Anyway, you are right, there is quite a bit of depth in that whole issue, that character. There were multiple points of view offered in the film as a whole, also. I think it tried. And yes, the dead Indians are "only" in the movie, but that's part of my point. I'll give the movie-makers credit for avoiding what was for years a Hollywood cliche, and that is having the black character being the first one killed. They avoided that. And we aren't sure that his life is over in the last scene he's in, either. It was the Frenchman, the no-nothing kid, who was the first one picked off. I'm not saying it was a terrible movie, by any means. I'm just saying it was a white man's movie, and I stand by that statement.