A Ghost Town New to Us -- and More Serendipity For one reason and another, we have not been adventuring far from our usual daily track as often as we did three years ago. The Artist’s birthday, though, was a perfect occasion for a road trip. It was a beautiful, sunny day, and we set off down the Kansas Settlement Road for the first time this winter. As things turned out, we never did reach the destination we had originally set for ourselves but instead found ourselves surprised along the way. We had not foreseen, for example, that we would discover another mining “ghost town.” But all in good order.... 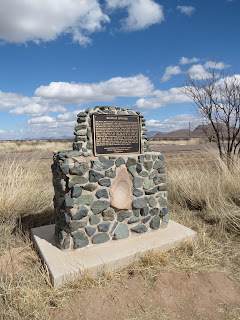 We had both been curious for quite a while about the name of the Kansas Settlement Road. The name definitely seems to indicate a story, and I thought perhaps a historic monument we had never detoured to see might provide the explanation. It did not. And that only makes sense, since the monument is not on the Kansas Settlement Road but a few miles down  Birch Road to the west. The monument’s story, as you see, tells how the Sulphur Springs Valley got its name, along with the sad episode of the short-lived Chiricahua Indian Reservation. We came, we read, we moved on. 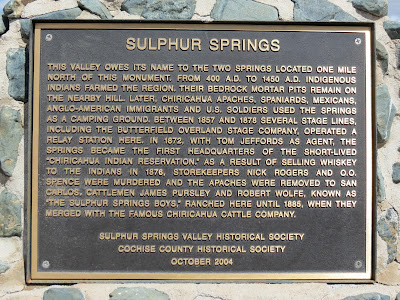 Instead of turning back to the Kansas Settlement Road, however, we kept to Birch Road until it reached Hwy 191, a road we would have come to eventually, anyway. Along our resumed southern direction, however, temptation came along again, and we detoured once more, this time to the town, or “townsite,” of Pearce. 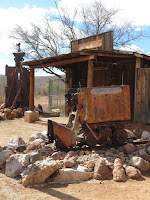 For a population center that once boasted 1500 residents, there is not much remaining of Pearce, but the handful of buildings are definitely historic in appearance. There was indication of several current, ongoing business ventures — an antique shop, pottery studio and shop, and a local goat’s milk soap production (that last not pictured here — my omission — sorry!), but we saw no OPEN signs and no sign of any living human being. The Artist’s first question in any remote location is, “Where do they go for a cup of coffee?” It looked as if a cup of coffee would be hard to come by in Pearce. 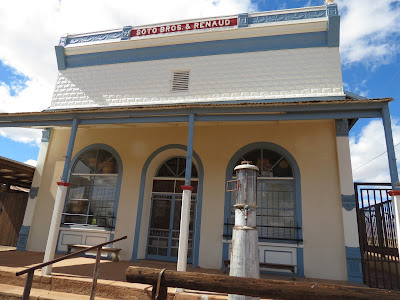 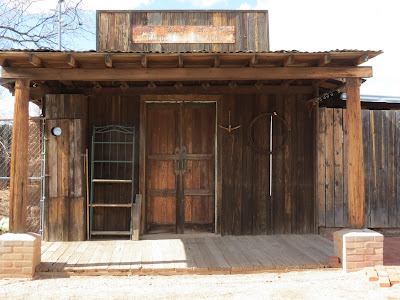 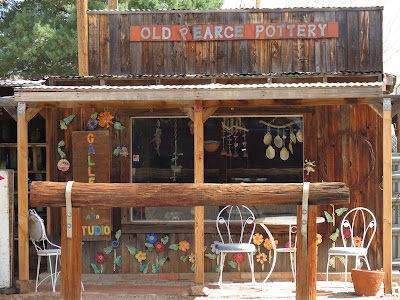 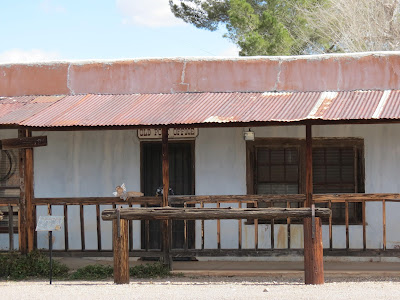 There was a rail to tie up horses, but there were no horses in sight, either.

Back onto Hwy. 191 and down on a stretch more familiar to us, we stopped at the “Cowboy Mall,” which is not a mall at all but a combination grocery-convenience store with a glorious selection of tack — saddles, bridles, bits, spurs — and a couple gas pumps out front. A birthday celebration was going on among the women working the counter, the “birthday girl,” just turned 22, being serenaded in Spanish, English, and American Sign Language. When I told them it was the Artist’s birthday, too, his coffee was on the house. What a great place! There is so much to see at the Cowboy Mall (including a couple sections of used books) that we were there a long time and got into conversation with a retired laborer from New Mexico, now living out of his camper. He was a reader and a bookstore lover, too. After a while, though, I left the two men talking and wandered around by myself, looking at more of what was on offer, and so it was that I found, to my delight, goat’s milk soap from Pearce! Very satisfying! 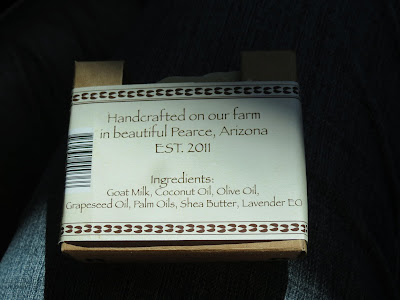 We never did find the elusive road we wanted out of Tombstone and finally decided to save that for another day, but we did not return to our own ghost town empty-handed. We had not only seen another ghost town, but I also managed to find one of its modern products, and that was reward enough, especially since unforeseen, for our day’s exploring.

Sunday afternoon serendipity again played a role in our winter life. All we had planned was a trip to the laundromat. One funny thing did happen there. As I was folding clothes, I was completely inattentive to the television playing behind me, had no idea of or interest in whatever might be on, and then suddenly the word “horses” hit my ear, and I spun around to face the screen. It was some kind of medieval reenactment, nothing I was particularly concerned to watch, but how funny that the single word “horses” should leap out of undifferentiated (to my mind) background sound with such urgent clarity!

When the laundry was done and packed away in the van, I had an idea. We could drive out to the rodeo grounds (officially known as Quail Park but always “the rodeo grounds” to me) and I could let Sarah off the leash to run and then work her through a few commands. We drove out Fort Grant Road, expecting to find an empty field. But that’s what comes, I said to the Artist, of not reading the Range News regularly: it was Junior Rodeo weekend, and we had nearly missed the whole thing! I’d left my camera home, along with my cowgirl hat, but we parked and got out to hang on the rails and watch the calf-roping. Nothing smells as good as fresh horse and cow manure! With all the rain we’ve had, this year’s rodeo wasn’t nearly as dusty, either, as the one we’d attended three years before.

Well, that was serendipity indeed! Horses, horses, horses! I didn't have my camera with me, but I had my eyes and ears and nose to take in beautiful sights and sounds and aromas. Nothing better in the world! Why would I, how could I, not love a place with so many horses collected together? My heart is not yearning to be anywhere but Cochise County, Arizona, this winter.

SO enjoying these posts!!!

I'm glad you are, Barbara. And I will definitely take my camera in with me the next time we visit the Cowboy Mall.

There is horse racing in Tucson if you want to come and stay over a night....
http://rillitoracetrack.com/ come before March 13th when kiddos arrive.

"Nothing smells as good as fresh horse and cow manure!" Sounds like a new business opportunity when you return to Northport. Nothing like that here, only Yak manure and they are to far away to notice.

Barbara, will you be going to the big book fair, March 10-11? We are kind of planning on it but also have company arriving (with his own camper, as we have no extra space for visitors) this Thursday. Well, I will e-mail you....

Keith, has the Artist ever talked to you about King Ludwig? Ask him the story!