Almost three weeks ago, when we first crossed the state line from New Mexico into Arizona, my searching eyes were disappointed not to see snow on the high peaks of the Pinalenos to the north, but I accepted the evidence of a warm, dry winter. What choice was there? Then the rains came to southeast Arizona, three solid days of soaking rain. There was standing water on the previously dusty land, and in the town of Willcox entire streets and intersections had become temporary lakes. Water, water, everywhere! Well, that was exciting!

We elected to make another trip up to Safford in Graham County, only this time taking the straight highway route north and coming back through the mountain pass, a reverse of our usual path. As we came closer to the Pinalenos, I couldn’t believe my eyes, but I couldn’t disbelieve them, either.

Clouds and fog notwithstanding, that white on the mountaintop did not look like a cloud at all. Could it be — snow?


In southern Arizona, altitude is more a factor in climate than latitude. If you travel only 15 miles but gain 1,000 feet in elevation, the difference in climate is as if you had traveled 300 miles north from one part of Michigan to another. Years ago (about 120 years ago, actually), a naturalist named C. Hart Merriam came up with the idea of “life zones” to describe the difference in flora and fauna at successive altitudes in Arizona. He called the lowest zone Tropical and the highest Arctic-Alpine. His system is no longer used by scientists, but I like it, and the white peak I saw on Saturday reminded me that the Pinalenos, like the Chiricahuas, are the only mountains in our “neighborhood” with climate variations ranging from the Lower Sonoran to the Canadian, lacking only the very lowest and highest of Merriam’s life zones. That would put the high regions in the Pinalenos in the Canadian life zone, and since the highest peak in that range is over 10,000 feet, wouldn’t it make sense that rain in Will-cox could be snow 6,000 feet higher, remembering that 6,000 feet is the equivalent of 1800 miles of latitude?

Well, that’s it for me. Until someone convinces me I’m wrong, that was snow we saw on Saturday! I was also thrilled to see rushing water, at last, in almost half a dozen formerly dry streambeds and washes as we entered the town of Safford, and after lunch, as we turned back to the south, I anticipated eagerly our route through Stockton Pass. 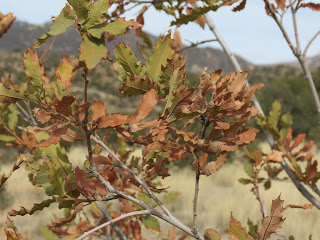 Between Safford and the turnoff for the mountain road, the landscape is dominated by cactus — prickly pear and cholla, some of the latter as large as small trees. This is what characterizes Merriam’s Lower Sonoran life zone. The road up to and through the Stockton Pass takes us into an Upper Sonoran landscape. Here our Michigan eyes delight in trees along creeks and dotting high, open areas of grassland. There are beautiful alligator junipers, familiar to us from the Chiricahuas, and small oaks, too. (The oak is such an adaptable genus, I reflect, recalling oaks of various species in Florida scrub all the way to northern Michigan.) Although not on the highest mountain peaks or slopes, not even as high as Merriam’s “Transition” zone, we don jackets for comfort. 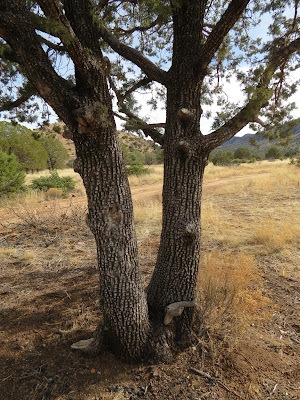 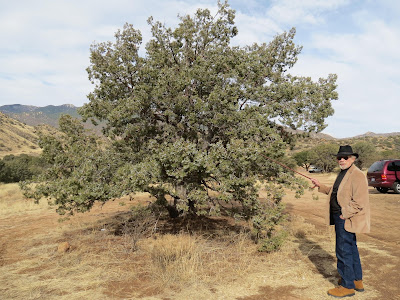 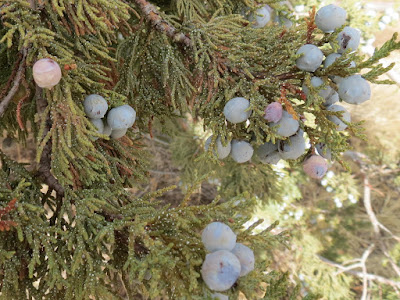 Surrounded by natural beauty, it is difficult to know where to look. Close at hand are fascinating rocks, one with blue-green lichen, another stained blood-red, while in the middle distance handsome trees demand their due, and always, as far as the eye can see, there are beautiful mountain views. The solution, of course, is not to choose but to take it all in. 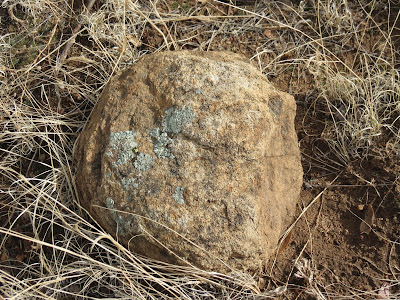 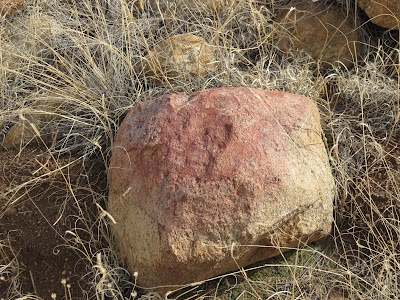 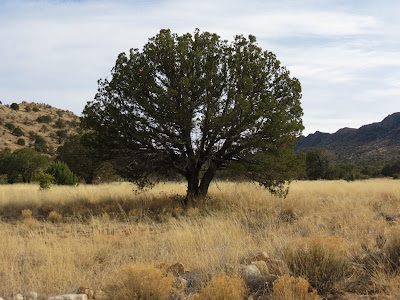 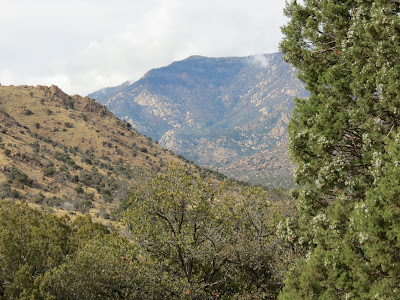 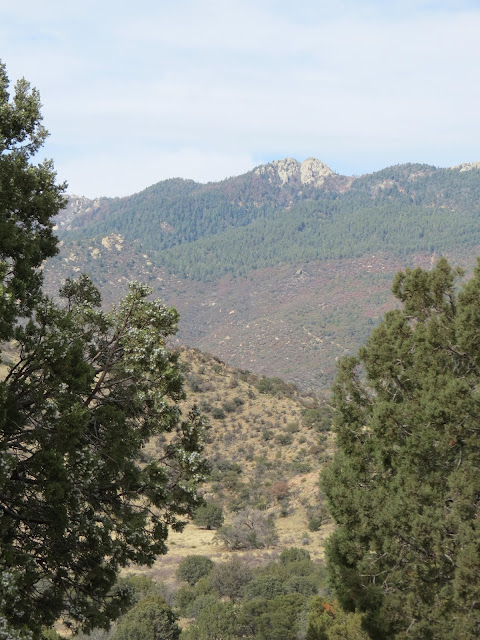 Sarah, true to her nature, relies heavily on her sense of smell. Eagerly she sniffs the cool, fresh mountain air and investigates twigs and ground and blades of grass. 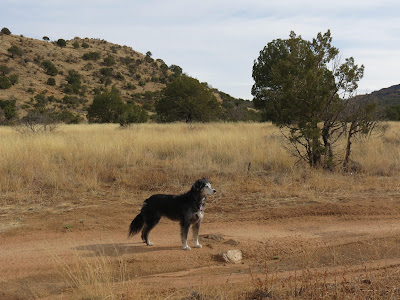 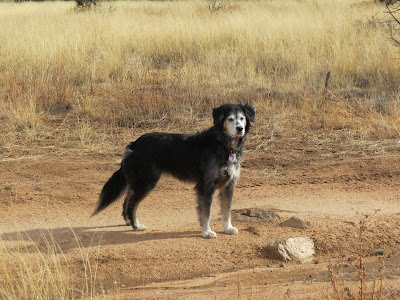 “It’s easy to imagine living here,” comments the Artist. Yes, all three of us find our hearts responding to this beautiful place along our life’s trail.

That was a lovely drive - thank you. It isn't as easy for me to imagine living there - I go a little nuts if I can't get to large bodies of water - but it is a wonderful place to spend some time. I remember one year the California desert burst into bloom because of timely rains. I longed to go see it, and my dad and stepmother longed to take me to see it, but it was not to be. The photos were astonishing. So much in the landscape, hiding in plain view, just waiting its turn. Pets to Sarah. I'm glad you're all having a good time.

Gerry, we both get very excited when we see water! You should have heard me exclaiming every time we crossed a little trickling stream where there had been only rocks and dust the last time we saw it! David, of course, keeps reminding me that he is a Pisces. But even he admits that the mountain and desert scenery "sort of grows on you." I hope you are getting through the winter okay. Got Babs's photo today of a frozen Grand Traverse Bay. But it's colder here, too, this week....