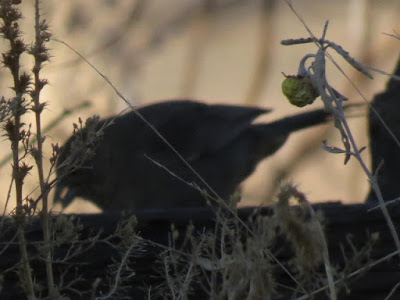 No excuses. I lay it up to personality. Serious birders, like serious collectors, possess a compulsive gene that I lack, so when it comes to birding (as, I fear, many other life activities), I will never be more than a dilettante. Life holds forth too many other compelling distractions.

But birds themselves often serve to distract us from other concerns, bless their tiny hearts! The Artist, famously an aviphobe from childhood, was delighted to see a pair of northern cardinals near the ghost town cabin, the male a striking patch of color against the winter-dull high desert background, and I was thrilled when we were visited by a roadrunner, right in our own backyard. But no, I have no photo of the latter. He disappeared into the dry grass like a ghost, and I think he will be my ghost town ghost from now on: I'll go on looking for him every day and probably never see him again, though he will haunt my winter. 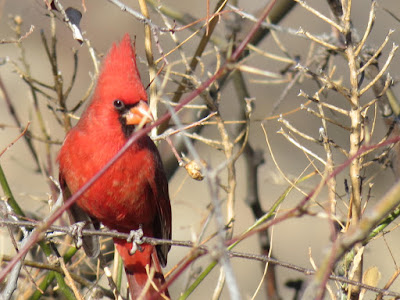 On our first visit to the library in Willcox, I went immediately to the Arizona section to find Birds of Southeast Arizona, by Richard Cachor Taylor. That afternoon, using my camera as both binoculars and recording device, and then consulting Taylor's book, I sighted and identified a northern mockingbird and a canyon towhee. The mockingbird is beautiful -- so elegant! 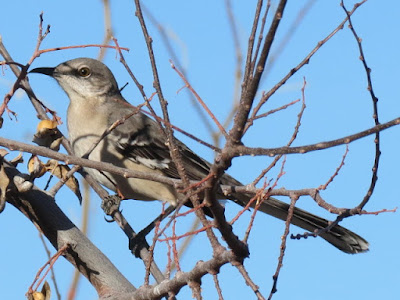 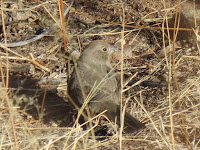 The towhee, on the other hand, is a drab little bird and spends a lot of its time on the ground and blends in with its surroundings that it is hard to see at all. But the canyon towhee is handsome in his own quiet way once you pay attention to him. Taylor says of him,"Forages for seeds and insects on the ground," and that fit. Another comment I find utterly charming is this characterization: "This is the most confiding towhee...." Oh, sweet! A little ghost town confidante! 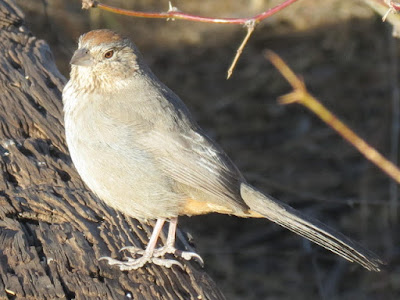 Two other birds had me flipping pages back and forth and reading descriptions carefully, over and over. Was the flicker I photographed a gilded or a red-shafted northern? At last (somewhat regretfully, I admit) I decided it was the latter, owing to the bit of salmon-pink visible under the wings. 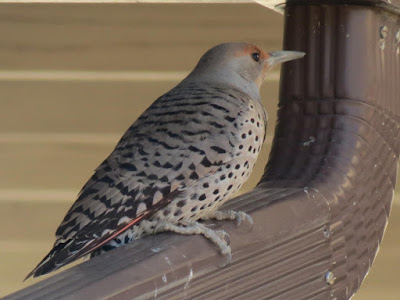 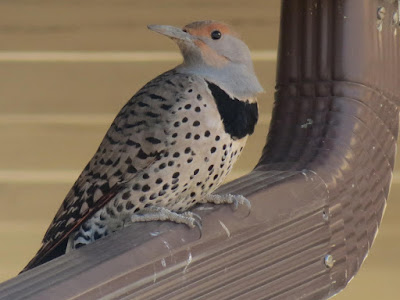 Then the sparrows! Oh, lord, the sparrows! I think it was sparrows that discouraged my girlhood birding so long ago -- so many of them, and so similar, with males, females, and immature birds all different, plus differences in summer and winter coloration. And they are so small, and they never seem to hold still for two minutes! Not holding still, in general, is my biggest complaint against birds and probably why I have always found wildflowers more congenial.

But how about these sparrows (and are they all even the same species)? My best guesses are that they are either chipping sparrows or rufous-crowned sparrows. 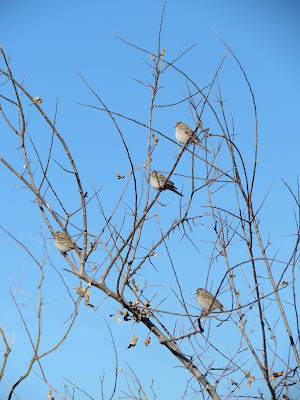 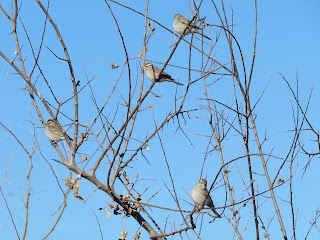 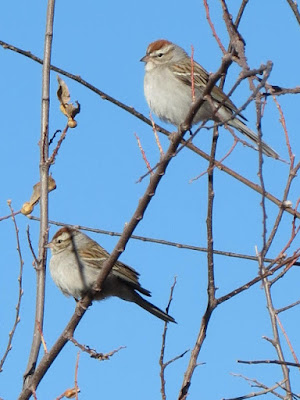 The white eye ring I think I detect by zooming in on one bird leads me to say rufous-crowned, but the photograph of that species in the Taylor book does not show back or wings at all. The rufous-crowned sparrow is common around here, and a common species is usually a good guess, but then chipping sparrows have been common in many places I have lived. Here is one noteworthy bit of minutae on the chipping sparrow: "In SE Arizona, Chipping Sparrows breed regularly only in the Chiricahua Mountains." That means they would not have far to fly from Dos Cabezasto to reach their breeding grounds. But how far does a little sparrow fly in a day?

There is a lot of bird activity around the cabin in the mornings, but in the afternoons the birds seem to go elsewhere, and that gave me time yesterday to complete the tenth lesson in Ultimate Spanish, the first chapter in the book to finish off with a short (two-paragraph) reading. As is customary with learning another language, I am much better at reading comprehension than at originating sentences of my own, and the reading exercise gave me no trouble at all. Listening comprehension -- to native speakers -- is something else again! I can read at my own speed but have to try to listen at a speaker's speed! Need I say more? But there is no point in becoming discouraged. Practice, review, immersion, perseverance -- repeat, repeat, repeat. No other way.

Ultimate Spanish is a book I brought with me from Michigan, a book my friend and I had with us in the Yucatan and which she generously said I could keep. The other two books I checked out of the library were Sky Island, by Weldon F. Heald, and Old Southwest New Southwest: Essays on a Region and Its Literature, edited by Judy Nolte Lensink and published by the Tucson Public Library in 1987. I recommend the latter to all my friends and readers who are students of American literature, noting to general readers that it is a collection of essays on literature and not a literary anthology.

I was particularly struck by "The Other American Literatures," by Rolando Hinojosa-Smith. He sets the stage by citing a brouhaha at Harvard University in 1896 when one of the professors set out to teach the writings of Hawthorne, Poe, Melville, Whitman, and Dickinson as "American literature." Threatened with dismissal the following semester, he caved in and went back to teaching standard English writers. Writers from England were established and recognized; American writers at that time were not.

Another important point Hinojosa-Smith makes is that all writers in the United States are American writers, regardless of their ethnicity or birthplace or place of residence. I am reminded of Jim Harrison's complaints at being labeled a "regional" writer, and I know other Michigan writers who still find it difficult to be recognized simply as "American," a label that somehow gets assigned to those from the East and West Coasts.* Even the term "local writer" can be a double-edged sword, as I have found in my bookselling life: sometimes tourists are looking for "local color" and hope to find it in a book by a "local writer," while other times the tag "local" seems to put a book down the ladder from national bestsellers presumed to be of greater significance.

I am with Hinojosa-Smith on this matter. Writing quality is not dependent on region or writer's background.** Writing deserves to be judged on its own merits.

*Is the Midwest (let's say Minnesota, Wisconsin, Michigan, Iowa, Illinois, Indiana) a region? (Does Chicago stand out from its Midwest background as more cosmopoligan, more like New York?) Does the Midwest, like the West, the Southwest, the South, have a recognizable literature? Should we expect and look for such a category?

**What are the purposes of dividing American writing and writers into regions? What are the pros and cons of categorizing writers by ethnicity? How do you see it? 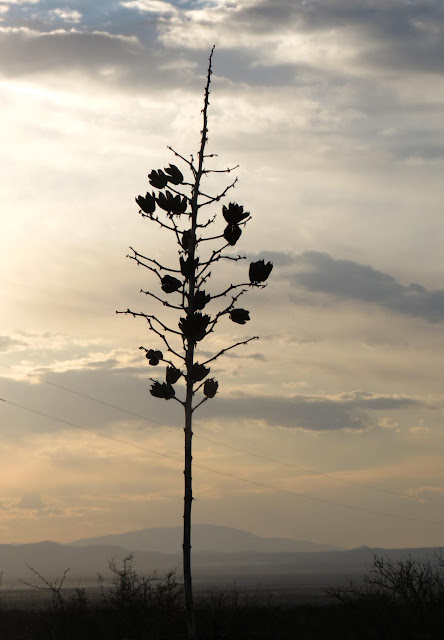 Love all the photos. Thanks for sharing! We saw a cardinal in the back yard yesterday and it was nice to see a bit of color.

I have more photos of the cardinals, male and female, and will post them over on A Shot in the Light.

I love watching the birds at my feeders, and at the parks when they let me get close enough to observe. I'm not good at identifying anything that doesn't come to my feeder though. I'm always amazed about the number of birds in my own area that don't eat at my feeder and that I didn't even know were there.

David asked if I wanted to put out a feeder here, Dawn, but I'm afraid of it attracting javelinas! I scatter a few seeds on the railroad tiles in the afternoons and watch to see what comes.