Sing Along If You Feel It in Your Heart 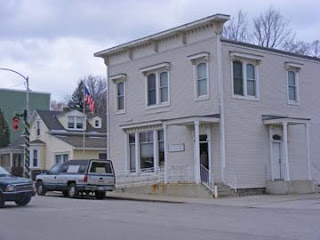 How many of you are old enough to remember “You Don’t Know What You’ve Got/Until You Lose It”? It was a heart-breaker of a song. I had remembered it (incorrectly) as Elvis Presley, but Del Shannon was the recording artist who had the hit, and Ral Donner--not a name I ever remember hearing but another singer of the era--wrote the song. [I'm coming back in to recommend listening to both versions of the song. You tell me--doesn't Ray Donner sound like Elvis?] Today, though, I’m not talking about romantic lyrics and melody but about the United States Postal Service. Why is the post office going the way of rotary dial, “land line” telephones? Hint: The answer has nothing to do with unions.

The government? Wait a minute! Doesn’t the government run the post office? Isn’t that what’s “wrong” with it? Well, besides that pesky online competition, so easily forgotten in the rush to pillory the union....

--I need to interject my opinion here, which is that not much is wrong with our postal service in this country other than declining use, and that is not a cause but the effect of other factors (see above). In my business I’ve been shipping books for almost two decades and have never lost a single one. Prices, both media rate and priority, are a bargain, compared to any other country. Sure, once in a while, you’ll find a grumpy postal employee (one in Florida was my nemesis), but in almost every American post office I’ve ever used, the clerks and postmasters have been courteous, friendly, helpful and informative. I have always approached them as my friends, and they have generally responded to me in kind.

How many Americans realize that while the USPS is mandated by government, it receives no government funds for its operation? Like the Soil Conservation District offices and services, the USPS has only the income it can generate from the public buying its services. At the same time, however, it must operate within rules made for it by the government. Think that one over: It’s up to you to generate the income to run your business but not to determine changes to improve its profitability. How about we tie your hands behind your back, sew you up in a sack, throw you overboard and see if you can make it to shore? If not, good riddance! That seems to be the way the government is treating the postal service these days. I'm not going to tax anyone's patience with quoted material, but if you're interested you can go here and here and any number of other places. Take a look around.

I don’t want to pay bills online. I don’t want to have to ship every little package via private carrier. Recently someone in Queensland, Australia, send an e-mail query about a book I had for sale on my website. The customer (yes, we did figure out the logistics eventually) first suggested a private carrier which I won’t name here, but when I investigated I found that the cost to ship the $50 book by that method would be over $100. Back at my trusty local post office, on the other hand, I was given a price of under $50, packaging the book in a flat-rate box, with no waiting for the private carrier’s truck to pick up the package, either. I just boxed up the book and carried it in. Picture me as one happy, satisfied postal customer!

Our little post office in Northport is, I admit, outstanding, as was shown recently when our postmaster, John Weber, received an award as postmaster of the #1 post office in the district for the fourth quarter of 2011. Northport, #1 in the district stretching from the U.P. to Ohio! Good work, John! But I was always happy with the service in Leland, Lake Leelanau and Kalamazoo, Michigan, and was happy in Champaign, Illinois, and Cincinnati, Ohio, too. 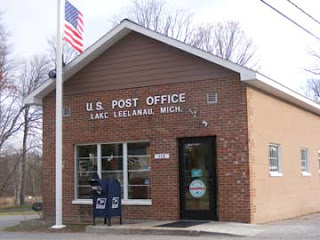 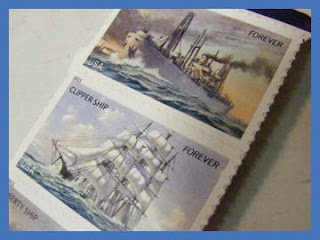 Yes, sometimes we’re frustrated at the post office. Customs forms are longer and more complicated than they used to be. Stamps are a little more expensive. (They’re still cheap, compared to other countries!) Having mail forwarded invites mixups and headaches, and vendors and other senders don’t always package as carefully as one might wish. But who catches the flak for whatever problems come up? No one but the man or woman behind the counter, the only face you see, the only human being to whom the public can express frustration. And in what infinitesimal percentage of cases is that person to blame? Postal employees do not make the rules, do not set prices and do not determine hours of operation. I've heard complaints that our little p.o. is only open for an hour on Saturday morning. We have Saturday delivery, people! We have an hour with the counter open for service on Saturday! Plenty of places in the country don't have what we have, but keep those complaints rolling in, by all means, if you want to pound another nail in the coffin.

How to wrap up this post? Maybe with a childhood memory.

When my sisters and I were little, my father was an officer for a while of some organization that received mail at a post office box, so every Sunday after church one of our stops was the main downtown post office. A post office in those days, like banks in those days, was an imposing place. The floors were marble. The boxes were brass. Everything was substantial and seemingly designed for the ages. There were two other stops on the way home--the drugstore, where my father bought the big Sunday newspaper, and a donut shop, where there were giant pretzels in a jar for a nickel apiece. Three stops, three daughters. How did we decide which girl got to go into which place each week? The pretzels were a treat, the drugstore full of interesting things to look at, but the post office stood out above the other choices like a cathedral over thatched-roof huts.

The first letters I ever mailed bore 4-cent magenta Lincoln stamps. Next to me on the table this evening are “Forever” stamps depicting ocean-going ships. What miracles these beautiful stamps promise—and deliver!

"Forever"! Can it be, David and I ask one another in horror, that our country will one day no longer have a government postal service? Some people think that would be best. Some people think the government should do nothing but wither away. Funny, that was the dream and promise of communism, wasn’t it? The government would wither away, and the people would live in happy, perfect anarchy. Seems to me that libertarians and communists have a lot in common in dreaming of society without government rules or services. As is so often the case, I find myself on the shrinking middle ground, an island fast diminishing in size as political currents eat away at it from both sides.

You won’t know what you’ve got until you lose it. Give that some serious thought. Maybe the first letters we write and mail today should go to representatives in Congress to tell them we love the United States Postal Service.

In case anyone is wondering about that book shipped to Queensland, here's the answer:

"Yes it has arrived, thank you. Denise's brother was very happy with the book, we even found an old produce receipt inside.

"Again thanks Pamela, can't sing your praises enough. We recommend your store to anyone.

Thank you, Scott and Denise, and thank you, United States Postal Service!

"You don't know what you've got till it's gone. Pave paradise and put up a parking lot..." Another lyric that seems relevant.

On the other hand, I know from experience if we write paper letters to Congress it will be weeks before they actually are read by the staff of the representative...because of the scares that arrived through the mail years ago there's a whole process that paper mail has to go through...plus the normal bureaucracy of getting anything heard, no matter the format, in government today.

Dawn, you are not cheering me up! But there is a lot of news that is just not cheerful, isn't there? What would we do without our dogs?!

Every summer my daughter's favorite "job" is to walk downtown and get the mail. She and John even share a birthday, so they always have a nice conversation.

Going to the post office has always been a pleasure for me, except for one faraway p.o. which shall remain nameless. Not Paris, either (perhaps surprisingly) Even there, once I figured out the system, it was something I could enjoy. In fact, I once helped an elderly Parisian woman who was having trouble understanding what the clerk was telling her. That made my day!

Sharing a birthday with someone is fun, too.

Unions are a big part of it, as the postal service can't pay for the real value of the work.

I'm not sure what you're saying, dmarks. Do you mean the postal service overpays...or underpays...of something else entirely??? It is not the union that requires insurance and pension funds for postal workers--and ONLY postal workers--to be funded so far into the future that the workforce and hours must be slashed to make up for the cost. And if I understand the situation correctly, these prefunded accounts are not held somewhere in escrow to serve their stated future purpose but are being used to fund other government (nonpostal) deficits. And if that is correct, then it seems the government is milking the self-supporting postal service like a cash cow. So what happens if they kill it? Cash cow, golden goose--kill it, and you kill the revenue stream. Short-term desperate measures make for lousy decisions.

I was referring to how public-sector unions have a rather detrimental effect on government agencies and their critical missions. Both FDR and private sector labor great George Meany opposed them.

Or you get situations where a scohol bus driver was caught assaulting helpless special needs students on the bus in wheelchairs. The school tried to fire the person, but the union stood by the bully and made sure she got a long paid vacation.

In your second paragraph above, dmarks, second sentence, I think you mean "The public sector ones wage war on the public." I think I see your point. If unions are, let us say, a force by which a certain segment of the public can protect itself against powerful private interests, in the case of government workers we have a sector of the public as an adversary of the greater public. Is this a fair restatement? If so, I understand your point but am not convinced that the problems we see in education, public services and infrastructure are all the result of out-of-control public-sector unions. One problem comes with anecdotal evidence. (Weird horror stories can be brought in to support any position on any subject.) Another problem is that neither correlation nor chronological sequence establishes cause and effect, although both are often taken to do just that.