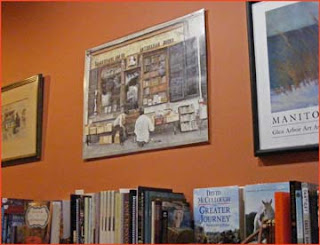 The poster of Shakespeare and Company on my wall on Dog Ears Books was purchased for me from a friend on his first trip to Paris, and he went to a great deal of trouble to get it back to Northport. Only when we took it out of the tube and inspected it thoroughly did the two of us see that the poster had been printed in someplace like Wichita, Kansas. (I’m not taking it off the wall to check, but it was definitely “someplace like” Wichita.) It didn’t matter. It was Paris, it was an iconic bookstore, and the poster was a lovely gift that I still enjoy on a daily basis. 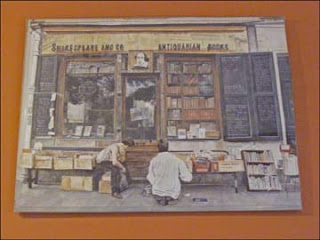 Every American who visits Paris must pay respects to Shakespeare and Company. Many of those who do so are under the illusion that they are visiting Sylvia Beach’s historic bookstore, famous before World War II for welcoming the likes of James Joyce, Gertrude Stein, Hemingway, Ezra Pound and others. George Whitman’s store, opened in 1948, took its name from that of its illustrious predecessor (on a different street in the Left Bank); more importantly, Whitman followed in the tradition of Beach, welcoming writers and readers of English from all over the world. Many a hopeful, struggling writer spent the night—or even several weeks—on a sofa tucked away somewhere in Shakespeare and Company, and many well-known Beat writers, including Ted Joans, Jack Kerouac, Lawrence Ferlinghetti and Allen Ginsberg, were associated at one time or another with George Whitman.

Whitman’s bookshop was not one of my regular Paris hangouts. Since English is my native language and not something I have to seek out, when in Paris (it’s been over eleven years now since my last visit) or francophone Canada, I can never get enough of hearing and speaking and reading French, and immersion in that language is my first priority. Still--of course!--I had to see what Shakespeare and Company was all about. 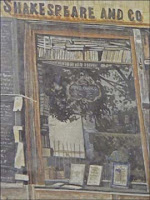 Picture a perfect May day, the bookshop door standing open to the morning sun and just inside, tables piled high with books. The proprietor and a young Asian woman were deep in conversation, in French, and I lingered beside one of the tables, picking up and leafing through books, unobtrusively (I hoped) eavesdropping on their conversation. She wanted to be a writer, had written some stories, wanted him to read them--could he possibly take the time? She would appreciate it so much! What he really wanted, he told her, was for her to keep a journal for him, to confide to its pages all the details of her life, particularly her love life, omitting nothing. In that way, he said, he could judge whether or not she had it in her to become a writer. The conversation held me like a spell. The young woman objected. She resisted. Her words are etched in my memory: “C’est un peu—exigeant, n’est-ce pas?” Yes, I too thought he was asking a bit much! Did he ever read any of her work? Did she begin a journal to satisfy him? Who knows?

My artist husband also visited Shakespeare and Company on his first trip to Paris. It may have been there that he met poet Ted Joans, who invited David to come visit him at home in Timbuktu. --Okay, I checked with David on this, and it was George Whitman who introduced him to Ted Joans but not actually in the bookstore—George steered David down the street to a little park, saying there was someone he had to meet. They met a few times afterward at tea in George’s apartment and got together at a cafe once or twice, too, but David never made the trip to Timbuktu.

George Whitman died on December 14 at the age of 98 in his apartment above the bookstore. Sixty years of bookselling in Paris, France--quite a life for a boy from Massachusetts. His daughter, Sylvia Whitman (31), carries on. Thank heaven! It would be a tragedy if the iconic name Shakespeare and Company were ever to vanish from the City of Light. 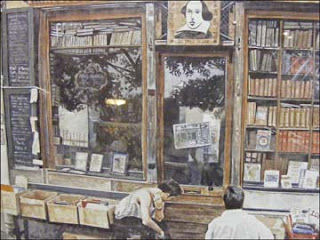 P.S. I drafted this post last night at home but waited to get to the bookstore this morning and snap the poster before uploading. I mention this because it means I'm hitting the "publish" while enjoying a flaky Four Bean Rows almond croissant from Brew North across Waukazoo Street, my croissant the perfect accompaniment to memories of Paris.
Posted by P. J. Grath at 5:22 PM

What an interesting post! And George certainly was an interesting person. Would be fun to read more about him...I'm sure there is more to read. Just the little bit over on the link was fascinating.

Here’s another of David’s memories: He was browsing through the store—all the delightful little nooks and crannies crammed with overflowing bookshelves and little narrow beds and cozy chairs—and a woman who was working there mentioned to him that George had a “bad habit” of tucking money inside books, so if David found any money in a book he should please return it to the desk downstairs. The entire business ran on trust and in very unbusinesslike ways sometimes. George, a lifelong socialist, was very proud of that.

That was an excellent read - nice job with the photos, too. I wonder if George named his daughter after Sylvia Beach.

I wonder what it would have been like to visit Ted Joans in Timbuktu.

I wonder how I managed to visit Northport without having an almond croissant at Brew North.

I am full of wonder.

Sylvia Whitman must be named after Sylvia Beach, don't you think? David said that traveling to Timbuktu sounded terribly complicated. I don't think he seriously considered the trip.

Croissants, almond and otherwise, arrive fresh at Brew North on Fridays only during the winter. You might want to make a note for future reference, Gerry. And others, too, of course.

Soooo . . . early one Friday morning I should wake up and say, "Road trip!" - is that it? Sounds good to me. Very good indeed.

Sometimes there are croissants left on Saturday, but I like mine still crispy on the outside, especially on the ends, and after 24 hours under the glass dome of a cake stand, they become rather flaccid.