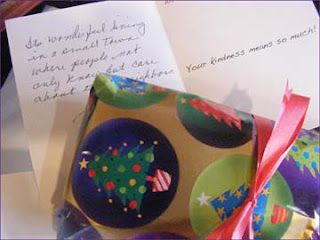 Here’s a story that began a week ago Saturday. The “Best for Kids” sale at the Willowbrook was over, and David and I were moving boxes of books back to the car to return to the bookstore. As we walked across Mill Street in the rain, David saw something on the wet pavement and bent to pick it up. “It’s someone’s credit card,” he said. We looked at the name. “I know those people,” I told him. “They’re customers of mine.”

Back at the bookstore I looked in my files and found a card with their name on it in my trade credit file (they bring in used books and get a 50% discount on used books they buy from my store as long as their credit lasts), but there was no phone number on the card. They weren’t in the phone book, either. Their credit card from Huntington bank, so David said he’d drop it in the Huntington night deposit box.

But I kept thinking that I should know their neighborhood and some of their neighbors. Were they Cathead Bay people or Omena people? I decided to try Omena and called a friend to leave a message, along these lines: “Do you know these people? Do they live near you? If you have their phone number, would you please tell them that we found their credit card and they can pick it up at the bank?”

Late in the evening the man whose name was on the credit card called our house. Had he gotten the message from Judy? Yes, he said, and from Joan, also. (Judy had called Joan to pass it along.) He and his wife were laughing happily, and he said, “This is what I love about living in a small town!”

Today I came to Northport to find a little package and a card on the counter, dropped off yesterday when Bruce was at the store. The card reads, “It’s wonderful living in a small town where people not only know but care about their neighbors. Your kindness means so much!”

I haven’t opened the package yet. It’s to David and me. It is fun living and working in a small town! 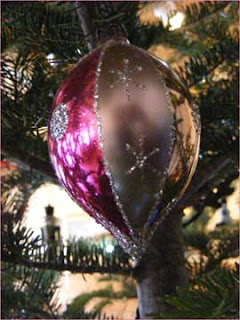 This was a nice story to read to Ben before sending him off on a rainy morning to see a client. Thanks for warming our hearts.

Bettie, I'm glad you were able to share the story with Ben. I forget to put in it the man's remark on the phone that the books his wife bought from me would be even more meaningful now.

Dawn, I've had some very positive experiences and met very helpful people in cities not famous for being outgoing to strangers (Cincinnati, New York, Paris). We don't hear such small news items from big cities very often, but you are right--people can be surprisingly wonderful anywhere. Not that I think David and I were so "wonderful"! It just made sense to make the small effort.

This is the sweetest story! The absolute sweetest...I have tears in my eyes. This, in my mind, is why the world is rich when there is spirituality. However, I'm not even good at debating the word "spirituality" so I won't touch the religion blog with a ten foot pole!

Glad you liked my little story, Kathy. It's a true story, and it was time for me to post something lighter than the--well, you mentioned it already. Merry Christmas!