Tonight at sunset begins the festival of Hanukkah, or Chanukah. Here is an article that appeared in the Traverse City Record-Eagle in 2004, which I chose over others because it quotes our own Rabbi Bahle of Suttons Bay. She tells us that the word for the holiday means dedication and suggests that it’s a good time of year to dedicate ourselves to important, positive ways of treating one another. Who could argue against that? Another man quoted in the article (in case you don’t follow the link and read the whole thing, I’m telling you) says the story of Hanukkah is “one of hope, prevailing against difficult odds, and sticking together.” That’s good, too, yes? 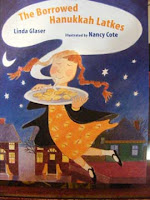 One of the new books I ordered this season after combing through various catalogs and lists was The Borrowed Hanukkah Latkes, by Linda Glaser, illustrated by Nancy Cote. The story actually takes place on the last night of Hanukkah, when Rachel’s mother is making latkes and gets a call that more relatives are coming. There won’t be enough latkes, and there aren’t enough potatoes to make more, so Rachel volunteers to borrow more potatoes from a neighbor. Rachel wants Mrs. Greenberg to join them for dinner, but Rachel’s mother says Mrs. Greenberg will say no. “She thinks she’d be a bother. She’s as stubborn as an ox.” Sure enough, Rachel’s mother was right.

But then Mama needs eggs, and again Rachel runs next door to borrow and to invite. “Borrow? Don’t borrow. Use them in good health,” Mrs. Greenberg says generously. But she still won’t come to dinner.

Even when Rachel goes back to borrow chairs, she can’t persuade Mrs. Greenberg to come to dinner. But Rachel is stubborn, too—and clever. I won’t spoil the surprise by giving away the happy conclusion.

May your candle and any mitzvah you perform tonight shine brightly against the darkness.

I can see yours from across Grand Traverse Bay, Gerry! Happy Hanukkah!

YOU shine against the darkness, Pamela!

Gerry and Helen, you are both too kind. I am honored to call you my friends!