Waves of Weather and Thought 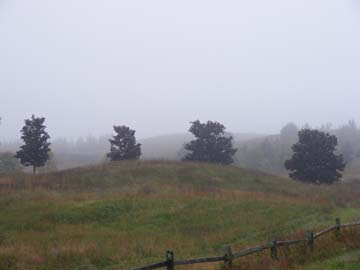 Most of Thursday the rain poured down. It was a wild day, off and on. In fact, I had quite the little bookstore crowd in the early afternoon when the power went out from the Bight through Cherry Home, and several friends came to enjoy light and coffee. Fortunately for Sarah and me, the rain let up at bookstore closing time, so we were able to spend some time outdoors without getting completely soaked. Fog clothed everyday scenes in thrilling mystery. At least, the look of the fields and forests was thrilling and mysterious to me. Sarah took it in stride. I did notice that her nose found certain spots quite mesmerizing. Did the fog concentrate scents where other animals had been? 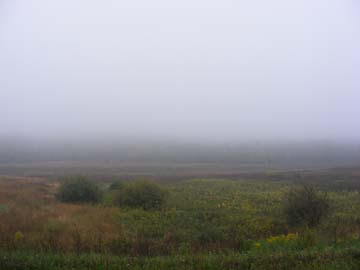 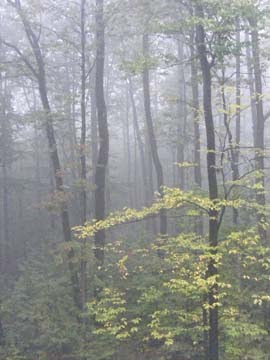 Back to my current reading--

We learned from our parents. We learned from our grandparents. Since everyone was directly involved in the economic success of the family unit, we felt directly a part of not only the family but all of society. At six or seven years old in 1930, you were expected to help on the farm. In 2010, children tend to be less needed for work, and thus not connected directly to their parents’ livelihood. Progress has made life more convenient. Yet, somehow, people are less connected.

This is the rural culture alluded to in yesterday’s post about Dean’s memoir, and it reminds me forcibly of the novels and essays of Wendell Berry and the kind of strong family and community interdependence he remembers and espouses, which he sees still in Amish culture. It’s easy for outsiders to romanticize the Amish and for those of us in the 21st century to romanticize an arduous past we did not have to live, but it’s not easy to deny that something important has been lost to most Americans since 1930s. We are connected, some of us almost constantly, by cell phones, electronic text messages and e-mail, but what kind of connection is it? There is a strong, very important psychological component, I would say. The fact that we reveal ourselves and sympathize with each other and try to counsel and advise and support is hugely important. There is undoubtedly more of this individual recognition now than there was in pre-WWII rural communities, and who would want to give it up? Not I. But the truth is that most of us do not depend on each other economically, in any immediate sense.

David and I watched a movie last night that is one of the best movies I’ve ever seen. “Temple Grandin” was an HBO dramatic presentation of the life of the Colorado State University Animal Science professor, designer of livestock handling facilities and author of several books, including Animals Make Us Human. Dr. Grandin is as well known for being autistic as she is for being a writer and a scientist. The film was somewhat long, but David and I didn’t mind a bit; in fact, both of us were rather afraid it would end with Temple’s college graduation, and we were delighted to see the story continue into her post-graduate education, research and career.

After the movie was over and then again this morning as soon as I was awake, I returned to my reading of Dean Robb’s life. His entrance into the University of Illinois as a freshman was so startling I don’t want to quote from that section at all and ruin the surprise for future readers. I’ve now reached Chapter 10 and Dean’s beginning days as a lawyer in Detroit.

The problem with law is that you rarely choose your case. Lawyers do not simply find an injustice in the legal system and then take up the cause. There must be an injustice plus a client who has suffered because of it.

So many lives, some lived in parallel, others intersecting. Dean Robb’s contributions in the fields of civil rights, personal injury and criminal defense have touched many, many lives. Temple Grandin’s work in livestock facilities has improved the lot of animals raised for meat, but her influence has been wider than that, thanks to her books. Both have been and continue to be role models, heroes for the rest of us. 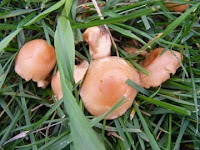 The rain has brought out all sorts of mushrooms. I couldn’t decide whether to think of this group as a chorus line or a big, fungical smile. The spelling checker doesn't think 'fungical' is a word, but you know exactly what I mean, don't you? 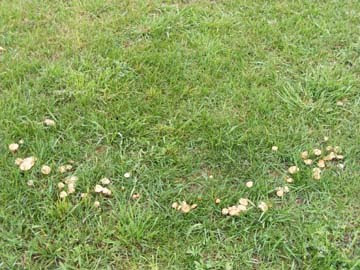 Just love that first photo! Sounds like a great movie!

Thanks, Dawn. I liked the spacing of those trees in the top photo. They're those maples with the dark red leaves, not my favorite maple, but with all colors muted on a foggy day I liked the way they looked. It was a toss-up, actually, whether to post this shot on my other blog (A Shot in the Light) or the one I ended up choosing, only because it gave more a sense of my late-day slow walk.

See the movie and let me know what you think. I don't often see a movie that moves me as this one did. Have you read her books?

I, too, am intrigued by the movie. We certainly did have some rain and fog around here as well. Seems like autumn arrived in a deluge! Your photos are very nice; fog does have that tendency to "clothe everyday scenes in thrilling mystery". Except, as I always say, when we're driving in it. Not so thrilling.

Commuting or traveling long distances in fog would hardly be anyone's choice, Kathy, but I have to admit that David and I often go out for country drives when there's a nice fog. David calls it "getting some of that Japanese landscape look."

Yes, it's fall! It's Homecoming today in Northport, and those girls in their beautiful dresses riding in convertibles looked pretty cold!

I am a sucker for foggy days. It's the only time the world seems to comport with my inner landscape.

Temple Grandin is a most interesting person. Now another reason to subscribe to Netflix, eh?

How would you describe your inner landscape other than "foggy"? I love the illusion of time standing still that fog brings. Also the peacefulness.

Am reading on in Dean Robb's life story. Reading about Martin Luther King, Jr., and civil rights work in the South was inspiring. How wonderful it was that black and white Americans joined together peacefully to bring about a fairer society--though we still have a long way to go.

I love the first photo as well. The pictures of the UP are great too! I will make sure to stop on over here more often! :)

Anishinaabekwe, it's great to have you visit. I'll be visiting your site regularly, too, and encourage others to take a look, also.