Another Idea for Green Tomatoes

They had been sitting out on the table on the porch for weeks, not turning red. A couple turned a weak, pale orange, but the rest remained green and hard. Finally David asked if he could throw them into the compost pile. Tomatoes from our garden—toss them out??? “No, I’ll deal with them tonight,” I promised. So after dinner, as he was leaving for his studio and I was settling into my reading chair with a good book, he stuck his head back in the door to remind me that the tomatoes were waiting. Drat!

The good news was that I found a recipe for something called Green Tomato Mincemeat in that old stand-by, can't-live-without-it book, Putting Food By (1973). The bad news was that the recipe assumed the cook would be (1) making a huge batch of the stuff and (2) canning it. I just wanted to get the job done, not perform math (to cut the recipe down to the small number of green tomatoes on hand), so, I winged it and measured nothing. Chopped the tomatoes. Chopped up an apple. Found what looked like enough raisins. Got out the apple cider vinegar, the last of some apple syrup I was tired of seeing in the cupboard, cinnamon and (since I didn’t seem to have the other spices called for) “pumpkin pie spice.” Got it all simmering in the double boiler and sat down with my book at last. Before we went to bed, green tomato mincemeat was resting in the refrigerator.

On Halloween, when I got home earlier than David and our houseguest, I thought I’d make a green tomato mincemeat pie. My first impulse was to make regular piecrust, but then I noticed the store-bought graham cracker crust I’d bought weeks before, for some reason (I’m sure there was a reason), and never used. Feeling lazy and guilty, I quickly shifted to Plan B: store-bought crust and streusel topping with rolled oats, brown sugar, etc. Was this cheating? 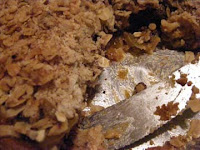 Next, these chestnuts must be dealt with, but Thanksgiving isn’t that far in the future, and nothing says Thanksgiving like cream of chestnut soup. 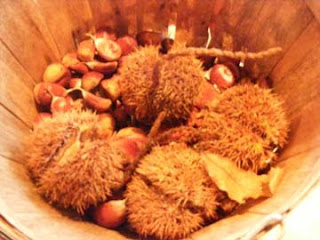 My ears are pinned back in wonder and amazement. Green Tomato Mincemeat Pie in Graham Cracker Crust with Streusel Topping. And cheese.

Wow. Sounds great! Hope I can come close to duplicating.

Pineapple? Scalloped pineapple? Are you making that up, Gerry?

You are both kind to see past my poor picture. I should have photographed a slice of pie with a slice of aged cheddar. A good "food stylist" would have done it that way, I'm sure.

Anonymous (which one?), a regular crust would be just as good, I think. It's the cheddar as counterpoint that makes the dessert--or breakfast, as the case may be.

Mmmm...sounds great. I'm jealous of your chestnuts--the only ones around here are horse chestnuts.

Thanks for your comment on my blog. You're right--all I want to do is snuggle that cute baby! She has other plans though; she does NOT like to be snuggled. She's too busy!

I like to use horse chestnuts as substitutes for worry stones. They are good to handle. The chestnuts were a gift from a friend. Our only nut tree is a black walnut, and it's so much trouble dealing with black walnuts that I'm happy for a year with only a few on the ground. A bumper crop--ugh! work!

Your baby reminded me of what my stepdaughter said when her first son was born. She was torn between looking at him and kissing him, because when she was only looking she couldn't be kissing, but to kiss him she had to give up looking at him. Your Lucy is that cute!