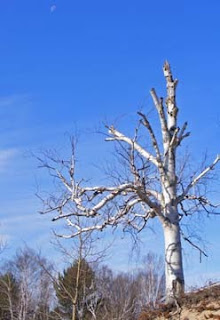 Good friends from downstate drove north for their first visit of the year, long overdue, and were delighted by the balmy weekend weather. We have a tradition with this family (however many of them visit) of exchanging books and recommendations, so I instructed Majda to read herself to sleep with Palmer Brown’s The Silver Nutmeg and take home Q Road, by Bonnie Jo Campbell, to share with her father. Michael showered us with an embarrassment of book gifts. Among our loot was Waverly Root’s The Food of France, just the book to open after a long, leisurely dinner (smoked salmon, pumpkin soup, chicken stew, orange and leek salad, dark chocolate with almonds), of which I had to prepare only the soup, as Michael and Majda did the rest.

The weather held, with Sunday morning dawning clear and bright. Sarah had two walks, an early one with Michael and one a little later with me. Then, after another leisurely meal featuring Virginia bacon, French toast made with Italian bread, real maple syrup, and lots and lots of fresh coffee (my turn to cook and serve), our guests suggested a longer walk. “Where could we go?” they asked. Nearby Houdek Dunes, so fresh in my mind after Monday’s excursion with other friends, beckoned alluringly on such a bright, sunny morning. 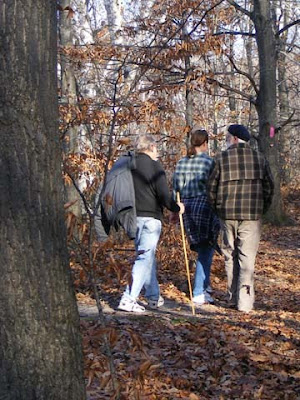 We hiked both loops of the trail (will David ever forgive me?) and then continued our tour of northern Leelanau County with a cruise over to Peshawbestown, through Omena and north to Kilchermans’ antique apple farm. I could not resist Wolf River apples--five will make a big pie--or one sweet little Pink Pearl to eat immediately. (It was a delicious little apple! To my surprise, I found that the flesh was pinker than the skin.) John Kilcherman enjoyed showing his bottle collection to David and Michael while Majda chose eating apples for their return trip to Hastings. 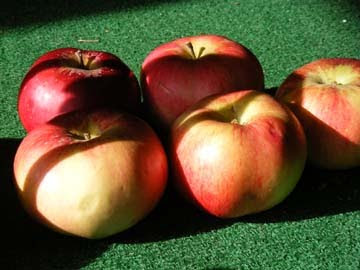 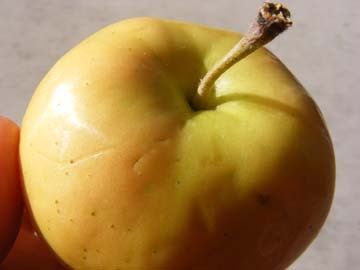 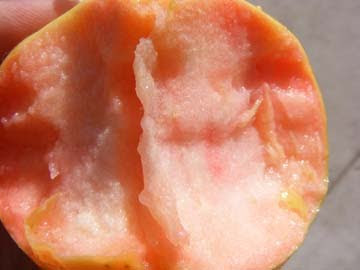 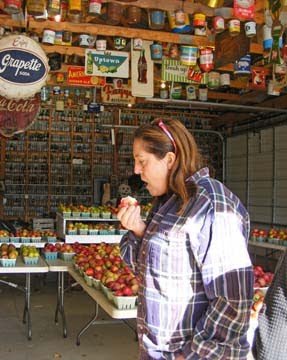 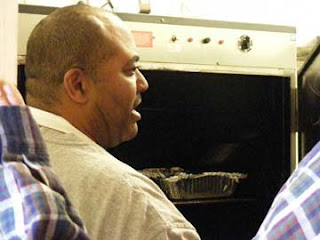 A stop at the Drive-Thru BBQ on our way back through Northport gave Michael a chance to learn about that business from manager George Twine, my genial business neighbor. Our buildings are next-door to one another, and that’s nice for both of us. I learned (now, will I be able to remember?) that while most of George’s BBQ items are Texas-style, the pulled pork is prepared à la North Carolina. Drive-Thru is now offering chicken dinners for four for $20, by the way. You get two pieces of chicken each, green beans, mashed potatoes and gravy. Such a deal!

Back at the casa, Michael and Majda had no sooner driven out the driveway than we found a message from our next guest, saying he needed to be picked up in Traverse City. Thad Koza will be with us for a couple of days, giving a presentation on “tall ships” (traditional large sailing vessels that have an educational component to their existence) to members of the Maritime Heritage Alliance. It is Thad’s beautiful tall ships calendar for 2010 that I have for sale at Dog Ears Books.

Thad claimed that he had brought the good weather with him. Hmmm. Maybe he sent it ahead so that it would arrive before he did? Well, however it got here, wherever it came from, we were glad to have it. We will all sleep well tonight after so much fresh air and exercise. 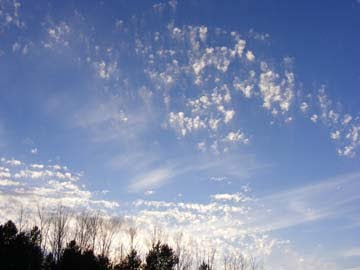 And wasn't it a fine day, though! And didn't those pretty silver cloudlets turn a lovely shade of pink and gold, and isn't it grand to spend a golden afternoon with good friends? AND pumpkin soup!

Can't beat a day like that! Such a wonderful place you live in!

I think I missed them turning pink and gold. I was either cutting back Siberian iris (which never did get divided this year) or starting supper. But it was another lovely morning, day and evening, for sure. As for the pumpkin soup, I almost added a P.S. but didn't, so here it is now: Saturday night I made the soup with yogurt, last night with soy milk, and the latter version was much smoother and tastier. Pumpkin, vegetable broth, onion and garlic sauteed in olive oil, plenty of cumin and curry, as little kosher salt, a little honey.

What a lovely weekend visit with friends. this is a most delicious post! I am glad you shared it with us.

Our third guest arrived as the others were leaving and departed this evening before my ULYSSES study group arrived. Now it's 9:30 Tuesday evening, and the household is back down to our pack of three. Lots of laundry and resting to do, and we'll be as good as new and ready for the next round.