Pictures and Poems for Kids

It may have been the new book called Everything I Need to Know I Learned from a Children’s Book (a truly marvelous and fun-to-read book for all readers who got their start in childhood, despite its almost unbearably sappy title) that got me to thinking once again about Robert Louis Stevenson and A Child’s Garden of Verses, mentioned briefly here (I always want to say “in these pages,” which tells you where my heart is) not long ago. After sharing my idea about collecting different old editions of this classic, illustrated by different artists, I looked to see what is available from one of my new book distributors and ordered two versions. They are a study in contrast. First, one is twice the size of the other—that is, the smaller one would fit sideways twice on the front cover of the larger book. Here are the two of them: 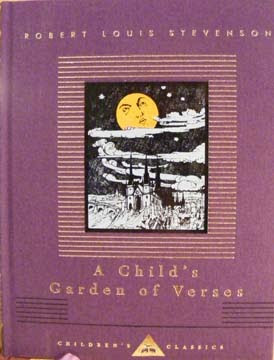 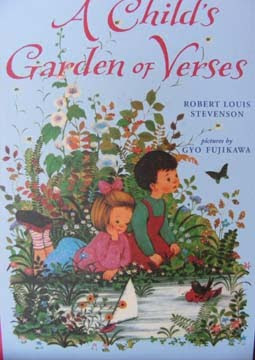 The larger version has “pictures by Gyo Fujikawa” and was first published in 1969, while the smaller is from Knopf’s Everyman’s Library Children’s Classics and features Charles Robinson’s illustrations; this version was first published in 1885. As you might guess, the style of illustration is very different from one to the other. Here are the two books, side by side, open to the same poem, “Wintertime.” 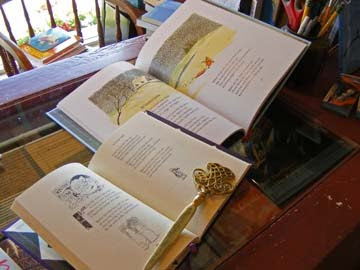 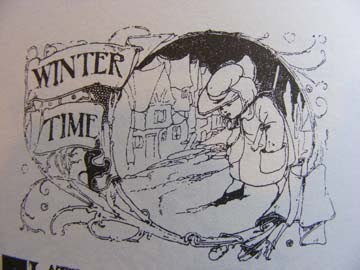 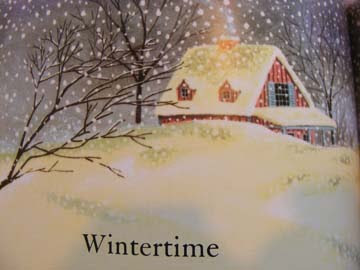 Do you want to read the poem, too? Here is the first stanza:

Late lies the wintry sun abed,
A frosty, fiery sleepyhead;
Blinks but an hour or two; and then,
A blood-red orange, sets again.

I don’t think this poem made it into my Little Golden edition of ACGOV. I don’t remember it, at any rate. I do remember many others, among them “The Swing”:

How do you like to go up in a swing,
Up in the air so blue?
Oh, I do think it the pleasantest thing
Ever a child can do!

So did I, especially the when it was the tire swing hung from long ropes in an old, standard-size apple tree in my grandfather’s backyard. The child in Stevenson’s poem can see “over the wall,” and I could see over the tall board fence as

My recommendation on these two illustrated versions is that grownups will like the size and style of the classic, but younger children will probably be happier with the big pages and bright colors of Fujikawa’s pictures. Very modern and very young children probably to start with something much easier, something like Lois Ehlert’s Oodles of Animals. Here’s an example of the fun from this colorful book:

Swimming and sunning,
a crocodile’s happy.
But when he meets humans,
he tends to get snappy.

Everything I Need to Know I Learned from a Children’s Book is probably not only a wonderful trip down Memory Lane for adults but a great way to find books for children and grandchildren.
Posted by P. J. Grath at 8:23 AM

Can we have, please, the wonderful rag papers of long ago - the ones that lasted forever and felt luxurious and smelled like the library? Just asking.

I'm a sucker for old-fashioned illustrations, and for contemporary ones that are, let us say, "maximalist." I like lots of detail.

Detail--me, too, Gerry. Those pictures you can get lost in for hours on end. As for paper quality, though, there were many books for children and young people (and adults, too) printed on cheap paper in the old days. Beautiful volumes with handmade paper are available today--just very pricey.

I love comparing different versions of the same books with the kids I teach. Your post made me realize I only have one version of this book, and made me want more!

The more I think of this project, Lise, the more fun it seems it will be. I'll mention other versions as I acquire them. Do you like the verses?