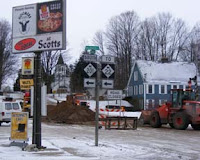 Sewer work, which will go forward for another week, then resume in the spring, won’t get in the way of Saturday evening’s open house at Funky Mama’s and Dog Ears Books (5-9 p.m.). The crews knocked off early today (Thursday) and won’t be back on the job until Monday. Even when streets have been temporarily closed, the inconvenience has been minimal, progress encouraging.

The Christmas tree lights were on today at the T-intersection of Waukazoo and Nagonaba. Presumably they will be unplugged prior to the formal “lighting” at 5 p.m. on Saturday, but making sure ahead of time that all were in working order was a good idea on someone’s part.

My guilty pleasure today (aside from the last of last weekend’s Christmas cookies) is THE WOMAN IN THE DUNES, by Kobo Abe, my intermittent reward for small tasks accomplished. Hailed on the back cover of my Penguin edition as “one of the “premier Japanese novels of the twentieth century,” the novel is certainly Kafkaesque, as has often been noted. The protagonist sets out on holiday and becomes an unwitting prisoner and slave. Because of a stupid letter he left behind and a ridiculous insistence on being mysterious about his destination, no one will know where to look for him or even realize that foul play must have been involved in his disappearance. He has done nothing wrong. His rights have been outrageously violated. Nothing makes any sense. He protests, he struggles, he plots his escape. There is no avoiding the fact, however, that he must dig sand or die.

The sand is omnipresent:

“Because winds and water currents flow over the land, the formation of sand is unavoidable. As long as the winds blew, the rivers flowed, and the seas stirred, sand would be born grain by grain from the earth, and like a living being it would creep everywhere. The sands never rested. Gently but surely they invaded and destroyed the surface of the earth.”

Like an ant-lion waiting in its trap for heedless ants, the woman at the bottom of the sand pit into which the amateur entomologist is lowered (for what he thinks will be one night’s lodging) greets his arrival with scarcely disguised pleasure, but he soon realizes that the sand itself is their captor, the woman as helplessly trapped as he, both of them dependant on villagers above the pit for the very water that keeps them alive.

More than in the writings of Kafka or Camus, physicality plays an unrelenting role in the story. I am reminded of the repugnance Sartre felt for the physical world: Abe’s awareness is as keen, without the nauseated rejection. Perspiration, urination, skin rashes, itching, mucous, saliva, skin (“soft, downlike bandage for the soul”) appear on almost every page.

Is Niki Jumpei an Everyman, the author’s message that we are all hapless insects trapped in a demeaning struggle for our brief, meaningless existence? One reviewer, David Mitchell, puts the question this way: Is this a story of salvation or damnation? I am two-thirds of the way through the book and not about to skip to the last page, but I doubt the last sentence would give a clear answer to the question, anyway.

Over and over, too, our Michigan dunes come into my mind--the difficulty of the dune climb at Sleeping Bear, the sand’s “angle of repose,” the “ghost forests” of giant buried trees, ant-lions and wolf spiders, Pitcher’s thistles, the fragility of dunes (despite the strength of sand and wind) and their vulnerability to erosion. What would Abe’s images of migrating dunes mean to me if I had lived my whole life in forested hills deep in the continent, away from the Great Lakes shore?
Posted by P. J. Grath at 1:34 PM