Through a Glass, Dreamily 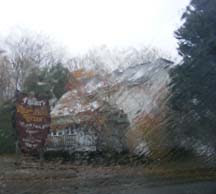 My morning drive to Northport was made interesting by virtue of light rain. Traffic was nonexistent. I was able to stay under 40 mph and leave the wiper speed on low. Pulling off the road for a minute, I captured this impressionistic view of Fischer’s Happy Hour Tavern through the rain-streaked windshield.

Now, unprepared with new thoughts this evening, I’m pleased to have rediscovered the commentary on Kipling I thought was lost forever, and here it is:

Another family member writes, “What's up with those people who read the last page of the book first? I know lots of people who do, but it wouldn't occur to me in a million years to want to do that.” Me, either, Maiya. What’s up with that, indeed? But, well….

When I couldn’t sleep the other night, I got up to read for a while and picked up a strange little novel by Rudyard Kipling. In childhood I loved The Jungle Books (which my father and I read together over and over), but how different an author can appear at different stages of a reader’s life and when a different book is in question! THE LIGHT THAT FAILED is a rather horrid little story, I must say.

It begins with two unhappy children, unrelated orphans being raised by the same dreadful woman. The children buy a handgun, and the reader thinks murder is at hand, but no…. Then we skip ahead many years and find the young man on the banks of the Nile, determined to make his way as an artist by first becoming a wartime newspaper illustrator.

Later, back in London, Dick finally recognizes at last that he must be true to Art and not sell his soul for easy popularity. How does he come to see this? By running into Maisie, the companion of his childhood, also determined to be a painter, also focused blindly (as it were) on Success, as he was up to that point.

Well, Dick and Maisie do not make a pair, because she will not. When he goes literally blind, however, a friend of his travels to France, where Maisie has gone to study painting, and brings her back to nurse the man who loves her. But that doesn’t work, either. She is too selfish and runs off without even bidding him a proper farewell.

Backtrack to another woman, hired as Dick’s model, who set her cap for the artist’s best friend and mentor/benefactor. Dick foils the plan, but the woman reappears later to destroy the last masterpiece Dick paints before his eyes give out!

Thus both wickedly selfish women are booted offstage by the author, and Dick dies in his friend’s arms, off on a battlefield somewhere.

Was it a battlefield? Where? I can’t say because, while I did not read the last page of this book first, I did lose patience and skipped several chapters, turning to the last page out of curiosity. Enough!
Posted by P. J. Grath at 3:49 PM