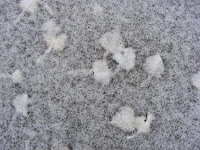 Yesterday morning on the way to Northport, I had in mind a picture of the beech tree at the 90-degree corner where M-201 comes downhill and turns left onto Waukazoo. Turning onto Waukazoo myself, I parked the car and walked around the corner and back up the hill, but the shot I’d mentally visualized wasn’t there. The sidewalk was snow-covered and slippery, footing precarious. I walked carefully, watching every inch of pavement I had to traverse. The image above was my reward. If I’m not too stubbornly focused on what I think I want to see—if I can be open to whatever presents itself--walking with a camera opens my eyes to ephemeral beauties like these cottonwood leaves visible under wet snow in the street.

This is the way I usually approach a library or a bookstore, too. I may go in with a title in mind, but if that book isn’t available, I won’t leave empty-handed, any more than I would leave a potluck dinner hungry because no one had brought, say, Southern fried chicken. Spending as much time as I do in my own bookstore world, there are still days when I browse the shelves and come upon something that wouldn’t have leapt to my mind without the visual stimulus.

Yesterday in the drama section, my browsing turned up “Playboy of the Western World, by Synge. I'd seen the play in high school, but how much could it mean to me then? Now, on the heels of having read THE WILD IRISH (Robin Maxwell) and MY DREAM OF YOU (Nuala O’Faolain), and with documentation of the birth in Fermoy, County Cork, on December 13, 1886, of the grandfather I never met, the play fair jumps into my hand! I begin reading and now, even without actors on a stage in front of me, this place and these people are familiar. I wouldn’t have thought to look for it, but it was a happy accident.

Another book that called my name as my eyes scanned the shelves yesterday afternoon was DINNER AT ANTOINE’S, by Frances Parkinson Keyes. A popular writer from another era, Keyes is an author I know well by name. Seeing her name on a book spine, I told myself I should know her better than that, and here’s the moment come. (One Louisiana book scout comes around every few years, always looking for DINNER AT ANTOINE’S. He says that in New Orleans the demand for this title is constant. Reading it in New Orleans would be, I suppose, like reading ANATOMY OF A MURDER in the U.P.) The story opens in January of 1948. Almost sixty years ago! No time to lose!

Richard Wiseman, author of THE LUCK FACTOR, says his research shows that being open to the world, to whatever is there, to whatever happens, to whomever crosses our path, is an important aspect making up “luck.” He did an experiment to confirm this hunch. He left a 5-pound note (he would have used a $5 bill if he’d been in this country) on the sidewalk outside a café where he’d arranged to meet his subjects, already self-described as either “lucky” or “unlucky.” You might think that the "unlucky" people, trudging along with their heads down and feeling blue, would have been the ones to see the money and pick it up, but not so. Considering oneself “unlucky,” it seems, is not compatible with being open to positive possibilities. The subjects who considered themselves “lucky” were the ones who spotted the note on the ground, time after time.

Good news, both for those who consider themselves “unlucky” and for those of us who need reminders from time to time that good things as well as bad happen in the world, is that learning to be “lucky” is possible. At the end of his book Wiseman gives instructions to his “unlucky” subjects, and sure enough, they come back and report to him that their luck has miraculously changed! What did he have them do? I’ll have to refresh my memory with the book on Monday, but I do recall that one of their assignments was to talk to strangers.

People we don’t know, books we’ve never heard of, and lovely, ephemeral configurations of the natural world have a lot in common, it turns out. At least that’s true from one bookseller’s perspective.
Posted by P. J. Grath at 5:33 AM