Sticking with This One 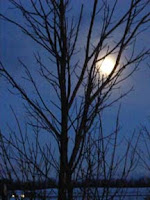 One of these moon images was yesterday’s, taken in the late afternoon on Thanksgiving Day through our friends’ east-facing living room window. The other is the same moon this early evening, caught in the branches of an ash tree along our own driveway.

My resolve to read DINNER AT ANTOINE’S (which I keep wanting to call MY DINNER WITH ANTOINE, confusing the book title with the title of an unrelated movie) was tested severely early on in the story. So many characters introduced, the writing so relentlessly expository! Then the black servants appeared on the scene, selflessly devoted and speaking almost incomprehensible dialect! It was all a bit much, and I was slogging half-heartedly along, thinking how like a soap opera the story was, wondering how much I could stand, when an unexpected suicide caught me by surprise. Well, that’s different! And then an enterprising young police detective announced to a startled family that the death was no suicide but murder! Murder most foul! So then I was hooked and am now halfway through the book.

Turns out my browsing turned up the best Frances Parkinson Keyes title for me. The author wrote many other novels set in New Orleans, all of which make at least passing reference to the restaurant, and all doubtless full of rich local color and fashion, but DINNER AT ANTOINE’S is the only murder mystery she wrote. It’s good light reading for the holidays. Next week will be soon enough to get back to heavier stuff.

Pleasantly busy day at the bookstore today, with lighted, decorated Christmas tree in the window and a cookie table in the corner to welcome friends and shoppers.
Posted by P. J. Grath at 5:00 PM