You Too Can Sleep in a Ghost Town 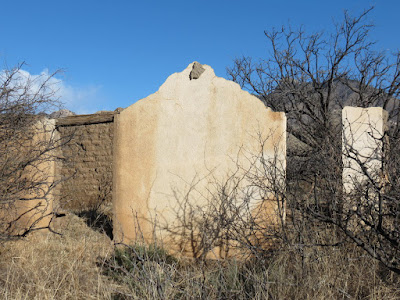 You would not be sleeping in the “old hotel” (ruins above), as neighbors tell us used to stand where only remnants of old adobe walls now stand beside of the winter-dry bed of the Philadelphia Wash. Although I am re-reading The Story of Dos Cabezas, by Phyllis de la Garza, with photos and captions by Carol Wien, I’m still hazy on the exact identity of these particular adobe ruins. Are they what remains of the “Central Hotel,” owned by Mrs. Hicklin or perhaps the house rented by “some ladies” from Henry Goetgens, who apparently did not inquire too closely into their source of income? Phyllis de la Garza also writes that a certain Major Downing, retired military (later murdered by persons unknown in Pinery Canyon), once ordered 20,000 adobe bricks to build a hotel in Dos Cabezas, “convinced that a big mining boom was on its way….” At any rate, whether tourist hotel, miners’ quarters, or “sporting house,” these crumbling walls no longer provide overnight lodging. 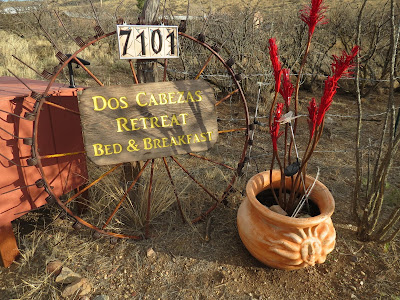 There is, however, a bed-and-breakfast establishment here in the ghost town, combining historic architecture with gracious modern accommodations. I had looked at the website back in 2015, before we ever landed in Dos Cabezas, and this year a social invitation from the proprietors, Sam and Dorothy Laage, gave me a chance at last to satisfy my curiosity. 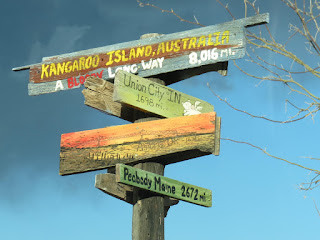 Where, other than Australia, is Kangaroo Island? Very, very far from Dos Cabezas, Arizona, but since my “pen pal” in Australia, Kathy, also operates a bed-and-breakfast — hers in rural New South Wales — I’m posting this photo with the sign especially for her. Both Arizona and New South Wales are “Lands of Little Rain,” with thirsty cattle and red earth…. 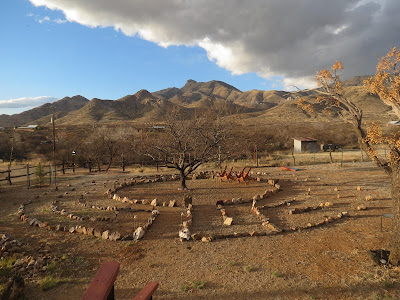 A labyrinth at the B&B in Dos Cabezas invites participation along with meditation: guests may pick up stones at the entrance and add them to the farther reaches. 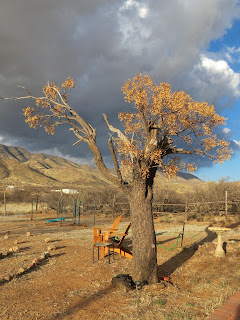 I have to admit, though, that I noticed the chinaberry tree before the labyrinth caught my eye. Not sure what it is about me and chinaberry trees, but this one, I think, would command anyone’s attention: over a hundred years old, it has long stood a mute witness to the full panoply of human behavior, and the present owners of the property are doing all they can to insure its continued life. Think what conversations this old tree might have overheard in more than a century. 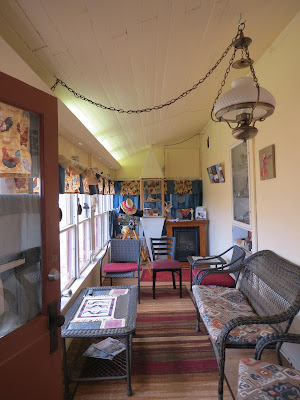 What corresponds (in my mind, if nowhere else) to the front porch of our old farmhouse back in Michigan is called the “Arizona Room” (above). It is a long enclosed but unheated porch that faces north across the labyrinth to one of the twin peaks of the mountains that give the ghost town its name. Knowing where to look, I can spot our cabin through the branches of another tree (I forgot to ask what species) that provides privacy to the Arizona Room from the highway. Th Arizona Room was added to the original adobe structure in about 1905.

Thomas Newton McCauley, a reputed business “genius” from Illinois who had come West both for his health and in hopes of making another fortune, entertained visitors here, in hopes of impressing them with the future of the Mascot Mine and selling them shares in the venture at $10 a share. I first read the history of mining in Dos Cabezas three years ago. Being in a building dating back to the ghost town’s boom days, however, make the historical details of that time much more vivid. 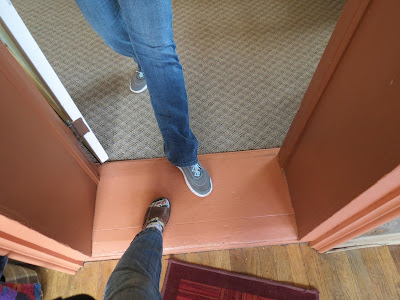 How thick were the original adobe walls? The doorsill between the Arizona Room and the Community Room tells that story. Dorothy and I stopped to add our feet to the photo for scale, and then we stepped back another quarter-century into the oldest part of the building, called the “Community Room.” 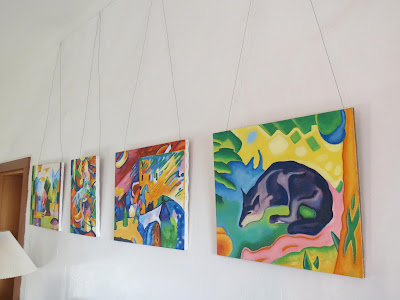 The paintings on the walls of the Community Room were done by self-taught artist Mary Laage, Sam’s aunt, from Carmel, CA. “Bohemian Carmel,” adds Dorothy. I loved the vivid colors and lively composition of the paintings and was happy to hear the Artist praising them to our hostess. There is a fireplace in the Community Room, for evenings when it's too cool to sit out in the Arizona Room, and there are shelves of books and games and other quiet entertainments. Despite the money-grubbing hopes and dreams of those who entertained here long ago, guests staying here now will find they have more than escaped the modern rat race: the old mining rats having long deserted the ghost town for more remunerative locales. The Community Room -- between Arizona Room and bedrooms -- dates back to the 1880s, but life is much more tranquil now. In its heyday, Dos Cabezas boasted saloons and grocery stores, a railroad, a school (by the 1920s “several” schools), and was a stop on the Butterfield Stage Line. These days there would be little traffic at all on Hwy. 186 if not for the Chiricahua National Monument 20-some miles down the road. The word "retreat" in the name Dos Cabezas Retreat is certainly apt. 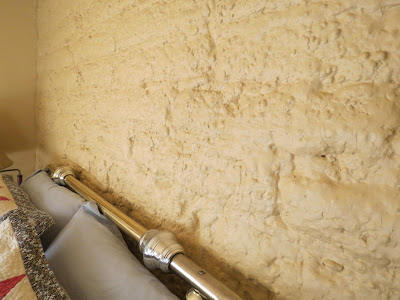 Behind the headboard in one of the two bedrooms is the outside of the original adobe back wall. A recent guest in the smaller bedroom, born in Dos Cabezas, remarked to Dorothy that her great-grandmother had slept in this same bedroom, only the bed was turned 90 degrees now from its placement in her great-grandmother’s time. I cannot even imagine having a family history going back four generations in such an out-of-the-way place as Dos Cabezas — but then, my ancestors were seldom in one place for more than a single generation…. 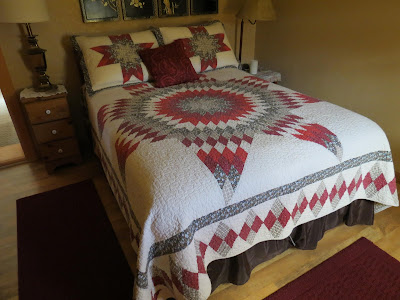 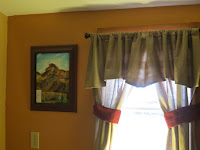 Sam Laage is the chef. He makes breakfast for guests and upon request will also put together picnic lunches. An even more romantic option, though, depending on your preferences, might be the candlelight dinner, prepared and served by Sam in the newly refurbished dining hall behind the building we have just toured. Sam and Dorothy are well acquainted with local wineries, those in Willcox and others down off the Kansas Settlement Road, and I’m sure Sam’s dinners are memorable.

Only one morning this recently past winter did we wake to snowfall, so my last image of the day is hardly characteristic, either of the weather or the B&B across the road, but my sister had been curious about both, so for her I photographed Dos Cabezas Retreat from my uphill vantage point that snowy morning. Don’t let the wintry image scare you, though: you could come to Dos Cabezas for years and never see it looking like this. The only snow you might usually hope to see would be on the highest peaks in the nearby Chiricahua Mountains. And you’ll definitely want to stay at least two nights in Dos Cabezas, so you will have a full day to explore Chiricahua and another evening ghost town to relax in the glow of your mountain memories. 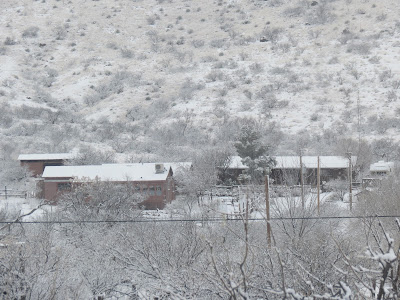 Thank you neighbor for the lovely article of our retreat. One of the reasons we chose to semi-retire to this area was the friendliness of the people. Just like having you and David over, everyone hosts Porch Parties to catch us with the neighbors, enjoy food and wine and watch the sunset. We look forward to spending more time with you in between snowbird guests like you wanting to spend s little time in the high deserts of Southeast Arizona. Glad to have you join our ghost town neighborhood and see the lights on yhe cabin across the hill.

Dorothy, it does make the scattered habitations feel different, now that we've gotten to know more people. (And I already loved it before we met!) Thank you again for your hospitality and deepening my sense of the history of Dos Cabezas. You seem so at home here, it's hard to believe you've been in place only two years. Long may the retreat continue!

Thank you for the tour of the B&B - hope to be there sometime! Looks so inviting and interesting.

You would love it, Deborah. And as you already know from me, the hosts and neighbors are all very cordial!