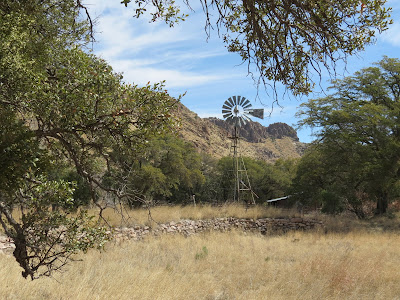 I bought the book Chiricahua Mountains: History and Nature, by William Ascarza (Charleston, SC: Natural History Press, 2014) over at the Southwestern Research Station near Portal, an expedition you haven't heard about yet, but only started reading it after David and I took a picnic lunch over to Faraway Ranch at the Chiricahua National Monument. The deeper one gets into Chiricahua history, the richer every visit to the place becomes. Coincidentally, we had also met a member of the Riggs family a few evenings before at a gathering here in our ghost town neighborhood. On our next drive to Chiricahua, then, we stopped at the Riggs Family Cemetery on the way. 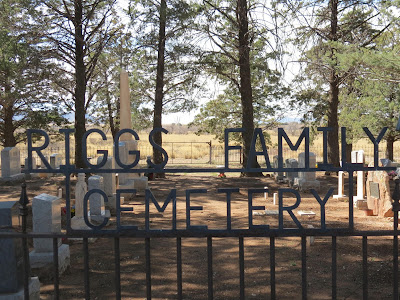 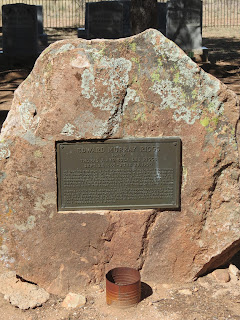 I did not photograph every grave in the cemetery and do not now remember the oldest person buried here, but I'm pretty sure she was 97 and born before the Civil War. My favorite headstone, though, was the one just above, a large natural rock erected on the grave of Edward Murray Riggs, son of Thomas J. and Eula Lee Riggs. Edward lived from 1885 to 1950, and I'll transcribe for you the entire text that appears on his stone, because it tells a lot about why the family is so important in this area, other than their considerable ranching history:

HE GAVE TO THE WORLD THE WONDERLAND OF ROCKS. HE ENGINEERED THE CONSTRUCTION OF ECHO TRAIL. HE WISHED THIS TO BE HIS MONUMENT. HIS CURIOSITY AND LOVE OF NATURE INSPIRED HIS DISCOVERIES. HIS ENTHUSIASM AND TACT ATTRACTED OTHERS TO HIS FIND. HIS TIRELESS EFFORTS OPENED THE AREA TO THE WORLD. WHERE HE BUILT THE FIRST TRAILS, THE TRAILS OF TODAY FOLLOW.

HIS WAS A FAITH THAT LOOKED ACROSS THE RUGGED MOUNTAINS TO THE PLEASANT VALLEYS BEYOND; A GENTLE KINDLINESS LIKE THE WARM SUN ON A SHELTERED SPOT ON THE TRAIL; A REGARD FOR BEAUTY THAT MADE LIFE A PLEASANT VALE; A SKILL AND PERSEVERANCE THAT CONQUERED HIS WORLD.

The Chiricahua Mountains are a most appropriate backdrop for this small jewel of a cemetery. 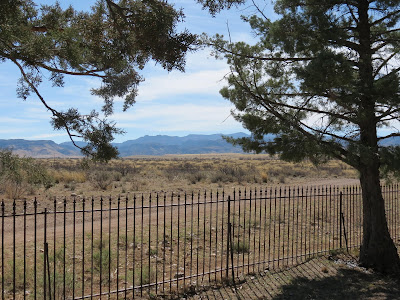 Faraway Ranch itself was the homestead of Neil and Emma Erickson, Swedish immigrants who settled in Bonita Canyon in 1888. Three miles from the the Erickson ranch was that of Brannick Riggs and his wife, and it was Lillian Erickson, daughter of Neil and Emma, who married Ed Riggs, grandson of Brannick. 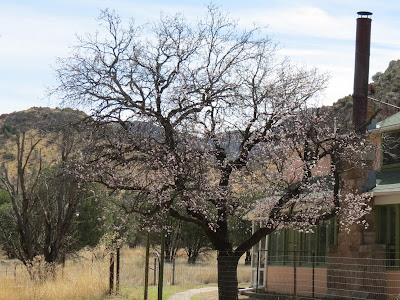 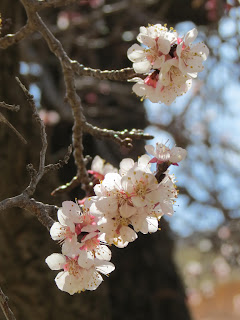 Ed and Lillian operated their property, as had Lillian and her sister previous to the former’s marriage, both as a working cattle ranch (500 head) and as a guest ranch, offering horseback tours through what they called the "Wonderland of Rocks." Chiricahua National Monument was established by President Calvin Coolidge in 1924, largely due to the efforts of Ed Riggs. The National Park Service acquired the Faraway Ranch property in 1979. A more beautiful -- or more remote -- setting for a home can hardly be imagined. Familiarity could never, of this I am sure, breed contempt for Faraway Ranch. Stunning mountains, sheltering trees, gracious home, dear domestic details, and lovely nearby Bonita Creek (not to be confused with the crossroads of Bonita and its creek up in Graham County) insure that every visit will increase love for this exquisite place. Completely content forty miles from Willcox, Lillian Erickson Riggs herself had no desire to live anywhere else. Here are her words, reproduced on a sign on the land she called home:

“The only sure thing, Lillian Erickson Riggs wrote in 1954, in the early days of her widowhood, “is that I love my home. And there is a feeling of safeness and security in the very walls and in the length and breadth of the spacious rooms.... Death will be far preferable to giving up my Faraway home.”

Chiricahua National Monument is less well known than other, larger federal monument and parks in the West. Before we came to Dos Cabezas in 2015, we had never heard of it. Now, however, we treasure its nearness to us -- just down the road -- and at the same time rejoice in its remoteness from urban sprawl, which exists even in parts of Arizona. A certain amount of effort is required to reach Chiricahua National Monument and Faraway Ranch — we wouldn't have it any other way. 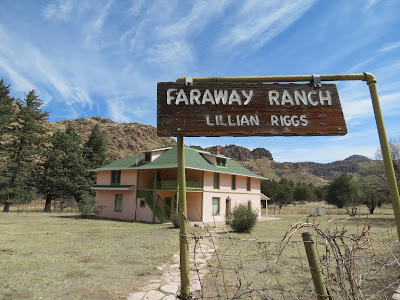