Winter Is Over at Whitewater Draw 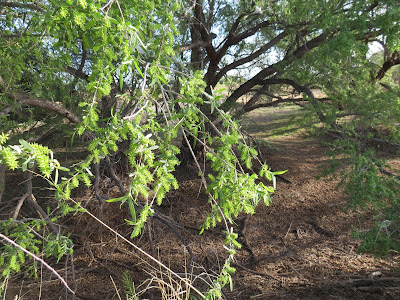 At Whitewater, as in other southern Arizona winter gathering places for migrating birds, the thousands of sandhill cranes have now vanished, gone back to northern breeding grounds. (I wonder if birds arriving in northern Michigan the day before yesterday were surprised by the twelve-inch April snowfall.) Arizona skies seem almost empty now, bereft of the cranes’ ecstatic calls and flights, their winter “beach” at Whitewater fallen silent, where only a month ago thousands of stately birds waded and preened in the sunlight.

Looking out across stretches of mud to a distant puddle in the distance, however, I could see a fairly large bird, and the magic of zoom revealed it to be a white-faced ibis. 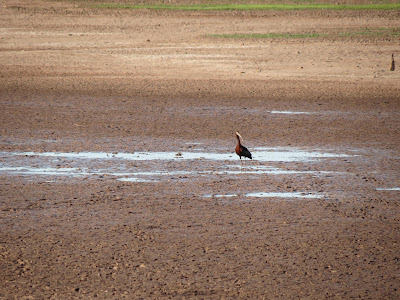 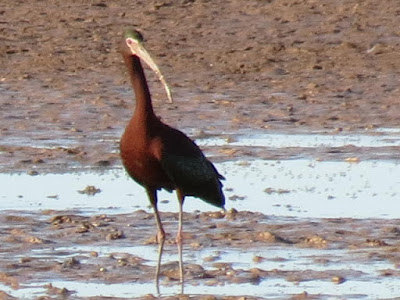 Perhaps in a couple of months there will be a flock of hundreds of ibis in this place. Perhaps by then the summer rains will have recharged the draw. And perhaps this solitary bird came early on a reconnaissance mission. Whatever his story, he is the first white-faced ibis I have ever seen in the wild, my reward for our long drive in search of watery landscapes for the Artist’s (Pisces) soul. 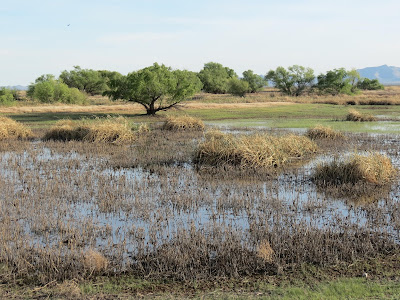 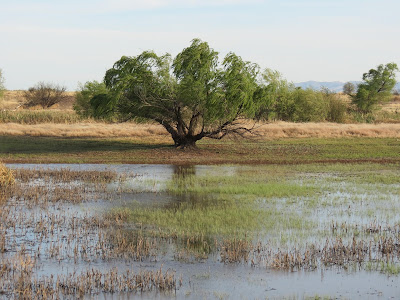 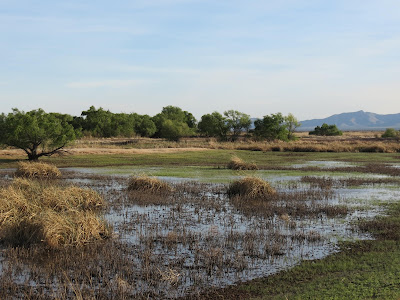 Despite the disappearance of so much water, we found enough to make our pilgrimage worthwhile, and it was thrilling also to see trees green-leafed and flourishing, some by water’s edge and others out across the mud flats.

A final unexpected excitement of the day for us — and the best excitement is often that which comes unexpectedly — was seeing a large bobcat padding across an open area between marshy growth, into which it disappeared much too soon to be captured on camera.

It was a quiet day at the draw, two campers near the entrance and no one else at all on the trails. We went purposely in the late afternoon, for the sake of slanting light, and were rewarded by having the place almost entirely to ourselves. As we were leaving, a young couple in search of the great horned owl under the large roofed structure were foiled in their photographic desires (as I had been with the bobcat) when the owl took flight and sailed out over the wilds, but four humans were treated to the sight of the bird sailing through the air, and that had to satisfy. I was happy for the owl and the bobcat. Soon night would fall, and their domain would be exclusively theirs again. 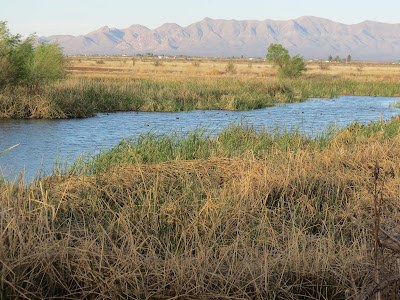 Can't wait for your next adventure into Southeast Arizona.

Dorothy, we made two visits this past weekend to junior rodeo in Willcox, which I love, but I should get around to posting about Portal, because I'm way behind on that one.