After Breakfast With “The Girls”

I didn’t ask permission from the whole group to picture them on my blog, so you’re not seeing eight women here, but I was pleased to be invited out to breakfast with a group of our ghost town neighbors. We met at the Hitchin’ Post in Willcox and all had a real good time around the big round table. After breakfast came more fun, a delightful surprise, though not actually planned for my delight. Here’s what happened.
We were four in the car on the way to town, but Dorothy’s husband picked her up at the restaurant (they were driving down to Sierra Vista on errands for their B&B), which left Cheryl, Terry, and me to return to the ghost town together. While I was saying good-byes to other women I probably won’t see again this year, Cheryl and Terry were conferring in the car, and when I got in they asked, “Do you mind if we swing by the sale barn? Do you have time?” I asked what the “sale barn” was, thinking it might be some kind of rummage sale I’d somehow missed. No, it was the cattle sale barn, the Willcox Livestock Auction! Terry had worked there for years, first on horseback, working cows, and later in the office, and she needed to stop by to pick something up. As it turns out, the auction wasn’t set to start until 11 a.m. (which surprised me; I’d thought they would start earlier), but we took time for a short tour. I’d been afraid I wouldn’t get to the auction grounds this year at all (after a memorable time there in 2015) and had never been in the office area before, worth seeing for its signage. 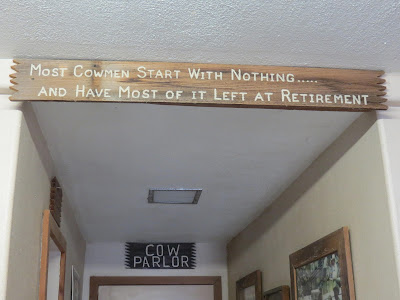 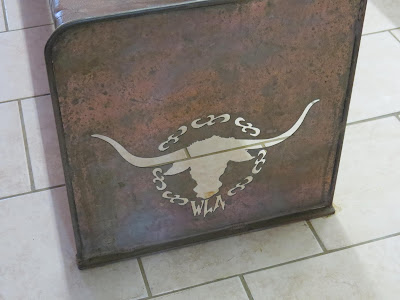 I remembered the sale arena, with wrought-iron designs made by Future Farmers of America students marking the end of each row of seats. Terry pointed out the scale and explained that the whole process is much easier now with the scale in the auction “ring.” But there was no action yet in that area, so we quickly proceeded out to the pens and chutes, where gorgeous sights met my gaze — cowboys on horses, cows and calves of all colors and sizes — along with the incomparable, heavenly aroma of sweet hay and fresh cow manure. Ahhh! Cheryl and Terry kept asking if I needed to hurry back home, and I kept assuring them we could take all the time we wanted! 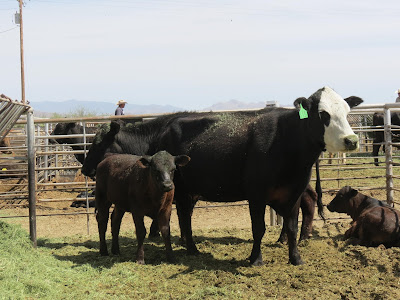 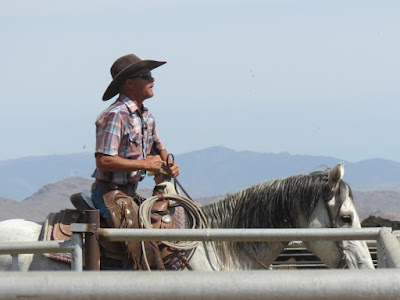 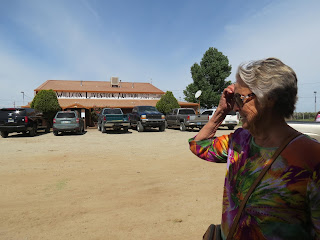 “Do you know how the auction works?” Terry asked when we were back outside. She pointed out the area where cattle for sale were unloaded and their ear tags recorded before they went by the state inspector who checked the brands on each animal. It’s a good system, protecting the ranchers from having rustlers steal and sell their cattle. I remembered that cattle are sold either individually or by groups, with prices offered per hundredweight, and I got the basic gist of the other rules and procedures but was somewhat distracted, honestly, because — well, what is better than the sight and smell of cows? You guessed it, right? 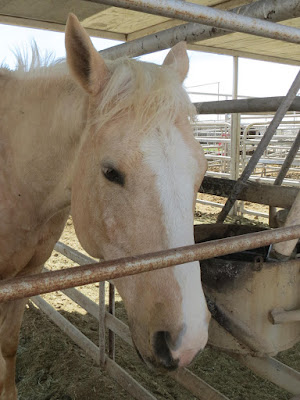 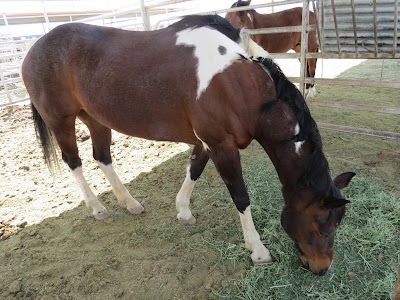 The big blond beauty had the sweetest horsey temperament in the world! At last, after three months in the Southwest, I get my hands on a horse! Was it love at first sight (on my part)? Another horse, a little paint, was a more appropriate size (for me) and had the prettiest little head, and it wouldn’t be right to have only one horse, would it? Horses are herd animals, after all, so if a person is going to have one, that person had better have at least two. And look at the pretty little mini-braids in the painted pony’s mane. 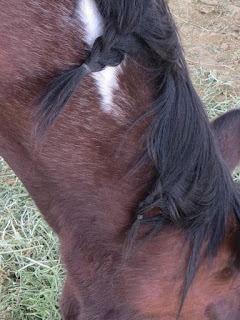 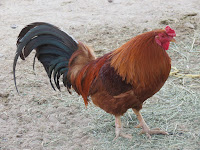 As if this weren’t enough, further distractions (albeit minor in comparison) were provided by the presence of poultry wandering aimlessly wherever they pleased. Handsome roosters, aren’t they? “People just drop ‘em off,” Terry said. “One day someone dropped off ducks!” 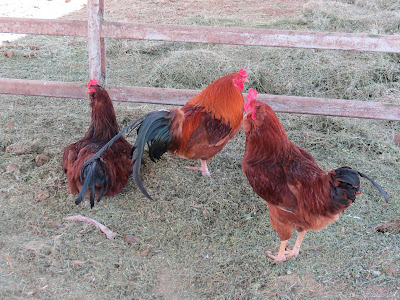 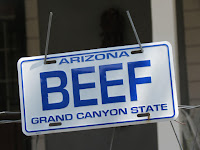 Later, when Cheryl pulled up in front of Terry’s house in the ghost town, I understood the significance of the faux license plate on the fence. Terry not only worked at WLA but grew up on a ranch (as had three other women in the group around the breakfast table), and out here, on the ranches, it’s all about the cows. Well, and about the horses, too, even in these high-tech days, thank heaven! 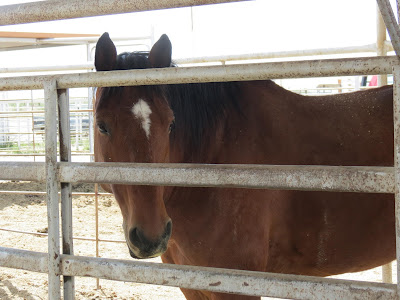 And thank you, Cheryl and Terry, for a wonderful surprise breakfast “dessert”! 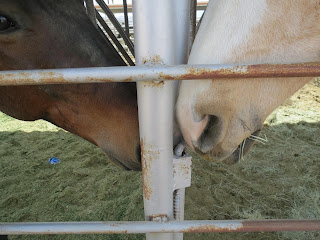 Oh my gosh Pamela, I know you were in 7th heaven with all of your senses at high alert! How absolutely wonderful your morning was with new friends.

You are so right, Deborah -- it was a fantastic morning all around!