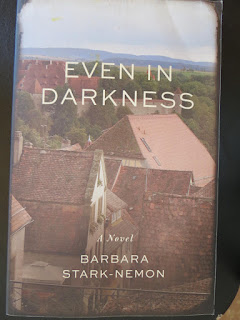 Barbara Stark-Nemon has written an unusual novel, and what makes it even more surprising is that, while the author has invented dialogue and imagined the scenes described, the main character’s life follows very closely the story of an actual person, Stark-Nemon’s great-aunt.

Kläre is eighteen years old when we first meet her in the opening chapter of Even in Darkness. The year is 1913. On vacation with her family, she is contemplating a marriage proposal from a serious young lawyer, and by the end of the chapter, on the eve of the First World War and in the face of her brother’s enlistment in the army, she has decided to put away girlish fantasies and marry the formal and unromantic Jakob Kohler. He will be a good husband.

The years follow inexorably: 1923, 1928, 1932, and life in Germany grows more and more difficult, but Kläre and Jakob have two sons, the boys have a large and loving extended family, as well, and Kläre’s life flows with relative calm. She is happy to take up again an old friendship with Amalie, whose fiancé was killed in World War I and who has now married a widower with five children. The younger son, Ansel, does not live with his father and stepfather but in a Catholic orphanage; however, he does meet Kläre on a visit home to his family.

In 1933 a written directive comes to Bernhardt Steinmann in his publishing house: “On April 1, 1933, all Party members and associated agencies or services will boycott Jewish stores, doctors, and lawyers.” Steinmann’s first concern is for the Jewish authors whose work Berendt Verlag is committed to publishing, but he and his mother also have more personal concerns, and his first chance encounter with Kläre Kohler soon takes on deeper meaning for them both.

As the situation in Germany steadily worsens, Kläre’s older son, Erwin, is able to go to England where he eventually joins the British army; the younger, smuggled out of Germany, arrives in Palestine (not yet Israel), changes his name from Werner to Avraham, and gladly takes on the task of helping to build a new nation. Meanwhile, back home, Kläre and Jakob are seized and taken for “relocation at Theresienstadt, where Kläre and her mother were both relieved and dismayed to be reunited after the mother’s earlier seizure -- relief at finding each other alive, dismay at knowing neither would be spared the sufferings and dangers of the concentration camp.

It was Kläre’s training in massage that had introduced her to Bernhardt Steinmann’s household. In Theresienstadt the same skill ensures her family’s survival when the camp commandant calls on her to be a maid in his living quarters: because she holds a certificate of massage training and the commandant suffers from headache and neck pain, Kläre is able to bring back to her mother and husband a few extra morsels of food. They survive.

Not the end of the story.

What I have told you is only the sketchiest outline of what takes place in the Kohler family prior to and during World War II, but it is the character of Kläre – based, remember, on a very real person – and the author’s skill in conveying the depth of her personality that makes this story as deeply moving as it is. Kläre’s decision to remain in Germany following the war and the life she makes for herself following the death of her husband are unexpected and almost incredible. So successful is the fictional recreation, however, that the fantastic seems somehow inevitable.

“I didn’t want this book to end!” said the customer-friend who addressed me, the day after she finished reading it, as “Goddess of Books.” The accolade was an exaggeration, but when I had the privilege of reading this novel in manuscript, I didn’t want it to end, either. Additionally, I was impatient to share it with customers and friends in my bookstore, so the April 2015 release made me very happy indeed.

And now a greater happiness is in store, because Barbara Stark-Nemon will be at Dog Ears Books next Wednesday, August 5, at 7 p.m. to read from her book and have what I know will be a wonderful conversation with the bookstore audience that evening. I urge everyone who can possibly make the event to join us! It will be a memorable evening.

Okay, the postscript today, April 8, 2016, is that this book was awarded the Gold Medal for European fiction by the Independent Publisher Book Awards. Well deserved, Barbara! And yes, it is a compelling story, to say the least.