ACTION AND SUSPENSE – WITH DOGS! 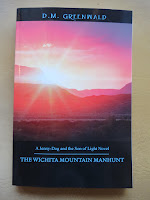 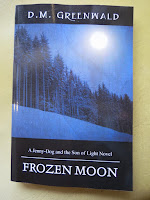 Was it really only last year that I was first introduced to Joshua and his dogs in the first book of David Greenwald’s trilogy? To recap (for those not following the link), in that first book, Frozen Moon, protagonist Joshua Travis and his dogs managed to locate and save the life of a little girl lost at a Vermont ski resort, against all odds. 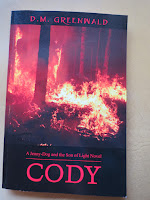 Next came Cody, the second novel, with a journey into Joshua’s past and an attempted forest fire rescue in Montana. That fire and a rescue that was only partially successful haunted the dog trainer’s life waking and sleeping for years to come, an obsession on which his marriage foundered, although Frozen Moon made it clear that the separated lovers are still very much in each other’s hearts.

And sure enough, at the beginning of The Wichita Mountain Manhunt we find Joshua and Kristian happily reunited and visiting old friends in California. Jenny-Dog is with them, of course, thirteen years old and slowing down now, as old dogs will.

Manhunt’s action is in Oklahoma, where one Girl Scout on a camping trip has been brutally murdered and a second, daughter of a very rich and powerful man, has disappeared. A kidnapping? Once again Travis and his highly trained and gifted dogs are called in. Prior to the Girl Scout’s disappearance, Joshua always refused to participate in manhunts, and he is still reluctant. Kristian has even stronger misgivings. She almost lost him on his last rescue. Jenny-dog, moreover, is getting old. It’s a bad situation for all three of them. But Joshua knows it is a much worse situation for the missing child and her family.

Deputy Greywolf, a Kiowa Indian, provides the continuation and eventual resolution of mystical elements from the first two novels, and, as before, Greenwald provides a tight, detailed plot with unexpected twists and turns. You’ll think you know where the author is taking you, but – don’t count on it!

Greenwald’s trilogy brings to readers tales of outdoor “adventure” with life-or-death stakes. The plots are carefully and intricately constructed, the author’s writing never falters, and he is as skilled at conveying emotion as he is in getting across factual details. Of the main character, one reader of Frozen Moon put it well:

My women friends and I would phrase that a bit differently, but we can easily understand a man feeling that way about Joshua and his dogs. Man or woman, everyone who has purchased Frozen Moon from me and read it has come back for the sequels. What does that tell you?

And now for the best part! David Greenwald is coming to Northport! I will be meeting him for the first time, and you can, too, on Saturday, July 25. He will be here from 3 to 5 p.m. to read short excerpts from all three books in the series, to answer questions from the audience, and to sign books for purchasing customers. As always with events at Dog Ears Books, there is no admission charge, so don’t miss this opportunity. It will be Greenwald's first appearance in Northport, and I want my little town to do him proud. 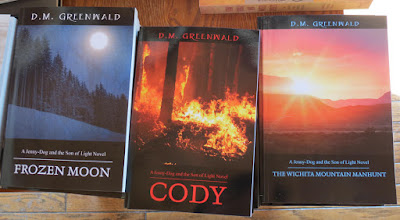