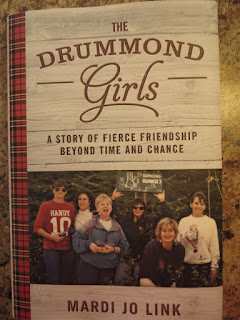 
Back home I didn’t wear a watch, even though there were things to do and places to be at appointed times. I had a good natural clock inside me, and whether it was my sons’ naps, bedtimes, mealtimes, or my shifts at work—I was never, ever late. When we docked on that island, I felt a mental click, as if a series of invisible gears was grinding to a stop. It was the timepiece in my mind turning itself off. -       Mardi Jo Link, The Drummond Girls: A Story of Fierce Friendship Beyond Time and Chance

You met Mardi Link first as a crime writer. I was so scared by the title of her book, When Evil Came to Good Hart (“an up north Michigan cold case,” promises the cover), that I didn’t dare start it in 2008 when it came out. Only after reading Isadore’s Secret in 2009 and being transported to an earlier century in Leelanau County was I so taken with Link’s writing that I went back to the first book. Yes, very well done, both.

Nonfiction is her specialty, but Link gave us something different with Bootstrapper, a memoir of economic and emotional struggle that also somehow managed to be laugh-out-loud funny again and again. What’s it like to try to survive as a writer in northern Michigan while raising a family as a single parent? Random House released Bootstrapper in 2013, and it was named a Michigan Notable Book for that year, withWicked Takes the Witness Stand: A Tale of Murder and Twisted Deceit in Northern Michigan marking Link’s 2014 return to true crime writing.

I wonder if Mardi has two different fan bases, one for the true crime and a second for her memoir writing. Something tells me most of her readers are like me and will read anything she writes. So now, enter The Drummond Girls....

Jill, Linda, and Andrea had gone to Drummond Island once before on a fall weekend getaway, and Mardi, the newest waitress of the four at Peegeo’s, was thrilled to be asked to join them in 1993. She had only been working at the bar for four months when the invitation came along, and in the car on the way up she felt “provisional.”

If I fit in, I’d be included. If I didn’t, I wouldn’t. On Drummond Island but back home, too.

I’d still have my waitress job, the four of us would still work together, they’d probably even still be friendly to me, but every woman knows friendly is not the same thing as friends.

Mardi may have felt more “provisional” than another woman in her place, as she was afflicted, in her then-husband’s words, with a “completely useless tendency to overthink everything to death,” but I think she is right about that thing that “every woman knows,” too. Also, because her family had moved around a lot when she was young, she had not had a chance to form close, lasting friendships. And yet, one wild weekend with new friends, away from life’s ordinary responsibilities, turned into an annual event. Over the years the number doubled from four to eight, and readers come to know them all.

Like a book club or writers’ group (for my mother’s era) a bridge club or any group of people getting together regularly over a long period of time, the Drummond Island girls (the author insists on and explains the appellation) develop a strong bond. Their annual getaway is not, however, a time to hash over personal problems, and sometimes only in retrospect does the question arise: Should I have known? Could I have helped? Usually it seems that the simple commitment, “unless dead or pregnant,” to go off once a year together is all the medicine they need, better than soul-searching or consciousness-raising. One year one of the woman begs off the trip, however, leaving a regret that Link still carries:

The Drummond Girls covers much the same period of the author’s life as Bootstrapper but with a different focus. The earlier memoir was about day-to-day life – Link’s writing career, children, divorce, dating, and everything it took to keep a roof over her family’s head, heat in the house, and food on the table. The new book is all about friendship as it grew and deepened and flourished in a somewhat oddly assorted group of northern Michigan women. Lessons Mardi says she learned about friendship emerged organically over the years and are presented the same way. She does not hammer away at them or set them apart from her narrative in an artificial, didactic fashion. Instead, chapters follow chronologically and simply, one year at a time, and, as with Bootstrapper, when Link writes about her own life, she is honest and direct.

Does Mardi really “overthink everything to death”? Well, no one can accuse her of overwriting anything to death. She tells her stories with a light touch that will elicit hoots of laughter, occasional nervous gasps, and a few surprising shivers of recognition.

What do her friends think about having their escapades recounted for public consumption? It was their idea!

The other day a visitor to my husband’s gallery arrived before the lights had been turned on, before the artist had arrived, but when I apologized he smiled and shook his head. “We’re on vacation,” he said. “We’re on island time.” How refreshing! Sometimes, I’ve noticed, people on vacation forget to forget about time. How great that Mardi and her friends could relax so completely with only a weekend at their disposal!

Although the author and her friends make their annual getaway in the fall, The Drummond Girls is the perfect book to read in summer. It’s perfect for people on vacation and for those of us whose vacations will come later in the year. In fact, while I was reading this book, I was on island time myself.

I'm more drawn to Link's true crime writing and found her Wicked Takes the Witness Stand an amazing story. It was hard to believe such corruption could exist. The amount of research she put into this book was unbelievable. I like Link's "home-grown" style, which comes through in both her true crime and memoir writing. I've also found Link unselfish and helpful in giving help to new writers. Thanks for this wonderful review, Pamela. This new book is sure to be another winner.