Snippets from My World Today 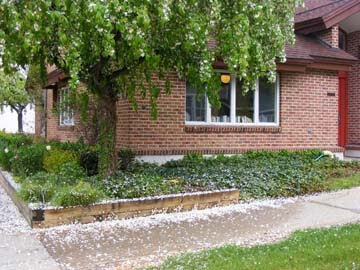 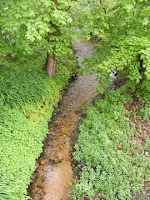 That is not snow in front of the Leelanau Township Library (don't forget book discussion group this coming Wednesday at 1 p.m.) but petals drifted to ground from the ornamental crabapples. Soft spring rain arrived yesterday, bringing up the level of the creek I would still like to see renamed Wildcat Creek....

Last night was a lovely evening at home for reading on the porch until it got too cool for comfort, after which reading indoors by the fire was equally lovely. Finally, after a movie, came reading in bed, and that was good, too. I confess that the most recent book on my list as of today, one I read yesterday in its entirety, is a book I have read before, Anne Fadiman’s Ex Libris. It was just as good the second time around.

When I read about food, sometimes a single word is enough to detonate a chain reaction of associative memories. ... The word ptarmigan catapults me back ten years to an expedition I accompanied to the Canadian Arctic, during which a polar-bear biologist, tired of canned beans, shot a half dozen ptarmigan. We plucked them, fried them, and gnawed the bones with such ravening carnivorism that I knew on the spot I could never, ever become a vegetarian. Sometimes just the contiguous letters pt are enough to call up in me a nostalgic rush of guilt and greed. I may thus be the only person in the world who salivates when she reads the words ‘ptomaine poisoning.’ - Anne Fadiman, Ex Libris

The movie? Don’t ask! No more Werner Herzog! I have suffered enough! Books are better!

So before falling asleep, clearing my mind of W.H., I got all the way to Part Four of A Suitable Boy. At the end of Part Three Lata was carried off to Calcutta by her mother to get her away from an “unsuitable boy,” and in Calcutta she will have to put up with her horrible tyrant of a brother, so there is plenty of conflict ahead, obviously, and I will not abandon this tome of over 1400 pages after a mere hundred and eighty-seven. I’ve thought of including a gadget on this blog, “Pages Read So Far in A SUITABLE BOY: 187,” to be updated as appropriate. That way, if ever I might be tempted (as I have not yet been) to give up on the book, the thought of public shame would be enough to keep me reading. Public? Not all that public. One or two people might notice. Still (my thoughts continue), it might be rather amusing.... 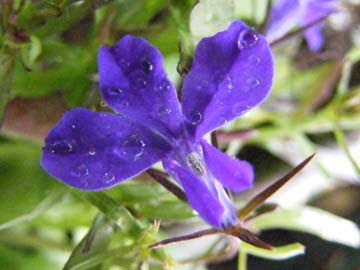 And now at Dog Ears Books I have three books by Bob Butz:

(1) An Uncrowded Place: The delights and dilemmas of life Up North and a young man’s search for home; (2) Beast of Never, Cat of God: The Search for the Eastern Puma; and, finally, (3) Going Out Green: One Man’s Adventure Planning His Own Burial. I was fine with cremation as a plan until I found out how much energy is consumed along with the body. (Had I known, our Nikki would have been wrapped in one of her old blankets and laid to rest in the ground.) Not your kind of subject? What about those “big cat tracks” birders found in the woods of our neighborhood? Cougar, mountain lion, puma—whatever you call the cat, it scares me much more than why bears or wary coyotes.

Geese flew over the house this morning, honking.

Tonight there is a performance of “Cinderella” up at the NCAC, performed by Northport students, and admission is free. Plan to be in your seats by 7 p.m. 7:12: [Gotcha! It was "Alice in Wonderland," and you missed the curtain!] 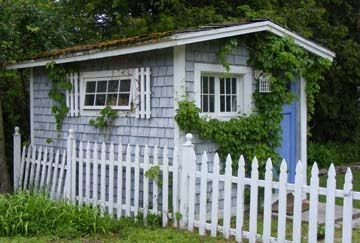 This is the last weekend before Memorial Day weekend. Tomorrow is the last Sunday the bookstore will not be open until after Labor Day. Drive-Thru BBQ next door also shifts to a seven-day week beginning next weekend, and our local branch bank, after today, will be open on Saturday mornings. Here are a few other sights from Saturday morning, May 22: 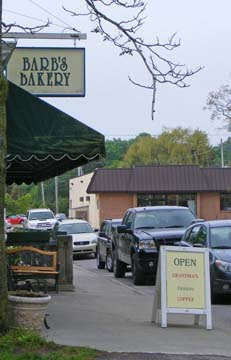 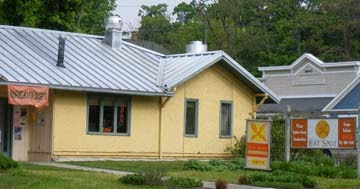 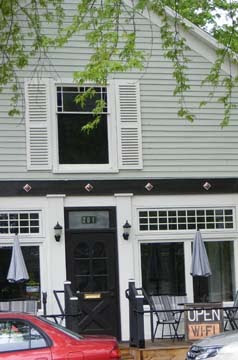 Plenty of places offering morning coffee and sustenance in Northport, and this is only a partial list.
Posted by P. J. Grath at 7:29 AM

The Wi-Fi sign got me to thinking. If I replace my laptop--a whole 'nother story--I could hop in the car, drive to Northport, log onto the WiFi connection, and download all the things I need to download. Then I could stop in at Dog Ears, have lunch at the Drive Thru, and amble back to Eastport, all in less time than it would take me to download the !#%& files over my sloooow dialup. I've had worse ideas.

Sounds brilliant to me, Gerry. There's also Wi-Fi at Brew North, the Filling Station and the library. Don't come tomorrow, though--last Dog Ears Sunday closed. And Monday I won't be there all day, though Bruce might be. Tuesday! Good day! Or any other day for the rest of the summer.

Those are welcome sights. Would give anything for a cinnamon twist ... guess it will have to wait.

These are not "snippets", Pamela! These are full-blown lovely stories. :) I am 74.6% convinced that I read A Suitable Boy, but perhaps not. Would need to read a review to see if something jogs the memory. The only reason I would want a Goodread account would be to record books which are too easily forgotten by this memory...

There will be cinnamon twists every day! Well, I can't promise, but it seems like a safe bet.

Kathy, although I list only author and title of books I've read, without commentary, I find that seeing the title usually brings back the story. In last year's list, there's only one title that doesn't do that. And I guess I'm too lazy to keep a detailed list. Other things to do!