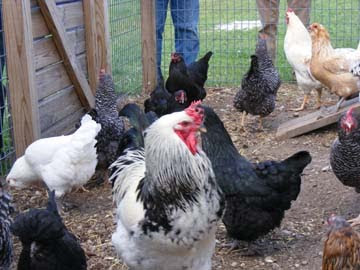 BEFORE I BEGIN, HAPPY 95TH BIRTHDAY TO MY UNCLE JIM! He's my father's side of the family (oldest of four), but I think he would thoroughly understand today's post. Uncle Jim worked with the CCC and was the tree expert of my childhood, so we shared a great love of nature and the outdoors.

Okay, all day Wednesday I looked forward to six o’clock and the MSU Extension program on “Chickens in the Backyard.” (Actually, I’d looked forward to it all day Tuesday until I learned I had the date wrong.) After closing the bookstore in Northport, I touched down briefly at home, long enough to grab a piece of toast with almond butter and tell David what was in the refrigerator that he could put together for a dinner. Surprise! He decided to come with me!

Why is this so surprising? Because my husband has been seriously bird-phobic all his life. The first time we went to a fair together, he waited outside the poultry house while I toured the chickens. The first time we camped together on the shore of Lake Superior, before he brushed his teeth in the morning at the shoreline he handed me a towel, saying, “Flap this if any birds come near.” I thought he was kidding. He wasn’t. The last thing he ever wanted in his life was chickens, the scariest (to him) bird of all.

I, on the other hand, have wanted chickens for as long as I can remember, thanks to one blissfully happy month spent with my maternal grandmother when I was six years old. Grandma had chickens. She had a cow. Grandpa had an enormous vegetable garden and an acre of raspberries. Their backyard was an orchard: apple, pear, peach and plum trees, with a grapevine-covered trellis over the brick path that led from house to outhouse. Yes, outhouse. No indoor plumbing. But to me it was heaven. And I’ve been standing outside the gates peering in longingly all my life. 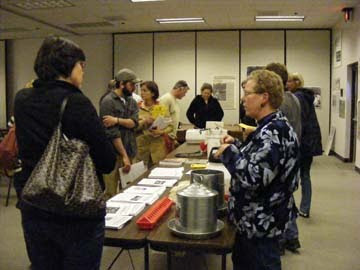 It was a pretty big crowd at the MSU Research Station on Center Highway last night. Pam Schmidt introduced speakers Heather Bardenhagen and Chad Jordan and kept things moving along. There were lots of questions, more than one funny observation, and a high degree of enthusiasm tempered with a certain amount of anxiety. The more information we got, the harder it was to believe the claim that “chickens are easier than dogs.” Incubating, watering, vaccinating, and on and on. Still, as one participant pointed out, the discussion by that time had gotten pretty far away from four chickens in the backyard. My grandmother had 100 laying hens and sold eggs from home and at the farmers’ market. Regulations (don’t get me started on that, either!) are much tighter these days, and I wouldn’t want to try to replicate my grandmother’s flock, but hat doesn’t mean that to have a little backyard flock you also have to have a doctorate in animal husbandry.

Near the end of the presentation at the Research Station, before we adjourned to Chad’s Delight of Life Farm down the road, Heather Bardenhagen addressed the question of meat breeds. She and her husband were very happy with Red-Bro, a breed developed in the U.K., but when Cornish crosses came into the discussion she said not to ask her because she couldn’t say much good about them. Everything she did say I had already heard or read elsewhere: bred for quick weight gain and heavy breasts, they are ungainly birds with a lot of leg problems. “They didn’t even look like chickens to me,” Heather said. “I told my husband, if that’s what we have to have, I don’t want to do it.” The Cornish cross is today’s industrial meat chicken. But there are plenty of other breeds—older, hardier chickens that have stood the test of time. 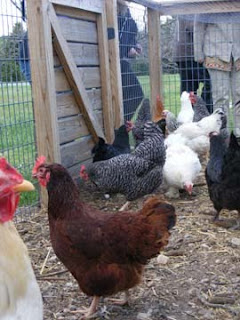 Down the road were Chad’s chickens, and he likes having different breeds. He also has four or five roosters and enjoys letting the birds mate across breed lines to produce hybrids. This farm was not a factory in any sense. I couldn’t stop smiling. Earlier, at the beginning of the presentation, when Chad opened with the question, “Why do you want to have chickens?” I thought that the most honest answer I could give, one I kept quietly to myself, was, “Because my grandmother had chickens.” There at the coop, as we went in five or six at a time to see the chickens’ housing, another woman sighed and said to me quietly, “This smell takes me back to when I was a child and my grandmother had chickens. It’s just like being back there again.” You, too! Me, too!

The real miracle of the evening, though, was that David went into the chicken house. He didn’t flinch, and he didn’t cower. He stood tall and took it all in with interest. He especially admired the largest rooster.

“What about coyotes?” someone asked, and another woman (Mary from the Business Helper) said, “Get horses. Horses will kill coyotes.” I completely loved that answer! 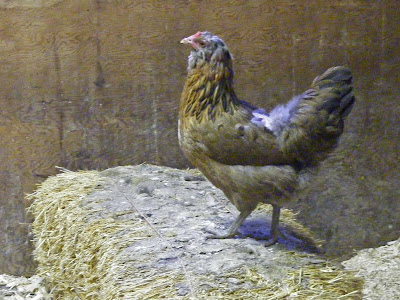 Back beyond the chickens and the seedbeds, Delight of Life Farm had four new little pigs, and they were the most appealing, drollest creatures imaginable. David liked the brown one best. The black one had a deformed ear but was still darned cute. One of the little pink guys, however, seemed to have the most curious, outgoing personality. 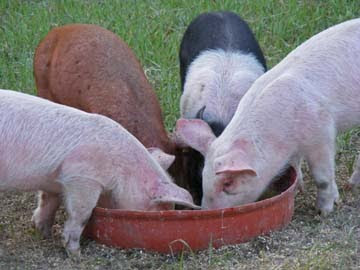 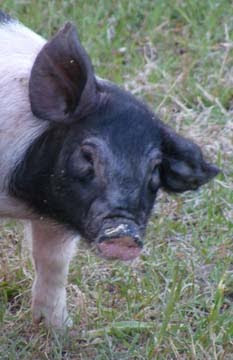 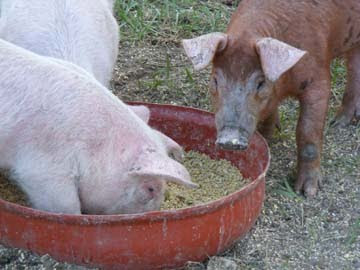 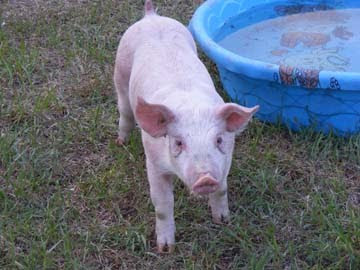 There are probably not pigs in my future. I’ll be more than satisfied if there are chickens.

When we got home, Sarah couldn’t stop sniffing me. When we went outdoors, she sniffed everywhere I stepped. Have you guessed? Yes, there was a little manure on the bottom of one of my shoes. Well, Sarah, I thought it smelled pretty great myself!

This morning when I woke up in our old farmhouse, still smiling, David and I were under the covers, and Sarah the Bed-Hog had scooched up between us on top of the covers, making it a tight squeeze in the little old double bed. Man by my side, dog on the bed, manure on my shoe, chickens in my future—what’s not to smile about?

I’ll be ordering a lot more books on homesteading topics this spring, for sure....
Posted by P. J. Grath at 6:13 AM

Chickens are wonderful. My grandmother kept them, too, and I loved everything about them, from the tiny fluffballs gathered around the galvanized watering thingamies to the fragrance of feed mixed with chick poop to the clucking hens and their warm eggs. Everything right up to the messy business at the chopping block, but that was Gram's job, not mine, and I accepted the necessity.

I never liked the geese, though. I recommend you keep David safely away from geese, lest his phobia return in full force.

And horses will kill coyotes??? Can this be true? That would mean that wild does not always win, and would require a complete revision of my world view. Must investigate.

As for geese, Chad said something about them that made me think, Oh, no! Also, I remember being surrounded by a flock one time and being very uncomfortable as they edged in closer and closer, hissing in a very threatening manner. No, David and geese would not be a good mix at all.

I've met a few people who find birds a bit daunting. More than a few must be on our municipal council as we're not allowed keeping any chickens in or near Halifax. Some people fought the by-law beak and talon a few years ago but to no avail.

That is very interesting about horses killing coyotes.

So we in Michigan can do some things you can't do in Halifax? Actually, I live in the country, property zoned agricultural, but Michigan's right-to-farm protection has been interpreted to give city folks food-raising rights. Single-family households can have up to 4 chickens, no roosters, and there's a distance the chickens have to be housed from the neighbor's house. Also, no outdoor slaughtering allowed in the city. Still, urban chickens are a big new American deal.

No one yet has said how cute the pigs are!