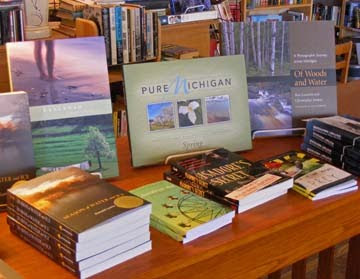 He poked his hands down into the net and stirred the smelt like they were some kind of broth in the river. He looked like a mad chemist or some ancient priest....

- Michael Delp, As If We Were Prey

In early March, the hills of Leelanau County feel like dark closets, full of some bearish fear. Where my small home perches on the edge of a ravine, the woods and slopes are empty but for the crust of old snow....

They are amazing, poking through the dead leaves like little rebels. Though I have been admiring the tiny wildflowers and buds that signal the onset of spring in an otherwise dreary woods, the mushrooms are more compelling.

Service and Friday drove to the Knotty Pine Cafe in Gaastra, an old mining town six miles from Iron River. They took a table by the wall. The counter seats were filled with elderly gents in plaid shirts, suspenders, scuffed boots, and faded baseball caps, all of them smoking hand-rolled cigarettes and yakking in high-speed Yooperese.

When I used to drive home in southern Indiana, I’d often notice what looked like a cloud of smoke on the horizon, far out across the endless flat fields of corn or soybean stubble. The smudge would darken, then dissipate until it was hard to make out, then just as suddenly draw together into a black puff again. Sometimes the “smoke” would veer suddenly in one direction or another, even when there was no wind.

What I was watching wasn’t smoke at all, but the cloud made by 30,000 or so far-off red-winged blackbirds. 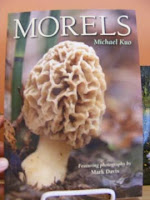 Those are only a few whispers of all the new books have to say. Don't you want to read more?
Posted by P. J. Grath at 12:38 PM

Oh yes indeed I do. So many wonderful books, so little time. Part of me longs to dive into the stories about my place and time, to see what the neighbors are thinking about, while another part of me wants to go haring over the hills to a whole new world. And a person can do all that in books, lovely books.

Gerry, I'd love to go "haring over the hills"--great expression!--"to a whole new world" with a bag of books slung over my shoulder. New horizons! Fresh vistas! No wonder all those people flocked to Canterbury in the old days, eh?

Oh, and as I was walking in the bookstore door this morning, there was FedEx with a box of Elizabeth Buzzelli's new book, DEAD SLEEPING SHAMAN. Now I won't mind the COLD so much this week....