Oh, We Were So Modest Back Then! 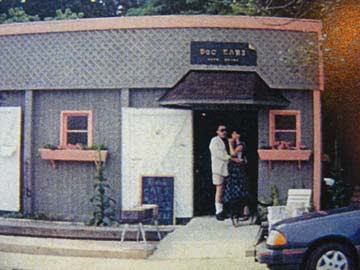 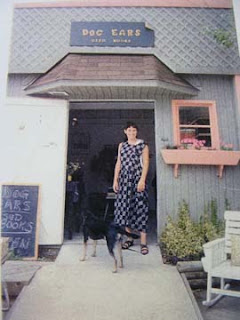 Here are some of my old pictures of the original Dog Ears Books. This is the little shed and our first cleverly dog-eared sign. It was 1993 on Waukazoo Street. Clayton Weeks was still owner of Woody’s Settling Inn (named for Woody Allen, by the way, not for Clayton or any other “Woody,” which has confused many people over the years) and owned the little shed, recently removed from the property. Dog Ears. “What are you gonna sell? Is it like elephant ears [at the fair]?” people asked in June, as we were busily measuring and sawing and pounding. Then, at last, OPEN! How young we look to me now, 17 years later!

There followed an interlude in Traverse City (Union Street) until my vow to return to Northport landed us in the little bark-covered building on the corner of Mill and Nagonaba. Somewhere I have pictures of Nikki inside that building, but here’s a corner of it, featuring my fledgling perennial garden and the end of the new sign: 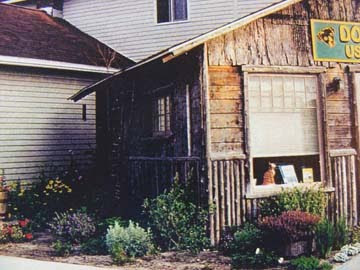 And here’s our old dog, Nikki, or Neffer-Nikki, as she was called for that year’s dog parade, “The Treasures of King Mutt.” She won Best Historical Reference for her impersonation of the inventor of pup-papyrus. Nikki, the original Dog Ears dog! 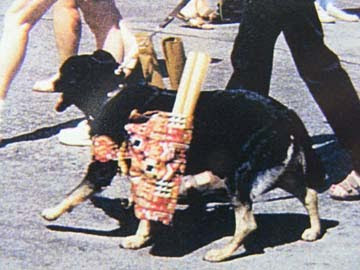 Such were our humble beginnings. No heat, no plumbing, no room to swing a cat, but a thrill ran through my heart when people asked, "Do you have a poetry section?" They really did ask that! And I had a poetry section!
Posted by P. J. Grath at 4:40 AM

I just love paging through a friend's photo album, and hearing the stories.

And seeing the beloveds. That Nikki was Some Pup.

May your 18th summer be as filled with excitement as your first.

Thanks, Gerry! One bit of excitement I won't have and won't miss is the stomach-wrenching nervousness of every morning that first summer, thinking (as I swept the sidewalk in front of the shed), "Oh, no! I'll have to talk to strangers again today!" Got over that, at least. No strangers enter the doors of Dog Ears now, only welcome guests.

Aren't old pictures great? I miss the days of slide shows, too. When the screen went up and the projector came out and some people sidled toward the door in hopes of "escaping," I settled in happily for a vicarious trip into someone else's life.

This was fun, Pamela. I can imagine people wanting to know all about the name Dog Ears. All your photos looked so nostalgic. (And yes, I did look at them!)

Well, Kathy, I'm sure THESE photos looked flat, but it was a nostalgic post for me, to be sure. Kids who were born when my bookstore was in that building are in high school now. Wow!

Loved the look back. Nikki was a cool dog, and I liked the shack and the bark building too!

Nikki was the best dog she could be, and she had a wonderfully full life with us. We were all lucky on that one, as we are with Sarah. I've been lucky with the bookstore, too. A few of my friends are people I met first as customers back in 1993, and that feels good.

Thanks for sharing some of your history. I have long admired and enjoyed that perenniel garden and never knew you had created it!

The garden could use a makeover, as you've no doubt noticed. Sally from Dolls and More planted a lot more bulbs last year, so it's been a colorful spring with daffodils and tulips, but she doesn't have time to tear out all the stuff that needs to be torn out before new plants could go in. Have you noticed that the library perennial garden is getting a makeover this season? Can't wait to see if they will make changes in what is always such a beautiful planting.